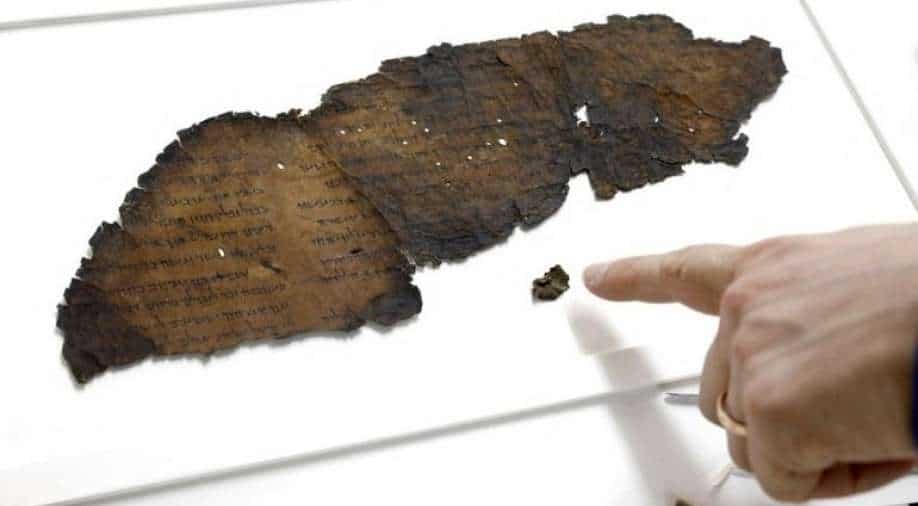 Oren Ableman, a Dead Sea scrolls researcher of the Israel Antiquities Authority (IAA) -- who examined scroll fragments with the aid of advanced imaging equipment and revealed a previously unseen script -- points at a small scroll fragment containing the hidden text at the conservation laboratory of the IAA in Jerusalem Photograph:( AFP )

Following a years-long dig in caves and cliffs in the Judean desert, the authority said it had also discovered a cache of rare coins, a six-millennia-old skeleton of a child and basket it described as the oldest in the world, at over 10,000 years

Scientists in Israel have unearthed pieces of a biblical scroll dating back some 2,000 years, describing the find as one of the most significant since the Dead Sea Scrolls.

"For the first time in approximately 60 years, archaeological excavations have uncovered fragments of a biblical scroll," the Israel Antiquities Authority (IAA) said in a statement.

Following a years-long dig in caves and cliffs in the Judean desert, the authority said it had also discovered a cache of rare coins, a six-millennia-old skeleton of a child and basket it described as the oldest in the world, at over 10,000 years.

The finds are a result of survey of some 80 kilometres (50 miles) of cliffs in a desert area spanning southern Israel and the occupied West Bank.

The fragments of the scroll include passages written in Greek from the Book of the Twelve Minor Prophets, part of the Hebrew Bible, the IAA said.

One fragment from the book of Zechariah reads: "These are the things you are to do: Speak the truth to one another, render true and perfect justice in your gates."

Although most of the text is in Greek, the name of God appears in ancient Hebrew script, the IAA said.

Israeli archaeological excavations in occupied Palestinian territory have sparked controversy, but the Palestinian Ministry of Tourism and Antiquities did not respond to requests for comment.

The IAA cooperated on the project with the military branch responsible for civil affairs in the Palestinian territories (COGAT).

Spokeswoman Yoli Shwartz said it was one of the most significant discoveries of a Biblical text since the Dead Sea Scrolls.

Those scrolls include some 900 manuscripts found between 1947 and 1956 in the Qumran caves above the Dead Sea in the West Bank. They are some of the earliest biblical texts ever discovered.

IAA director Israel Hasson said the survey had begun in response to looters who slipped into the caves.

In a statement, he called the finds "a wakeup call" for devoting more resources to continue the project, which has only surveyed about half of all the cliffs in the desert.

"We must ensure that we recover all the data that has not yet been discovered in the caves, before the robbers do," Hasson said.