Authorities ease restrictions in Jammu and Kashmir ahead of Eid

The authorities on Sunday eased restrictions imposed in Kashmir valley to facilitate people ahead of Eid.

People were seen rushing to essential stores and bakery shops which were partially open.

Around 300 telephone booths established in Jammu and Kashmir: Report

The civil administration informed about the measures taken for the general public and employees of Jammu and Kashmir, the statement from the Raj Bhavan said.

Norway mosque shooting to be investigated as possible act of terrorism: Police

The shooting at a mosque near Oslo is being treated as an "attempted act of terror", Norwegian police said Sunday, with the suspect appearing to harbour far-right, anti-immigrant views.

Sports Bill will be a reality soon, says Kiren Rijiju to WION

Union Sports Minister Kiren Rijiju on Saturday said that Sports Bill will be a reality soon and added that he will ensure that it covers all sports bodies. 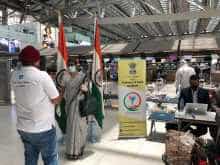