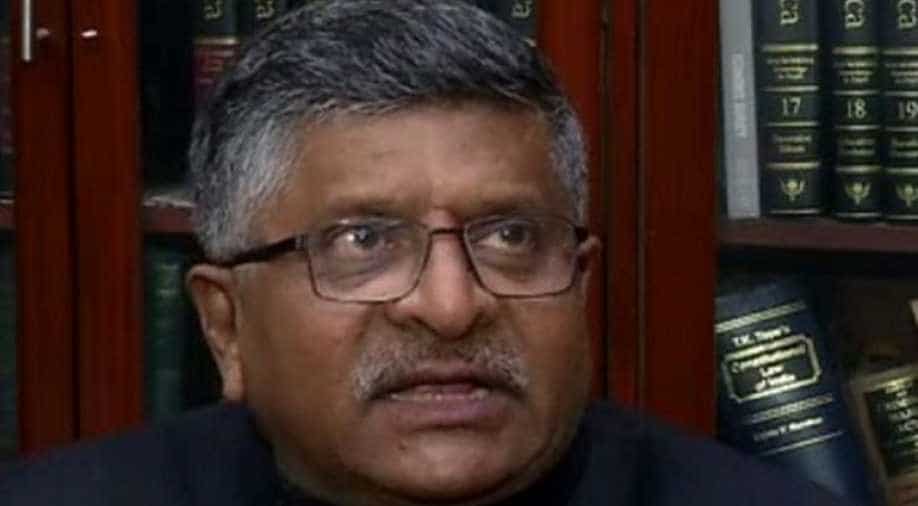 'Travelling is your private affair. But everything is recorded if you take public transports like flights. What you eat is your personal choice, but if you eat in a restaurant it is recorded by a bill,' Prasad said. Photograph:( ANI )

Union minister Ravi Shankar Prasad today appealed not to "overblow" the issue of data breach, even as he asserted that innovations taking place in the country as part of digital revolution, cannot be killed under the garb of privacy.

Speaking at the inauguration of the 6th Annual International Commerce Conference here, he lamented that the country missed the industrial and entrepreneurial revolutions in the 80s and 90s due to licence raj.

"But, it (India) should not miss the digital revolution," Prasad said while mentioning the Justice Srikrishna Committee, which is working on making a robust law for data protection and anonymity.

"Travelling is your private affair. But everything is recorded if you take public transports like flights. What you eat is your personal choice, but if you eat in a restaurant it is recorded by a bill. Therefore, let us not overblow this issue of privacy," he said.

The law minister also said that innovations happening in the country cannot be killed under the garb of privacy.

Also read: New security layer in Aadhaar is like locking the stable after horses have bolted, says Chidambaram

"What is strictly private is medical and banking records. When you talk about privacy, there should be a balance between data availability, data utility, data anonymity and data privacy," he said.

Prasad also talked about how a number of fake accounts and teachers were identified with the help of Aadhaar cards, thus helping the government save precious resources.

"Aadhaar does not contain community, religion, medical, educational or income reports. The system instead contains iris and finger prints kept in a safe and secure encrypted form which cannot be broken into even by the billionth of efforts," he said.

The two-day conference on 'Digital Outreach and Future of Marketing Practices' was attended by Delhi University Vice Chancellor Yogesh K Tyagi among others.

A newspaper report had recently brought to the fore alleged Aadhaar data breach.

Delhi Police had on Monday registered an FIR on a complaint by an UIDAI official following the report on data breach of more than 1 billion Aadhaar cards, naming the journalist behind the story.

The police was informed by the official that the correspondent, posing as a buyer, had purchased a service being offered by anonymous sellers over WhatsApp that provided unrestricted access to details of Aadhaar numbers.