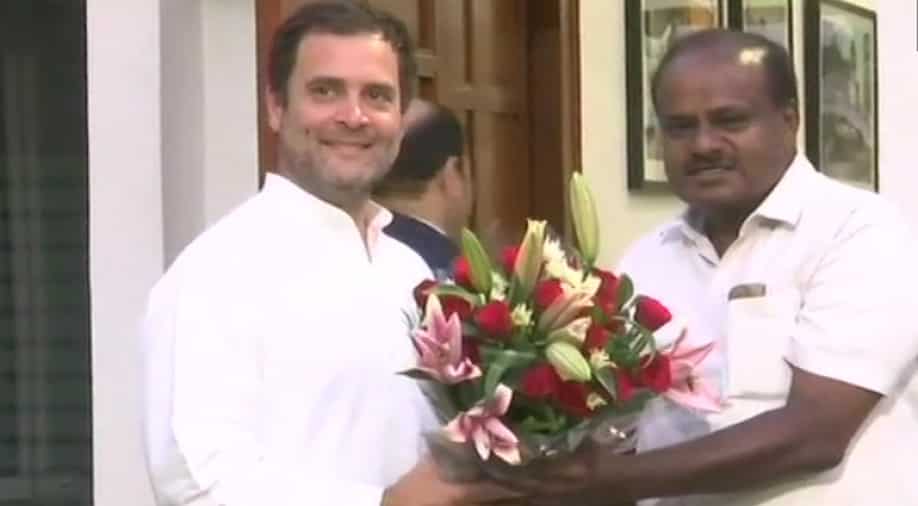 In an emphatic endorsement of Karnataka's ruling JD(S)-Congress coalition by the voters, its candidates Tuesday won both the assembly constituencies and two of the three Lok Sabha seats in the bitterly fought by-polls held on Saturday.

The byelections came as a major setback for the main opposition BJP ahead of the 2019 elections with the party losing the Ballari Lok Sabha seat, considered a stronghold of the controversial mining barons — the Reddy brothers.

VS Ugrappa of the Congress won Ballari beating BJP's J Shantha, the sister of B Sriramulu, a key aide of the Reddys and former MP from there.

The BJP won only the Shivamogga parliamentary seat, the pocket borough of the Leader of the Opposition B S Yeddyurappa. His son BY Raghavendra beat Madhu Bangarappa of the JD(S). Madhu is the son of the late S Bangarappa, the former Congress chief minister.

Chief Minister H D Kumaraswamy's wife Anitha bagged the Ramanagara assembly seat by a spectacular margin of 1,09,137 against her nearest rival, the BJP's L Chandrashekar who had pulled out of the contest but officially still remains the party candidate.

Chandrashekhar had joined the BJP ahead of the polls and then returned to the Congress weeks later, leaving the saffron party red-faced and the field open for a walkover for Anitha Kumaraswamy.

Ramanagara seat fell vacant after Kumaraswamy preferred to retain Chennapatna, the other constituency from where he had won.

With Tuesday's victory, the Congress-JD(S) alliance's tally will go up to 120 seats in the 224 member assembly where the BJP has 104 MLAs.

Mandya is a stronghold of the Vokkaliga community to which JD(S) supremo and former prime minister H D Deve Gowda belongs.

Elated over the performance of the ruling alliance candidates, jubilant Congress workers distributed sweets and broke coconuts at various places.

"Look at the margins...It's clear that people are fed up with the BJP. This anti-people, anti-farmer, anti-women government at the Centre must go.

Karnataka is the only south Indian state where the BJP has been in power.

The by-elections for three Lok Sabha seats were necessitated after Yeddyurappa and Sriramulu of the BJP and C S Puttaraju of the JD(S) vacated Shivamogga, Ballari and Mandya following their election to the assembly in May.

Bypolls to Jamkhandi seat was necessitated following the death of sitting Congress MLA Siddu Nyamagouda, while Ramanagara fellvacant after Kumaraswamy gave it up.