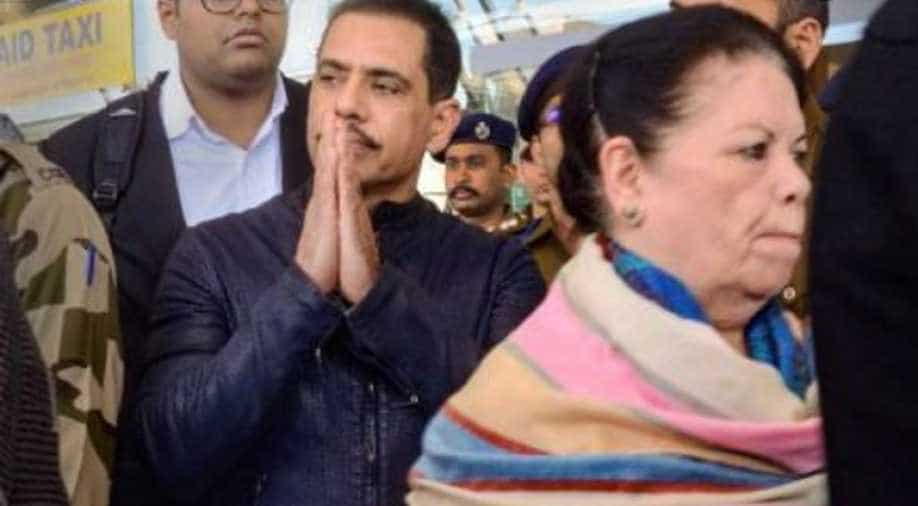 The mother-son duo arrived in Jaipur on Monday to be quizzed on an alleged land scam in Bikaner, the state’s border town.

UPA chairperson Sonia Gandhi's son-in-law Robert Vadra and his mother, Maureen Vadra, appeared before the Enforcement Directorate in Jaipur on Tuesday in connection with a money laundering case amidst heightened security.

The mother-son duo arrived in Jaipur on Monday to be quizzed on an alleged land scam in Bikaner, the state’s border town.

Priyanka dropped off the mother-son duo at the ED office and left soon after.

On January 22, the Rajasthan High Court’s Jodhpur bench had directed Vadra, Maureen, and his partners in Skyline Hospitality to appear before the ED on February 12 to respond to the allegations of money laundering levelled against his firm.

In November last year, the ED had for the third time issued summons to Vadra and his mother - a partner in the firm- for questioning but none of them appeared. Instead, they moved the High Court seeking a ‘no coercive action’ order and stay of their arrest.

A money laundering case was registered by the ED in September 2015, claiming that Skylight Hospitality had acquired land in Kolayat village of Bikaner, which was meant for the rehabilitation of the poor villagers.

It was alleged that Vadra bought 69.55 hectares of land at a cheaper rate and then sold the land to Allegheny Finlease for Rs 5.15 crore through illegal transactions.

It is worth mentioning that in Bikaner land scam fraudsters in collusion with the state government officials got allotted land in the name of fictitious individuals, though the land was actually meant for the people who were displaced due to the creation of Mahajan Field Firing range.

The fraudsters created forged allotment letters purportedly issued by the Colonisation Department of the state government and 1,422 ‘bighas’ of land was recorded in revenue record in the name of fictitious allottees without due verification of the allotment letters from the concerned department.