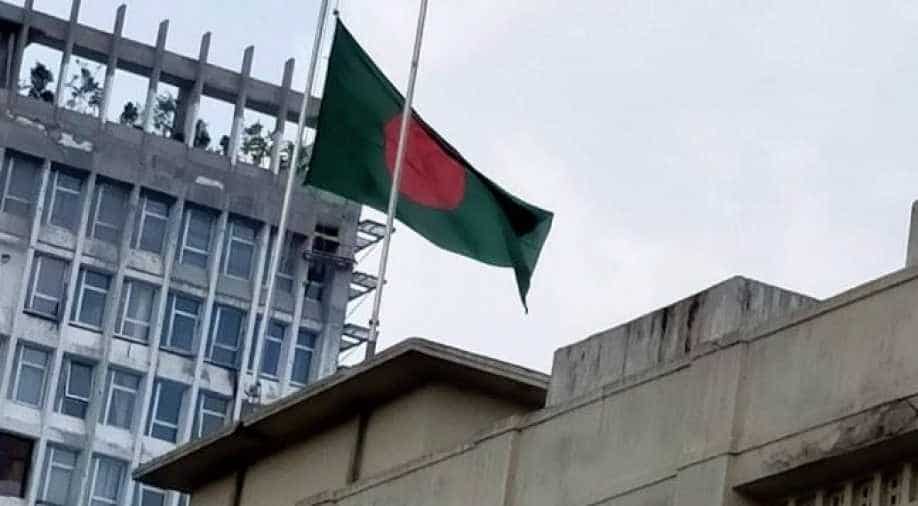 Bangladeshi flag at half-mast at the Secretariat building in Dhaka to pay homage to former President Pranab Mukherjee. Secretariat is the administrative headquarters of Bangladeshi govt. Photograph:( WION )

Hours after Pranab Mukherjee's death on August 31, Bangladeshi PM had wrote to PM Narendra Modi offering her condolences and called Mukherjee a "true friend of Bangladesh".

Bangladesh's national flew at half mast on Wednesday as the country paid homage to former Indian President Pranab Mukherjee who departed on August 31, 2020. Bangladesh is marking one day of national mourning for Mukherjee who was a well-known figure in the country and had close ties with Bangladeshi Prime Minister Sheikh Hasina.

Hours after Pranab Mukherjee's death on August 31, Bangladeshi PM had wrote to PM Narendra Modi offering her condolences and called Mukherjee a "true friend of Bangladesh".

"He has always been highly revered and loved by the people of Bangladesh. His steadfast support and contribution in strengthening the relations between the 2 countries" especially during his tenure as the "13th President of India, will always be remembered with the deepest respect," She said.

In 2013, the Bangladeshi government conferred 'Bangladesh Muktijuddho Sommanona' (Liberation war honor) on Pranab Mukherjee for his contribution to Bangladesh liberation war of 1971.

The Bangladesh flag is flying at half-mast at the Bangladesh mission in New Delhi as well. An event will be organized later in the day to pay respects to Pranab Mukherjee.

India has already announced seven days of state mourning in honour of the former president and during the period of mourning the national flag will fly at half-mast on all buildings throughout the country.