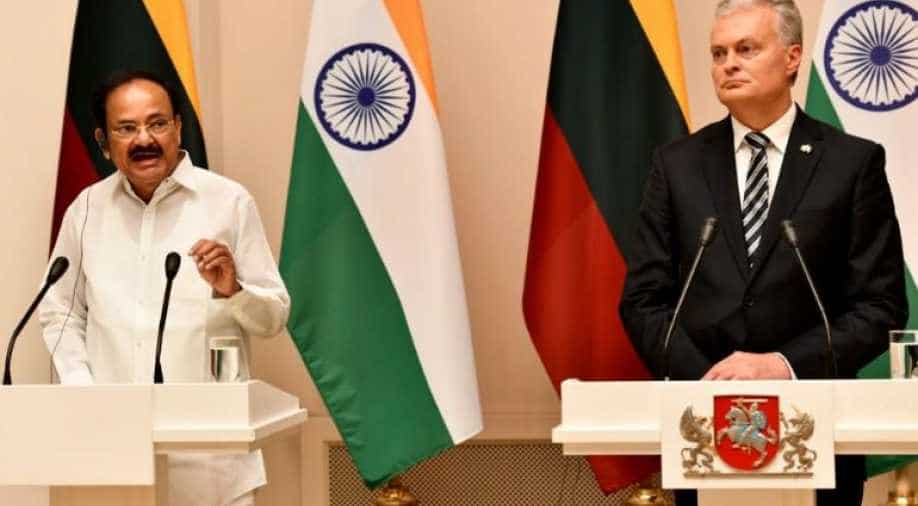 Urging Lithuanian businesses to take advantage of economic opportunities in India, the Vice President said, 'We would also be happy to have Lithuania as our energy transformation partner as India plans to generate 100 GW from solar energy by 2022.'

Vice President M Venkaiah Naidu in Lithuania has stressed the need for collective action from all countries to tackle terrorism and also to isolate those nations who aid and abet terror.

"Terrorism is one of the major challenges confronting the world today. All the nations must intensify their collective efforts and strive to eliminate the menace of terrorism and also isolate nations which aid and abet terrorism," he said in a joint presser along with Lithuanian President Gitanas Nauseda on Saturday. India has extended e-Visa facility to Lithuanian nationals for ease of mobility, Naidu said.

Urging Lithuanian businesses to take advantage of economic opportunities in India, the Vice President said, "We would also be happy to have Lithuania as our energy transformation partner as India plans to generate 100 GW from solar energy by 2022."

Both countries on Saturday signed 3 MoUs to boost cultural, agricultural and legal cooperation. The signing of the agreements was witnessed by Naidu and Nauseda.

VP @MVenkaiahNaidu and President Gitanas Nauseda of #Lithuania witnessed the signing of three MoUs to strengthen agricultural, cultural and legal cooperation between the two countries. pic.twitter.com/PhPUAhWACb

Naidu is on a three-nation visit to the Balkan nations of Lithuania, Latvia and Estonia. He arrived in Lithuania on Saturday on the first leg of his visit.

The Vice President was received by the country's foreign minister Linas Linkevicius, India's Ambassador to Lithuania Tsewang Namgyal and others.

Naidu proceeded to the Presidential Palace where he was received by Nauseda. Both leaders held one-on-one talks and delegation-level negotiations to review the bilateral ties.

During the talks, the two sides agreed the need to make the UN Security Council more representative to reflect the realities of today and address current global challenges.

Lithuania has also backed India to have permanent membership in an expanded and reformed UN Security Council.

The Vice President received a copy of the book 'History of Lithuania' in Sanskrit.

"Happy to have received a copy of the book 'History of #Lithuania' in #Sanskrit. Lithuanian is the oldest Indo-European language & it has strong links with Sanskrit. I hope that many more books on Lithuanian history, culture and society get published in Indian languages," read a tweet from the Vice President of India.