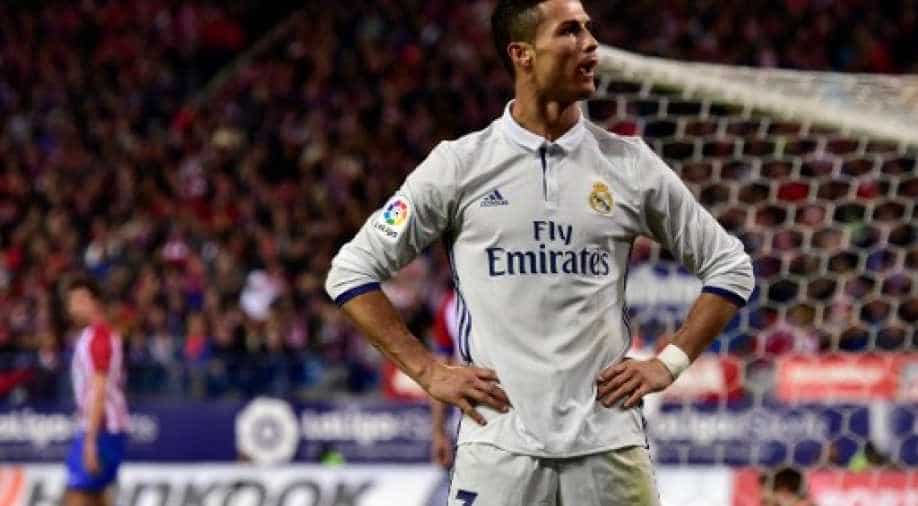 Cristiano Ronaldo's hat-trick delivered Real Madrid's first success over Atletico Madrid in La Liga for three years with a 3-0 win in the last meeting between the sides at Atletico's Vicente Calderon.

Real now lead second-placed Barcelona by four points after the Catalans paid a heavy price for the absence of Lionel Messi and Luis Suarez in a 0-0 draw with nine-man Malaga earlier on Saturday.

A third league defeat in four games leaves Atletico's title ambitions in tatters in their final season at the Calderon. Diego Simeone's men are now nine points adrift of Real down in fifth.

Ronaldo struck the decisive spot-kick as Real edged Atletico on penalties in the Champions League final in May and was the match winner once more, albeit with a slight hint of fortune.

The Portuguese's opener took a wicked deflection on its way past the excellent Jan Oblak.

Ronaldo doubled Real's lead from the penalty spot 19 minutes from time before a brilliant Gareth Bale cross teed him up for the simplest of finishes to complete his hat-trick.

Only an incredible save by Oblak prevented Ronaldo opening the scoring with a towering header on 12 minutes that the Slovenian somehow clawed away low to his left.

Oblak made another smart save to deny Luka Modric moments later, but he was helpless for the opener as Ronaldo's free-kick was deflected behind him via the Atletico wall.

It took Atletico until the start of the second period to get to grips with the European champions, but came out a different side after the break.

Yannick Carrasco curled inches wide from the edge of the area before Antoine Griezmann blasted a shot across goal with no Atletico player waiting to knock to the ball into an unguarded net.

However, any hopes of an Atletico fightback were punctured when Stefan Savic upended Ronaldo inside the area and the three-time World Player of the Year dispatched the resulting spot-kick.

And with Atletico stretched at the back, a brilliant run and low cross from Bale on the counter-attack teed up Ronaldo to prod home at the far post.