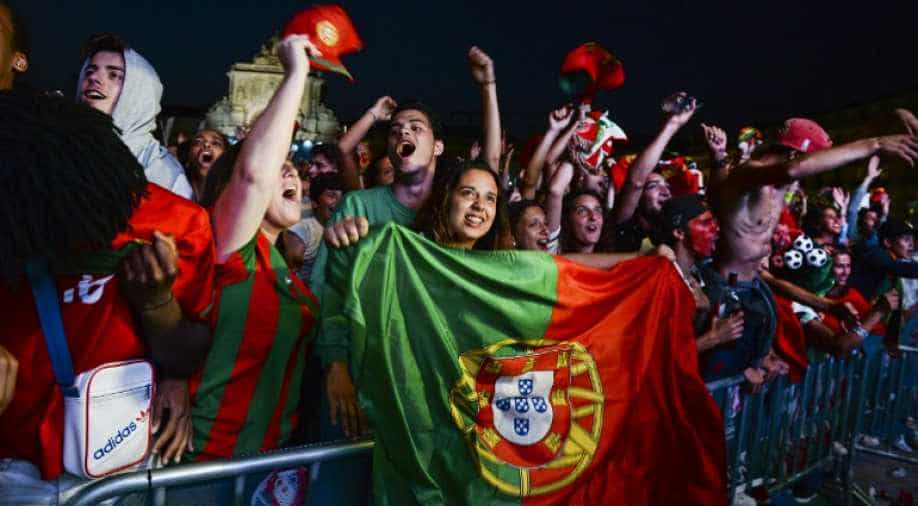 The Portuguese superstar, who has had to soak up a lot of criticism for a lacklustre tournament by his high standards, majestically powered in a 50th-minute header to put his side in front. Photograph:( Getty )

Follow Us
Cristiano Ronaldo scored one goal and inadvertently set up the other as Portugal ground out a 2-0 win over Wales on Wednesday to march into the Euro 2016 final.

The Portuguese superstar, who has had to soak up a lot of criticism for a lacklustre tournament by his high standards, majestically powered in a 50th-minute header to put his side in front.

The goal, his third in the tournament, equalled Michel Platini's record of nine in European Championship finals.

Ronaldo also saw his shot turned in by Nani for a second goal in the 53rd minute, ending Wales' remarkable run at their first major finals since 1958.

Portugal, who had not won a single game in the tournament over 90 minutes, next meet hosts France or Germany who play their semi-final on Thursday.

"I hope that after the final we will be smiling and that it will be tears of joy in the end," said Ronaldo who wept after his team lost to surprise packages Greece in the 2004 final.

"I have always said my dream was to win a trophy with Portugal. We are closer to doing it and I believe we will win," he told reporters after coming out on top in his battle with Real Madrid team mate Gareth Bale.

Wales kept their opponents quiet in the first half but could not recover the two-goal deficit, ending a scintillating run that has captivated millions back home and turned their players into heroes.

The Welsh, with midfielder Aaron Ramsey suspended and replaced by Leicester City's Premier League winner Andy King, had an early spell of possession but a tight Portugal defence kept them at bay.

Portugal, bidding to reach their first Euro final since losing on home soil 12 years ago, had their first chance after a quarter of an hour following a low drive by Joao Mario.

Wales responded as Joe Ledley found Bale with a low corner and the forward fired over the bar.

The Welsh, playing their first major tournament semi-final, did not suffer from stage fright with their back line, supported by midfielders Ledley and Joe Allen, disciplined and compact.

In a cagey first half Portugal struggled to find Ronaldo, opting for long crosses into the box that were easy pickings for central defender James Collins.

Portugal injected some urgency after the break, pressing high up the field.

It paid off instantly with a corner in the 50th minute that Raphael Guerreiro floated in towards the far post where Ronaldo climbed high above two defenders to score.

Portugal doubled the lead when Nani slid in to connect with Ronaldo's mishit shot, netting his own third goal of Euro 2016.

Wales were lucky not to concede more goals late in the game as Portugal, now unbeaten in 13 competitive matches, continued to dream of a maiden top-notch trophy.

"We are massively disappointed obviously but we have given everything on and off the pitch," said Wales talisman Bale. "We tried our hardest to get back in the game, they shut up shop well but we have no regrets. We are very proud. We will pick ourselves up. Nobody expected us to get this far but we did."