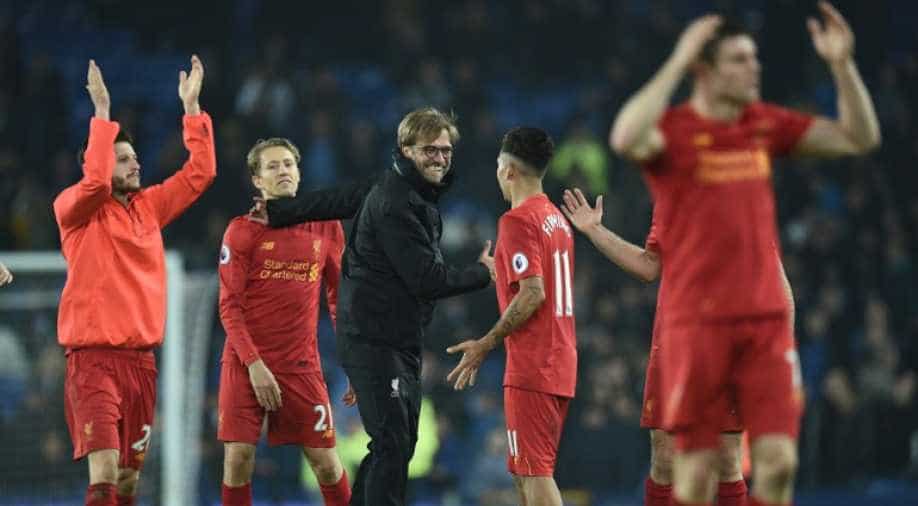 Liverpool have only lost twice all season but are currently missing the influential Philippe Coutinho as they prepare for the first of two home games before the end of the year. Photograph:( AFP )

Liverpool manager Jurgen Klopp believes a little more luck on the injury front is all that is separating his team from Premier League leaders Chelsea as the Reds prepare to face Stoke City on Tuesday.

The Anfield club spent Christmas in second place in the Premier League table but trailed Chelsea by six points as they struggle to stay in touch with Antonio Conte's in-form side.

Liverpool have only lost twice all season but are currently missing the influential Philippe Coutinho as they prepare for the first of two home games before the end of the year.

"I am pretty sure that until now Chelsea are maybe the team that have had the most luck with injuries. We lost Phil and Daniel (Sturridge) and Danny Ings in difficult moments when you really could use them," Klopp told Sky Sports News.

"If it's Hazard and Costa at Chelsea, is it the same afterwards?"

Coutinho is not likely to return before the new year due to an ankle injury while defender Joel Matip is also struggling as the Reds look forward to welcoming Stoke and then Pep Guardiola's Manchester City to Merseyside over the next week.

"We cannot rush the situation and we don't want to rush it. We have to accept the more or less bigger steps in his improvement with this serious injury," Klopp said of Coutinho.

"Whenever he is back, the season is long enough that he can help us. We cannot rush it just because there are a few games now. That cannot have an influence on our decisions."

Klopp, who had his squad in for training on Christmas Day despite the extra 24 hours to prepare for the visit of Stoke, could stick with an unchanged starting line-up as Liverpool look to build on successive wins at Middlesbrough and Everton.

Simon Mignolet should keep his place in goal after recording clean sheets in these matches as Liverpool look to maintain their impressive record at home.

They are unbeaten in nine home games in all competitions this season and haven't lost at Anfield since Stoke won 1-0 there in the EFL Cup semi-final second leg on January 26 -- Liverpool eventually won that tie on penalties.

'Be positive'
Mid-table Stoke head to Merseyside having failed to win in three matches, including a 2-2 draw at home to Leicester City in their last outing when they squandered a two-goal lead.

Stoke could not have asked for a tougher festive period, with this game being followed by a trip to Chelsea on New Year's Eve but Hughes is backing his team to spring a surprise.

"We are under no illusions as to how good they both are and how difficult the matches will be for us, but we have to go into the games with real belief," said Hughes.

"Not many people are thinking we have a chance of gaining positive results but that certainly isn't the case within our camp.

The game will see Wales midfielder Joe Allen return to Anfield for the first time since moving to Stoke in a £13 million ($15.9m, 15.2m euros) deal in the close season.

"I don't think he's going to be turning up there with the intention, 'I'll show everybody they were wrong -- I feel bitter about my time there and how I was allowed to leave'", said Hughes, who is without the banned Marko Arnautovic.

"Clubs move players on. That's football. I think players always want to do well when they go back to a club, but he has nothing to prove."