Venezuela nurses turn to side jobs to survive economic crisis 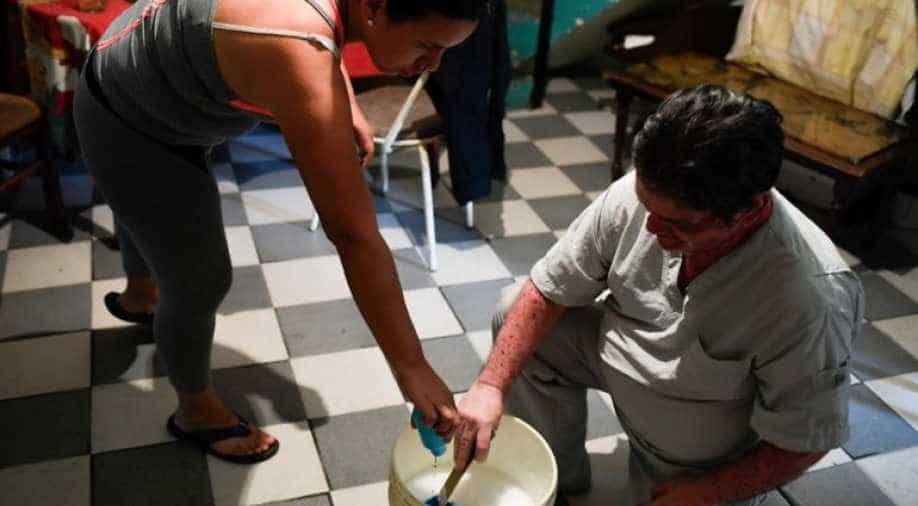 Venezuelan nurse Francis Guillen (L), who works at a state hospital, and her father make hair gel to sell at her house in Caracas. Photograph:( AFP )

Being a nurse in Venezuela is an almost impossible job these days: the country has seen an exodus of the profession, leaving those who remain short of colleagues and contending with problems such as major shortages of medical supplies and devastating electricity blackouts.

Edgar Fernandez keeps a mariachi suit in a rusty wardrobe at the public hospital in Caracas where he works as a nurse, donning it for performances that augment his meagre salary.

Given that he earns just $10 a month, the money from these shows has been his salvation in crisis-wracked Venezuela, where nurses have been forced to reinvent themselves as home entrepreneurs, security guards or builders just to survive.

Being a nurse in Venezuela is an almost impossible job these days: the country has seen an exodus of the profession, leaving those who remain short of colleagues and contending with problems such as major shortages of medical supplies and devastating electricity blackouts.

"A nurse's salary is worth nothing," Fernandez told AFP, saying the money he earns from a 12-hour shift "can't buy anything."

When a show clashes with his work shift, he has to pay a colleague to cover for him, meaning that his earnings -- which are not always money -- shrink.

"Sometimes they pay me... with flour, lentils... I prefer this to going home empty-handed," said the 40-year-old, who practically lives in the Perez Carreno hospital, sleeping on a dirty mattress since he cannot afford rent.

Decked out in his silver-lined outfit, Fernandez sings in bars and homes, and is even sometimes hired by former patients.

He saved up to record an album, which he peddles to radio stations. His hope is to one day find fame.

Francis Guillen makes hairspray that she sells in Caracas's busy Catia market as she battles, like most Venezuelans, to make ends meet in a country whose inflation will reach a staggering one million per cent this year, according to the International Monetary Fund.

"If I didn't have another job, I don't know what would have become of me," said the 30-year-old nurse, who in a single day selling hairspray can earn the equivalent of her monthly salary.

Sometimes her father, also a nurse, helps her mix the chemicals in a bucket in her front room.

Her husband, who gave up his job as a fireman, also helps out with the business.

Guillen is tempted to resign from her job, but says the desire "to serve" her compatriots is keeping her from joining the 3.3 million people the United Nations estimates have left Venezuela since the start of 2016.

But since June 2018, 15,000 members of her profession -- or around 40 per cent -- quit and many of those emigrated, according to Ana Rosario Contreras, president of the Nurses College of Caracas, which has called for salaries to be paid in dollars to halt the exodus.

'In love' with nursing

By day, Carlos Ruiz works as a security guard for a metallurgy company and also does odd jobs.

The 42-year-old says he does "what's needed to survive."

But despite saving up as much as he can, he hasn't been able to buy a new nurse uniform for the last four years: he needs 10 months of salary for that.

He also has to deal with the scarcity of hospital supplies -- up to 80 per cent in some sectors, according to NGOs -- which President Nicolas Maduro blames on an economic war waged by the United States at the invitation of the opposition.

"There's no lack of those who accuse us of stealing medicines," according to Ruiz, who said he is "in love" with a job that allowed him to be present at the births of his four children.

In some hospitals, a single nurse has to look after up to four patients, something those in the profession decry as "labour persecution."

Working to save lives

Repeated major electricity blackouts have also taken their toll on the medical sector, knocking out power to hospitals -- many of which do not have working generators -- with potentially deadly consequences for patients.

Camilo Torres sells pastries and ice cream in his home in the southern state of Bolivar and goes to work at the local hospital on foot because of the lack of public transport. It takes him two hours.

Facebook photos attest to the toll his struggles have taken on his body: three years ago, he weighed 120 kilograms (264 pounds), but now weighs just 65 (143 pounds).

"I'm skinny and that's due to hunger," said the father of three, who wears broken shoes.

A neighbour helped him sew them up because a new pair costs three times his salary.

He can't even afford socks and his once white uniform looks yellow -- for Torres, detergent is a luxury.

But he won't give up.

"My job is to save lives. If there's no one in the hospital then I'm sure that if today 10 people die, tomorrow it will be 50 and that pain would never leave me," he said.

Donald Trump once again speaks in favour of reopening schools