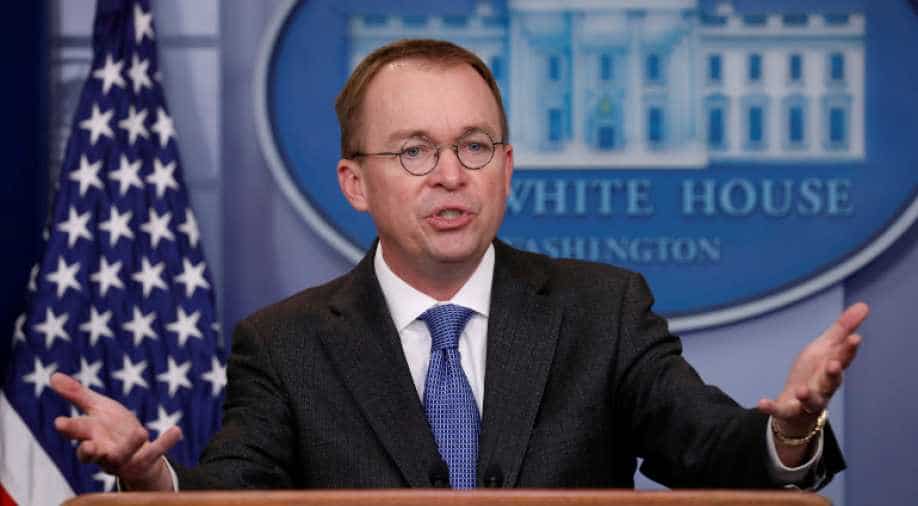 File photo: Mick Mulvaney during a press briefing at the White House in Washington. Photograph:( Reuters )

'I don't think things are going to move very quickly here for the next few days,' because of the Christmas holiday, added Mulvaney.

US President Donald Trump's budget director and chief of staff on Sunday said the partial US government shutdown could continue to January 3, when the new Congress convenes and Democrats take over the House of Representatives.

"It's very possible this shutdown will go beyond the 28th and into the new Congress," Mick Mulvaney said on Fox News Sunday.

"I don't think things are going to move very quickly here for the next few days" because of the Christmas holiday, added Mulvaney, who serves as director of the Office of Management and Budget and was named acting White House chief of staff 10 days ago.

The US Senate adjourned on Saturday unable to break an impasse over Trump's demand for more funds for a wall on the border with Mexico that Democrats are unwilling to accept.

Mulvaney said the White House made a "counteroffer" to Democrats on funding for border security that falls between the Democratic offer of $1.3 billion and Trump's demand for $5 billion.

As part of those talks on Saturday, Vice President Mike Pence offered to drop the demand for $5 billion for a border wall, substituting instead $2.1 billion, ABC News reported citing unnamed sources.

Mulvaney sought to shift blame for the partial shutdown to Nancy Pelosi, the Democratic nominee for speaker of the US House of Representatives, saying she might hold up negotiations to ensure she secures the position.

"I think she's in that unfortunate position of being beholden to her left wing to where she cannot be seen as agreeing with the president on anything until after she is speaker," Mulvaney said. "If that's the case, again, there's a chance we go into the next Congress."

Financing for about a quarter of federal government programs - including the departments of Homeland Security, Justice and Agriculture - expired at midnight on Friday and will not be renewed until a deal is done.

Federal parks were to close and more than 400,000 federal "essential" employees in those agencies will work without pay until the dispute is resolved. Another 380,000 will be "furloughed", meaning they are put on temporary leave.

Building a wall to keep migrants from entering the United States illegally was a central plank of Trump's presidential campaign, but Democrats are vehemently opposed and have rejected his funding request.

Trump reiterated his push for border security on Sunday, saying on Twitter that "the only way" to stop drugs, gangs, and human trafficking at the border was with a wall or barrier.

"Drones and all of the rest are wonderful and lots of fun, but it is only a good old fashioned Wall that works!," the president said in the tweet.

Earlier in the week, leaders in both the Senate and House of Representatives thought they had reached a deal that Trump would sign that contained less money for border security, only to watch the president, under pressure from conservatives, re-assert his demand for $5 billion at the last minute.

Senator David Perdue, a Republican from Georgia on the Senate Banking Committee, said on Fox News' "Sunday Morning Futures" that he thought a deal this week was possible.

"I spoke to the President last night, he wants that," Purdue said, adding "I'm hopeful that cooler heads will prevail and we'll get to some number between $1.6 (billion) and $5 billion on that."