Syria to join Paris climate pact, isolating the US 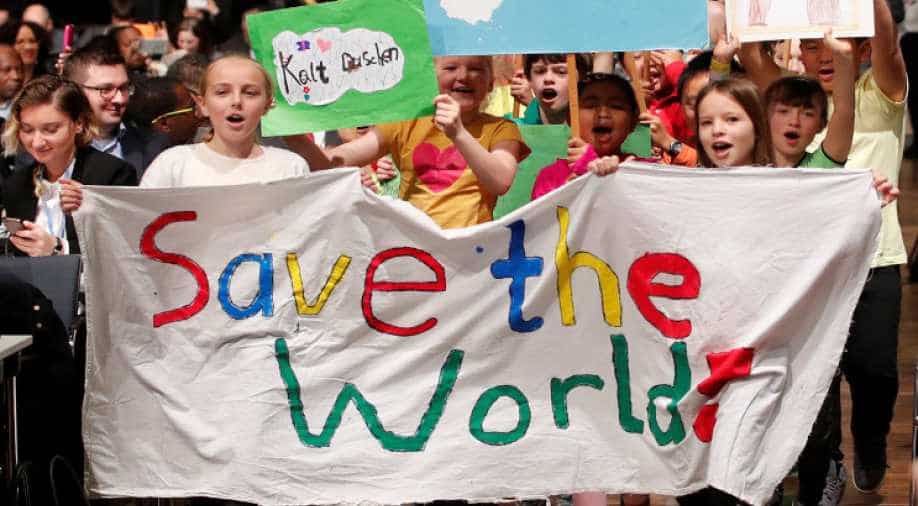 Children during climate march prior to the opening session of the COP23 UN Climate Change Conference 2017, hosted by Fiji but held in Bonn Photograph:( Reuters )

The United States mocked Syria's arrival in the climate change agreement Tuesday, side-stepping the charge that it has isolated itself by being the world's sole hold-out

Syria told the UN climate talks in Bonn on Tuesday that it would join the Paris Agreement, leaving the United States as the only nation in the world opting to stay outside the landmark treaty.

"We are going to join the Paris Agreement," the Syrian delegate, speaking in Arabic, said during a plenary session at the 196-nation talks, according to Safa Al Jayoussi of the IndyAct NGO, who was monitoring the session.

The United States ratified the 2015 pact but US President Donald Trump announced earlier this year that he would pull out, saying the pact did not serve US interests.

"It is our understanding that the government of Syria announced today their intent to join the Paris Agreement," Nick Nuttall, the spokesman for the UN climate body, told AFP.

Nuttall identified the Syrian delegate as Wadah Katmawi, the deputy minister of the ministry of local administration and environment.

Syria must submit their "instruments of ratification" at the UN headquarters in New York before their adherence becomes official, he added.

According to the Syrian parliament website, a bill was passed on October 22 to ratify the Paris accord, "in accordance with the Syrian Constitution which stipulates the protection of the environment".

Other parties at the 12-day negotiations, tasked with elaborating and implementing the agreement, welcomed the news.

"They were the last party to the UN Convention to sign the Paris Agreement," he said, referring to 1992 UN Framework Convention on Climate Change (UNFCCC), the bedrock treaty for UN climate talks.

"That leaves only the one who announced their withdrawal," he added, in an oblique reference to the United States.

War-torn Syria would be the 197th country to sign on to the climate pact, which vows to hold global warming to "well below" two degrees Celsius (3.6 degrees Fahrenheit).

The United States mocked Syria's arrival in the climate change agreement Tuesday, side-stepping the charge that it has isolated itself by being the world's sole hold-out.

"I find it ironic that the government of Syria, OK, would say that it wants to be involved and that it cares so much about climate and things like CO2 gas," she told reporters.

"If the government of Syria cared so much about what was put in the air, then it wouldn't be gassing its own people," she said, referring to the Damascus regime's brutal civil war tactics.

Nauert said that the department's undersecretary for political affairs, Tom Shannon, would lead a US delegation to the Bonn talks next week but that Trump's decision would stand.

"We intend to withdraw from the Paris Agreement as soon as we're eligible to do so," she said.

Openly isolated on the climate issue at G-7 and G-20 meetings earlier this year, the United States said it intended to withdraw "unless the president can identify terms that are more favourable to American businesses, workers, and taxpayers."

"This means Trump is in splendid isolation -- no one wants to be in his company," said Alden Meyer, a veteran climate analyst at the Washington-based Union of Concerned Scientists.

"With Syria on board, now the entire world is resolutely committed to advancing climate action -– all save one country," said Paula Caballero, director for climate change at the World Resources Institute.

"This should make the Trump administration pause and reflect on their ill-advised announcement about withdrawing from the Paris Agreement."

Signed in the French capital in December 2015, the treaty entered into force on November 4, 2016.

According to the terms, no country can formally submit their intent to withdraw until three years after the date of entry into force.

It will then take one year to fully withdraw, meaning the earliest the United States could officially withdraw is the day after the 2020 election.

"When even Syria -- with all its problems -- can see the sense of a global climate agreement, it really shows how ideologically wedded to climate denialism the US Republican Party has become," said Mohamed Adow, International Climate Lead for Christian Aid.