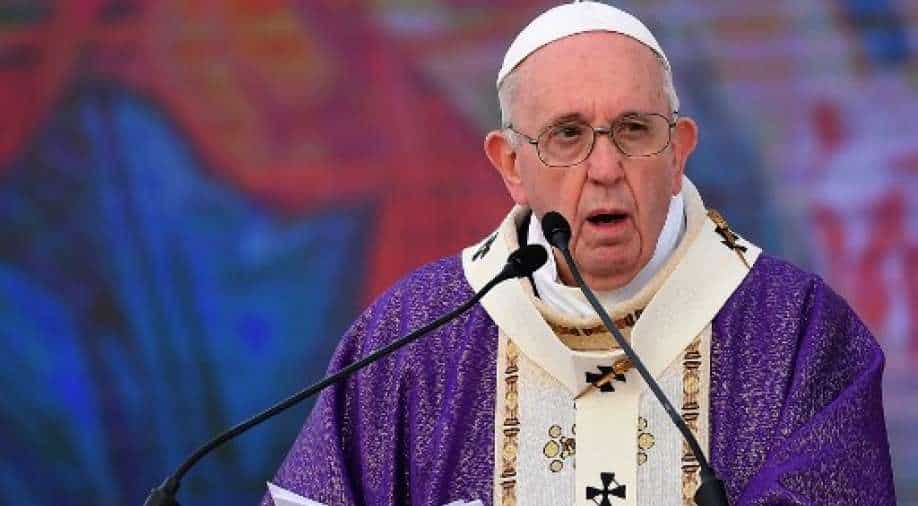 While mask and social distancing regulations were respected at some indoor papal gatherings, where participation was limited, thousands of mostly young people attended a Mass at Erbil stadium on Sunday night and most were not abiding by the rules

Pope Francis said on Monday that he decided to visit Iraq despite a rise in COVID-19 cases after much prayer and contemplation and suggested God would protect those who came to see him from the virus.

Speaking to reporters on the plane returning from his trip, Francis also said he realised that some conservative Catholics would see his meeting with Grand Ayatollah Ali al-Sistani, as "one step from heresy" but that sometimes it was necessary to take a risk in inter-religious relations.

The 84-year-old Francis, speaking while standing for about 50 minutes, said the trip, his first foreign visit in 16 months, had left him much more fatigued than previous ones.

But he said he felt "reborn" after "feeling like I was imprisoned" by coronavirus restrictions. He added that "84 years do not come without baggage" and that he could not say if he would make fewer trips in the future.

While mask and social distancing regulations were respected at some indoor papal gatherings, where participation was limited, thousands of mostly young people attended a Mass at Erbil stadium on Sunday night and most were not abiding by the rules.

The pope has often urged people to respect the guidelines of local authorities and the Vatican said before the trip they were confident that Iraqi officials would be able to make people follow the rules.

A reporter asked if he worried that people who came to see him could get sick and possibly even die.

"Trips cook slowly overtime in my conscience. And this (the virus threat) is one of the things that most made me think 'perhaps, perhaps'," Francis said.

"I thought about it a lot, I prayed a lot over this. And in the end, I took the decision freely. It came from within and I said 'the one who allows me to decide this way will look after the people'," he said, apparently referring to God.

"That is how I made the decision, after prayer and after awareness of the risks," he said.

One of the most significant moments of the trip was the pope's meeting on Saturday in the holy city of Najaf with the 90-year-old Sistani, one of the most influential figures in Shi'ite Islam, both within Iraq and beyond.

"Sometimes you just have to take a risk," he said of the meeting.

"There are some critics who say that the pope is not courageous, but reckless, that he is doing things against Catholic doctrine that are one step away from heresy," he said.

Throughout his papacy, conservatives have criticised his opening to the Muslim world, including the signing in 2019 of a joint document on inter-religious fraternity during a visit to Abu Dhabi. That visit was the first by a pope to the Arabian peninsula, home of Islam's most sacred sites.

"These are risks but these decision are always taken in prayer," he said, adding that he found Sistani to be "a great sage, a man of God", and that the meeting "did my soul good".

On Sunday morning in Mosul, Francis heard Muslim and Christian residents in the ruined city tell of their lives under Islamic State, which occupied it from 2014 to 2017.

He told reporters the visit to Mosul, where he sat surrounded by the wreckage of buildings, dangling concrete staircases, and cratered ancient churches, had left him shocked by the "unbelievable cruelty" that took place.

Francis said he badly wanted to make a visit to Lebanon as soon as possible to show solidarity with the people of all religions suffering there.