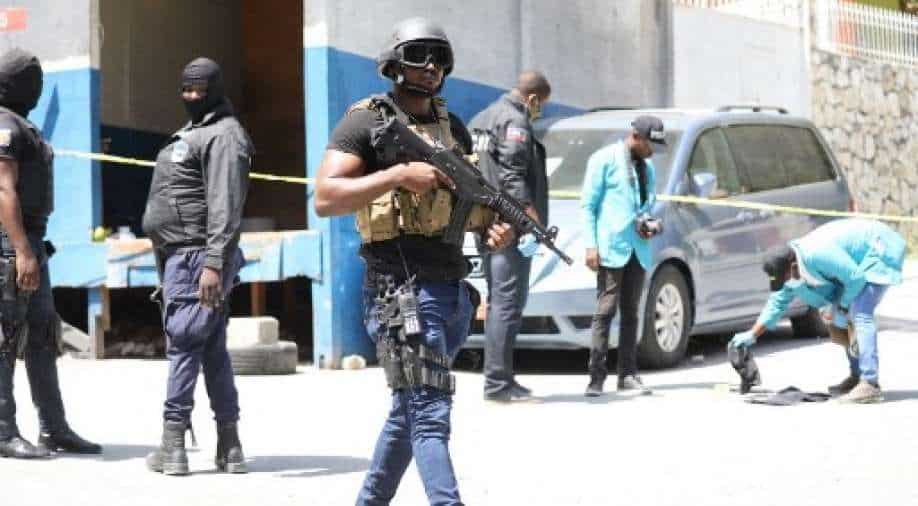 Members of the Haitian police and forensics look for evidence outside of the presidential residence in Port-au-Prince Photograph:( AFP )

After President Jovenel Moise's assassination, Dominican Republic closed its border with Haiti with the United Nations Security Council set to hold a special meeting on the situation.

The police had claimed earlier that they had apprehended two suspected members who had reportedly killed Moise.

Moise, 53, was shot dead after assassins stormed his house although Haiti's police and army quickly moved to tackle them.

"I'm also aware that a larger group of possible perpetrators have taken refuge in two buildings in the city and they are now surrounded by the police," the UN envoy to Haiti Helen La Lime said.

Amid the clash, the security forces reportedly killed four suspects and arrested two others and freed two officers who were taken hostage.

After the incident, Dominican Republic closed its border with Haiti with the United Nations Security Council set to hold a special meeting on the situation in Haiti today.

Haitian police have been combing the area for more gunmen after killing or capturing at least six "mercenaries", reports say.

Security officials have been roaming the country's capital Port-au-Prince with shops and business establishment shut amid a tense situation prevailing in the country.

Haiti's airport was closed as security forces engaged in a shootout with suspected assailants in Port-au-Prince.

The reason for the assination is still unclear and no information on who is responsible for the attack.

Moise was sworn in as president in February 2017, however, the term of his office became controversial as he looked to rule with the help of decrees as elections due in 2018 were delayed.