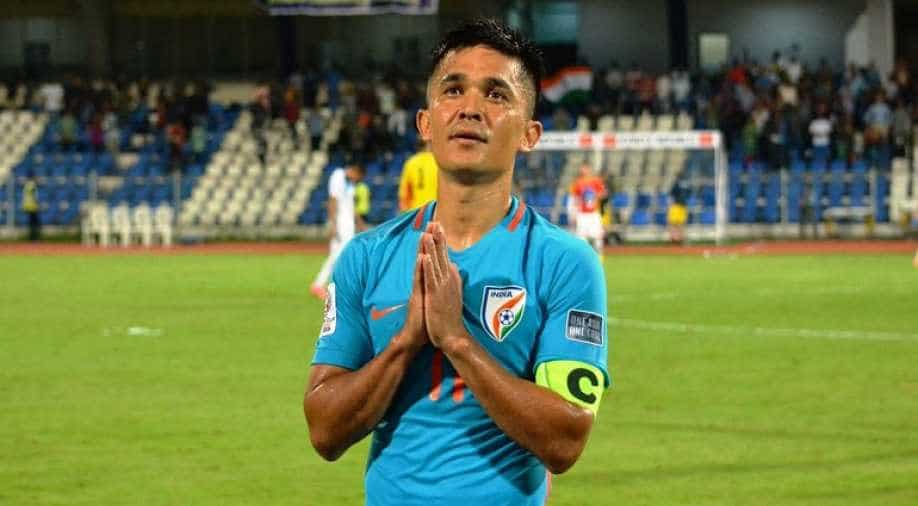 A file photo of Sunil Chhetri. Photograph:(Twitter)
Follow Us

Indian football team captain Sunil Chhetri made a plea to the fellow citizens to come support the Blue Tigers at the stadiums at every possible opportunity.

Chhetri, who is regarded as one of the greatest footballers that India has produced, urged the people who abuse to come to the ground and scream at them instead of taking out their anger on the social media platforms.

Chhetri made the plea a day after his hat-trick helped India defeat Chinese Taipei side 5-0 in front of a sparse crowd at Mumbai Football Arena.

"To all of you who are fans of big European clubs and support European clubs with so much passion and sometimes you guys think that the level is not the same, so why do you waste your time? Agreed, the level is not the same, not even close but with our desire and determination, we will try our best to make your time worth,” Chhetri said while thanking the fans who did show up.

“To all of you, who have lost hope or don’t have any hope in Indian football, we request you to come and watch us in the stadium,” the skipper added.

“I mean it’s not fun to criticise and abuse on internet. Come to the stadium, do it on our face, scream at us, shout at us, abuse us, who knows one day we might change you guys, you might start cheering for us. You guys have no idea how important you guys are and how important your support is.”

This is nothing but a small plea from me to you. Take out a little time and give me a listen. pic.twitter.com/fcOA3qPH8i

“I request you all to please come ...talk about the game, go back home, have discussions, make banners. Please get involved, this is an important time and juncture in Indian football and football in India needs you guys.”

India, who have improved their ranking to 97 in current Fifa chart, are in a good run of form of late.

They will next face Kenya on June 4, which will also be Chhetri’s 100th international match.