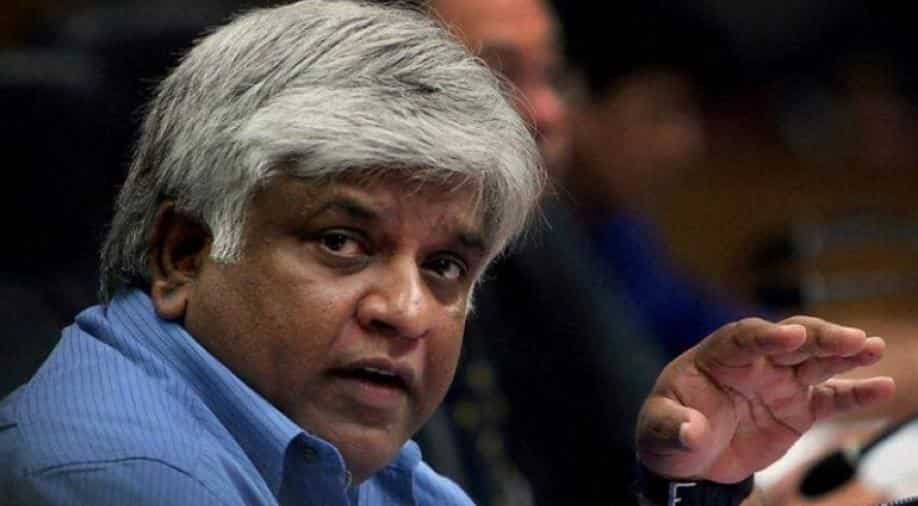 Earlier this month, Wickremesinghe announced his decision to resign from the UNP leadership following his party's defeat.

Arjuna Ranatunga, the captain of Sri Lanka's 1996 Cricket World Cup winning team, on Sunday joined the race to lead the Opposition United National Party (UNP) after former prime minister Ranil Wickremesinghe decided to resign from the party leadership after 26 years at the helm following its crushing defeat in the parliamentary elections.

UNP general secretary and Wickremesinghe's cousin Ruwan Wijewardena and former Speaker Karu Jayasuriya have also offered to lead and revive the party after its humiliating defeat in the parliamentary elections.

The UNP, the oldest party in the country, suffered its worst electoral defeat since it was formed in 1946 by failing to win a single seat from any of the 22 electoral districts in the August 5 election won by Prime Minister Mahinda Rajapaksa-led Sri Lanka People's Party (SLPP).

The party polled only 2 per cent of the total votes and failed to win a seat in the 225-member Parliament from any of the 22 electoral districts.

UNP chief and former prime minister Wickremesinghe also failed to become a member of parliament for the first time since 1977.

Earlier this month, Wickremesinghe announced his decision to resign from the UNP leadership following his party's defeat.

Wickremesinghe since 2001 resisted calls to resign as the party leader even in the face of repeated electoral defeats.

On Sunday, former Sri Lankan cricket team captain Ranatunga told reporters, "At the party working committee meeting held recently there were four names which came up as possible leaders. My name was also proposed. Given the opportunity, I would be happy to take over the party and revive it."

Ranatunga, 57, was among the top UNP members who lost their seats in their bid to enter parliament at the August 5 parliamentary elections.

"I am not a rich man or I am not the one to go after the rich businessmen to do politics, but I know I have the capability to go to people and do justice to the UNP members who are dejected right now," Ranatunga said.

His father Reggie was a minister in SLFP governments since 1994 and his brother Prasanna is the current Tourism Minister in the SLPP government led by the Rajapaksa brothers.

Ranatunga is a relative newcomer to the UNP having entered politics in 2001 from the SLFP.

In the 2015 reformist movement which toppled Mahinda Rajapaksa from the presidency after a decade, the former cricketer was a frontline campaigner.

On Saturday, Wickremesinghe's 45-year-old cousin Wijewardena said, "Following demands from many, I have decided to step in to lead UNP with the blessings of the party leader Wickremesinghe."

Wickremesinghe, 71, has been leading UNP since December 1994.

During his 26-year tenure, Wickremesinghe was blamed for repeated election losses.

He was accused of being aloof with the common man and being too West oriented in his policies.

His Samagi Jana Balawegaya (SJB) party won 54 seats in the election and emerged as the largest Opposition party, relegating the UNP to fifth position.

Wijewardena said though several party members have already staked a claim for UNP leadership, he is ready to take over the party leadership.

"I am confident that we can lead the UNP to victory by restructuring and strengthening the party," he said, adding that UNP's election defeat is an opportunity to identify the loopholes in the party and to restore confidence in party supporters.