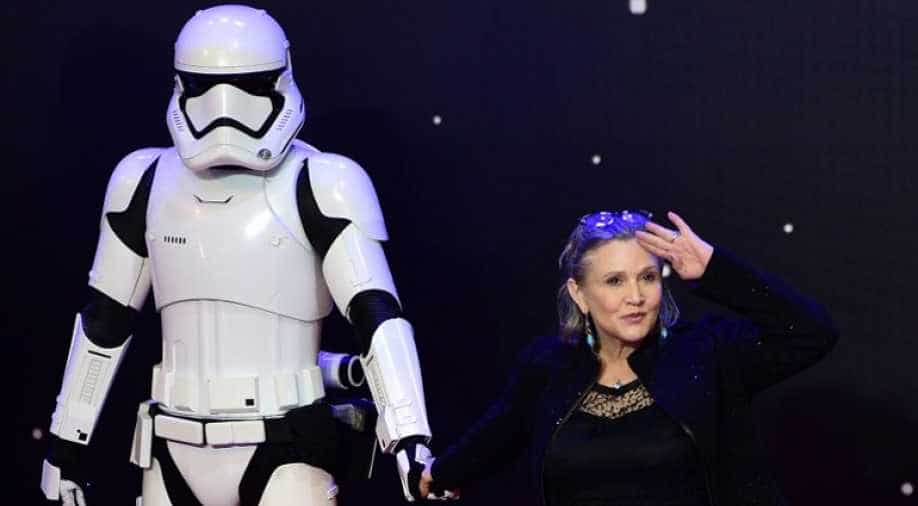 Fisher, 60, is in a Los Angeles hospital after suffering a massive heart attack near the end of a flight from London on Friday. Photograph:( AFP )

"Carrie is in a stable condition. If there is a change, we will share it," Reynolds said on Twitter.

"For all her fans & friends. I thank you for your prayers & good wishes."

Fisher, 60, is in a Los Angeles hospital after suffering a massive heart attack near the end of a flight from London on Friday.

Her brother, Todd Fisher, said late Friday that the actress was on a ventilator in an intensive care unit.

Reynolds's message suggested her daughter's condition might have improved a bit since then.

There was no update from the UCLA Medical Center.

Fisher was catapulted to worldwide stardom as the rebel warrior Princess Leia in the original "Star Wars" trilogy, which has been a cultural phenomenon since the release of the films from 1977 to 1983.

Mark Hamill, the actor who played her brother Luke Skywalker in the "Star Wars" movies, posted a tweet Sunday with the hashtag #CarrieChristmas, along with photos of him and Fisher. Text on one of the photos read: "Dear Santa -- all I want for X-mas is for the Force to be strong with this one."

Other "Star Wars" cast and crew have also sent their wishes for a speedy recovery.

The American actress is considered Hollywood royalty because of her family -- the daughter of movie star Reynolds, best-known for her role in "Singin' In The Rain," and singer Eddie Fisher.

A noted wit and endearingly honest commentator of her and Hollywood's foibles, Fisher has also talked and written frequently about her years of drug addiction and mental illness.

She has given various interviews over the years about her diagnosis of bipolar disorder and addiction to prescription drugs and cocaine, which she admitted using on the set of "The Empire Strikes Back" (1980).

Fisher's famous "Star Wars" character features as part of the storyline to spin-off "Rogue One," which is currently riding high in box offices around the globe, although the actress is understood not to have been involved in the production.