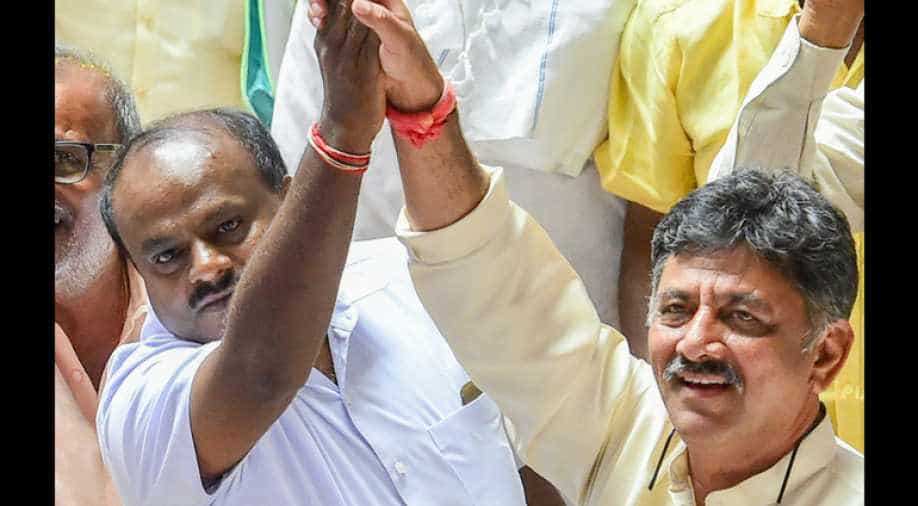 After the Congress-JDS alliance won four out of five seats that went to bypolls in Karnataka, Congress called the outcome a ‘teaser’ for 2019 Lok Sabha elections.

Buoyed by the victory in the bypolls, Karnataka Chief Minister H D Kumaraswamy and Congress state president Dinesh Gundu Rao Tuesday asserted that they would contest the 2019 Lok Sabha elections together against the BJP.

The two leaders gave credit for the electoral success to the policies of the Congress-JD(S) coalition, which bagged two Lok Sabha seats and two assembly segments in the by-elections held on Saturday.

Speaking to reporters, Kumaraswamy hailed the people for their support to the coalition government of the Janata Dal (Secular) and the Congress and said the two parties would contest the 2019 polls together in all the 28 constituencies in the state.

"We took many pro-people measures which are at the stage of implementation. The benefits have not reached them yet," the chief minister said.

However, people liked our policies, be it the crop loan waiver or financial aid to the street vendors, he said.

At a separate press conference, Rao said their sounding victory was an indication that the people of Karnataka had given their approval to the coalition government's policies.

"It has rejected the BJP, its divisive politics and dictatorial tendencies. We will contest the 2019 election together," he said.

Rao charged the Bharatiya Janata Party (BJP) with forgetting its duty as a responsible opposition.

The sweeping victory of the Congress - JD(S) alliance in the #KarnatakaBypolls is just a teaser for what is in store for the BJP next year. Congratulations to all the winners.#KarnatakaRejectsBJP

"The power-hungry BJP did not fulfil its responsibility of an opposition party. They set aside ethics and morality due to which they faced defeat at four places while its victory margin shrunk substantially in Shivamogga," Rao said.

Anitha Kumaraswamy, who won the election from the Ramanagara assembly constituency, gave credit for her victory to the tireless efforts of her chief minister husband Kumaraswamy, her father-in-law and former prime minister H D Deve Gowda and Congress leaders.

Tuesday happened to be Naraka Chaturdashi, a festival to mark the death of Narakasura, who was killed by Lord Krishna and his wife Satyabhama.
Siddaramaiah tweeted further, "My thanks to the people of Ballari. People have cursed the inhuman behaviour of Janardhana Reddy."

In the run-up to the polls, Janardhana Reddy had kicked up a storm, saying that God cursed Siddarmaiah with the loss of his son for him (Reddy) languishing in jail for four years, though nothing incriminating was found from him.

Reddy was criticised not only by the Congress leaders but also by the BJP, with its state chief B S Yeddyurappa even asking Reddy to apologise for his remarks.