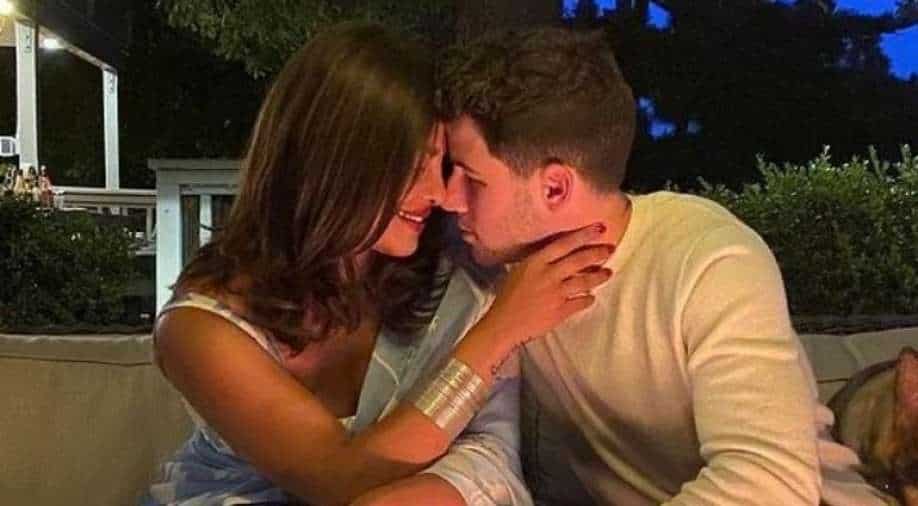 Nick Jonas dialed up the mush on Monday as he shared an adorable throwback photo with wife Priyanka Chopra.

Nick Jonas dialed up the mush on Monday as he shared an adorable throwback photo with wife Priyanka Chopra. Jonas, who is in America, stated he was missing his wife who is currently based in London and shooting for a film.

The singer-songwriter took to his Instagram handle and shared an adorable picture with his wife, in which they are seen embracing each other while sharing an intimate moment. Dedicating the heartwarming post to her, Nick wrote, "Her. That`s it. That`s the post. Missing my heart."

The snap features Priyanka clad in a beautiful pastel blue saree teamed up with silver bangles, giving major `desi-girl` vibes, while Nick is dressed in a casual white sweater and a black trouser. Not to miss, their pet dog Gino also got captured as he lies behind them.

The cosy picture of the couple made their fans drop a string of emoticons in awe of the much-in-love couple.

On a related note, Priyanka is currently shooting for her upcoming Amazon Prime Video show `Citadel` in London, while Nick is in Los Angeles.

Recently, the couple reunited in Los Angeles for the Billboard Music Awards 2021, which Nick hosted, and Priyanka assisted him due to his rib injury.

After the show, Priyanka dedicated a special `appreciation post` to Nick and said that she feels inspired by him.

"Husband appreciation post. Not even a cracked rib can stop this force of nature. So proud of you baby. With everything you do! Your work ethic, your pursuit of excellence! You inspire me everyday! Crushed it today! I love you so much!" she wrote with a picture in which both were seen hugging each other.