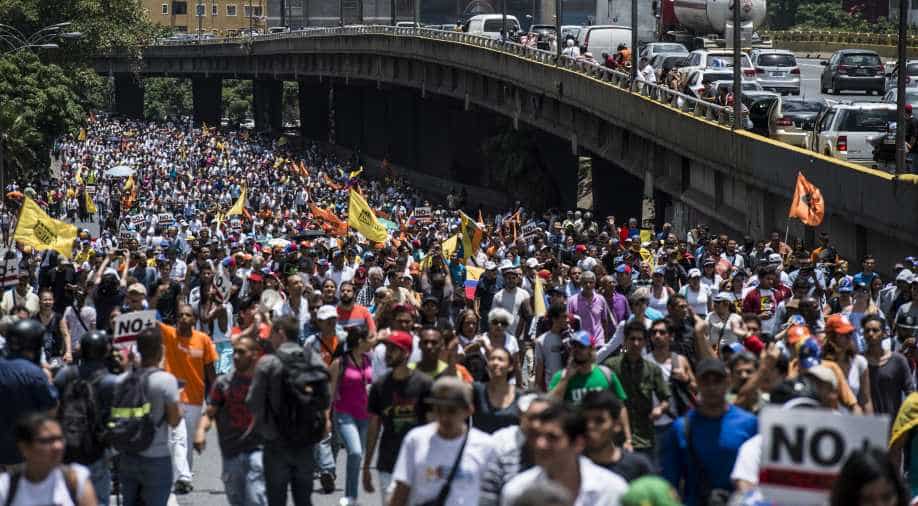 Venezuelan opposition activists take part in a protest - blocked by the National Guard - against the government of President Nicolas Maduro at the Francisco Fajardo highway. Photograph:( AFP )

The country's top court had on March 29 stripped legislative powers from the National Assembly, the sole institution that was not in control of the current government, which triggered a cascade of protests across the country and invited international censure.

The court had also undermined lawmakers' powers by exposing them to potential prosecutions.

While opponents viewed the top court's ruling as a "coup d'etat", the most stinging of criticisms came from the country's attorney general on April 1.

Attorney general Luisa Ortega had dubbed the court ruling as a "rupture of constitutional order".

Maduro had earlier hinted at the coming announcement in a televised address.

"We have reached an important agreement to solve this controversy," he said.

"Nothing has changed. The coup d'etat continues," he told reporters.

Even the international community had slammed Maduro's endeavour to widen his powers.

Thirteen members of the regional diplomacy body, including heavyweights Argentina, Brazil and Mexico, as well as the United States, had called for the Venezuelan court rulings to be declared "incompatible with democracy and a violation of the constitutional order."

But the court has overturned every law passed by the current legislature.

Venezuela has the world's biggest oil reserves, but the collapse in energy prices has sapped its revenues, prompting shortages of food, medicine and basic goods along with a surge in violent crime.

Maduro is not up for re-election until October 2018. But he has been forced to fend off opposition efforts to call a vote on removing him from power.

Venezuela emerged from dictatorship after an uprising in 1958 and has seen three further attempted military coups since 1992.

Tension has grown since Maduro took over from his late predecessor Hugo Chavez in 2013. Both have been fierce critics of the United States.

In a speech to cheering supporters late Friday, Maduro insisted "the constitution, civil, political and human rights, and people power are in full force."

But outside a supermarket in Caracas on Friday, Venezuelans queuing to buy food rations vented their frustration.

"I don't support either side," said Yandry Diaz, 18, who works in a shoe shop.

"What they want is to have us in the street, fighting and killing each other so that they can hold power."