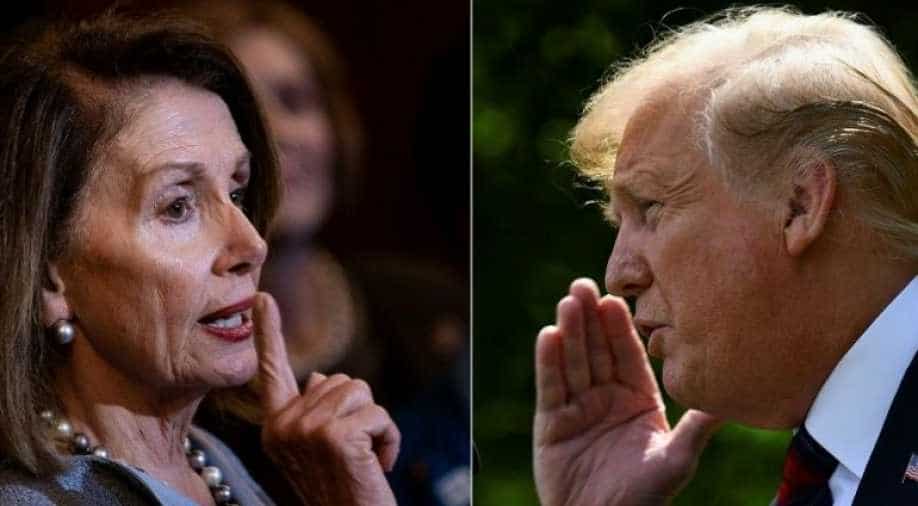 Trump responded by branding Pelosi 'crazy Nancy,' in what appeared to be the first time he ascribed a pejorative nickname to the woman who is his congressional nemesis.

Democratic congressional leader Nancy Pelosi on Thursday said Donald Trump is angry that her party is not rushing to impeach him, as the relationship reached new lows with the rivals trading crude personal barbs.

It was the second straight day of a very public war of words between Trump and the speaker of the House of Representatives, who earlier questioned the president's mental fitness for office and expressed hope that those close to Trump would stage an intervention "for the good of the country."

Trump responded by branding Pelosi "crazy Nancy," in what appeared to be the first time he ascribed a pejorative nickname to the woman who is his congressional nemesis.

The back-and-forth attacks are highlighting the bitter feud that has swelled since the release last month of the special counsel's report on Russian interference in the 2016 US election.

According to Pelosi, Trump's strategy is to get his opponents to commit themselves to impeachment -- a process that would almost certainly pass in the House, and then fail in the Republican-controlled Senate, ultimately energizing Trump's core voters during his re-election bid.

"The White House is just crying out for impeachment," she told journalists.

Trump is "disappointed" that the Democrats are holding off for now, Pelosi said, even as they intensify congressional investigations into the president's links to Russia and his alleged obstruction of justice -- probes that Trump is trying to block.

"It may take us to a place that is unavoidable in terms of impeachment or not, but we're not at that place," she said.

Under pressure from the congressional probes, Trump on Thursday ordered the US intelligence community to "fully cooperate" with an investigation into what he has termed "spying" on his 2016 election campaign.

According to Trump, court-approved surveillance of his campaign's links to Russians amounted to "spying." He has even called the probe treason and indicated he would like to see criminal charges brought against his investigators.

Pelosi, who repeated her charge that Trump was engaged in a "cover-up," goaded the president, declaring that she was praying for him and that she wished "his family or his staff or his administration would have an intervention for the good of the country."

"She's not the same person," he told reporters at the White House during a prolonged rant. "She's lost it."

Trump watched Pelosi during their meeting "and she was all crazy with the hands and everything," he said, waving his arms around for emphasis. "She is a mess."

The remarks came in a week of legal setbacks for Trump, including a federal judge's ruling that a House subpoena of Trump financial records was lawful.

"I think what really got to him was these court cases and the fact that the House Democratic caucus is not on a path to impeachment, and that's where he wants us to be," Pelosi said Thursday.

A day earlier Pelosi and other Democrats came to the White House to discuss infrastructure, only to have the president abruptly cancel the talks and proclaim there could be no progress on policy issues until Democrats end their "phoney" investigations.

Pelosi said Trump threw a "temper tantrum" at the meeting, pounded his fists on the table and then stormed out.

Trump vehemently disputed the account, and during his press event, Thursday took the unusual step of calling separately on five aides to defend their boss's behaviour.

"Very calm," said Kellyanne Conway, counsellor to the president. "They said you were fuming, temper tantrum, rage. It's a lie."

The president went so far as to praise himself as "an extremely stable genius," a line that swiftly boomeranged back at Trump in the form of a withering Pelosi tweet.

"When the 'extremely stable genius' starts acting more presidential, I'll be happy to work with him on infrastructure, trade and other issues," she posted on Twitter.

Several Democratic lawmakers and 2020 presidential contenders are eager to move forward with impeachment proceedings, citing what they say is Trump's obstruction of justice and refusal to respect congressional oversight powers.

But there are concerns among senior Democrats that the impeachment tactic could backfire, energizing Trump's base ahead of the 2020 election.

Asked directly if he was seeking that outcome, Trump was cautious.

"I don't think anybody wants to be impeached," he said while expressing confidence that American voters would see the process as "a bad thing for our country."

Republican Senator Lindsey Graham, who is close to Trump, said Democrats had hoped the Mueller report would sink the president and that they still haven't given up.

"After two years of a political rectal exam, nobody's been looked at more than Trump. They found nothing," Graham told Fox News late Wednesday.

Democrats insisting on impeachment "is just political revenge, (and) it's going to blow up in their face."