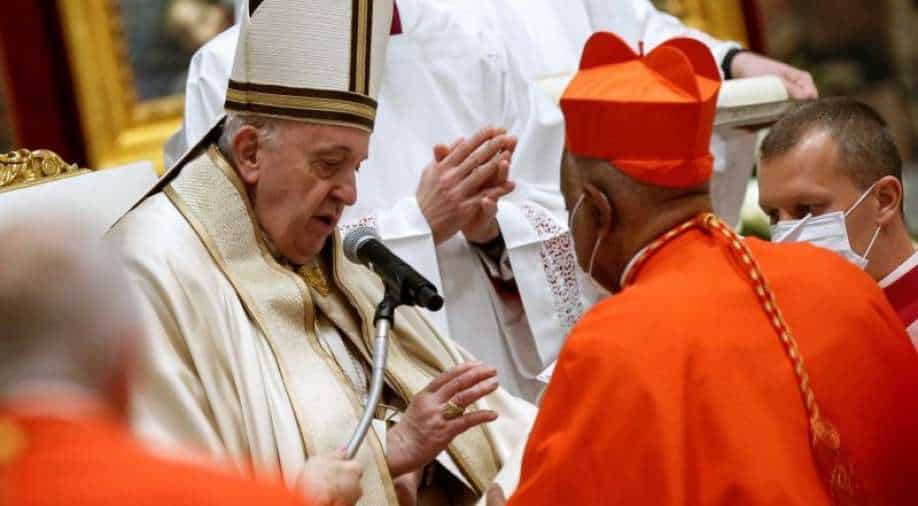 It was Francis' seventh consistory since his election in 2013. He has now appointed 57% of the 128 cardinal electors, most of whom share his vision of a more inclusive and outward-looking Church.

Pope Francis has installed 13 new cardinals, including the first African-American to hold the high rank, further expanding the pontiff's impact on the group that will one day elect his successor.

The cardinals were installed in a ceremony, known as a consistory, on Saturday.

Nine of the 13 are under 80 and eligible under Church law to enter a secret conclave to choose the next pope from among themselves after Francis dies or resigns.

It was Francis' seventh consistory since his election in 2013. He has now appointed 57% of the 128 cardinal electors, most of whom share his vision of a more inclusive and outward-looking Church.

Thus far, he has appointed 18 cardinals from mostly far-flung countries that never had one, nearly all of them from the developing world. In Saturday's consistory, Brunei and Rwanda got their first cardinals.

While Europe still has the largest share of cardinal electors, with 41%, it is down from 52% in 2013 when Francis became the first Latin-American pope.

In his homily, Francis told the men to keep their eyes on God, avoid all forms of corruption, and not succumb to a "worldly spirit" that can accompany the prestige and power of their new rank.

Wilton Gregory, the 72-year-old archbishop of Washington, DC, becomes the first African-American cardinal at a time the United States is examining race relations after a spate of police killings of unarmed Black people.

Everyone in the basilica except the pope wore a mask. Each new cardinal removed theirs when they knelt before him to be invested, except Gregory, who kept it on.

Gregory made headlines in June when he blasted President Donald Trump's visit to a Catholic shrine in Washington, after police and soldiers used tear gas and rubber bullets to clear protesters so Trump could be photographed in front of a historic Washington church holding a Bible.

Gregory said he found it "baffling and reprehensible that any Catholic facility would allow itself to be so egregiously misused and manipulated".

Gregory was one of a handful of new cardinals who were quarantined for about 10 days in their rooms in the Vatican guest house where the pope also lives. Cardinals from Brunei and the Philippines could not travel and will receive their ring and hat from a papal delegate.

Four non-electors over 80 were given the honour after a long service to the Church. The most prominent is Archbishop Silvano Tomasi, an Italian-American who has worked around the world and is one of the Church's top experts on immigration.