Moderna, racing for profits, keeps Covid vaccine out of reach of poor 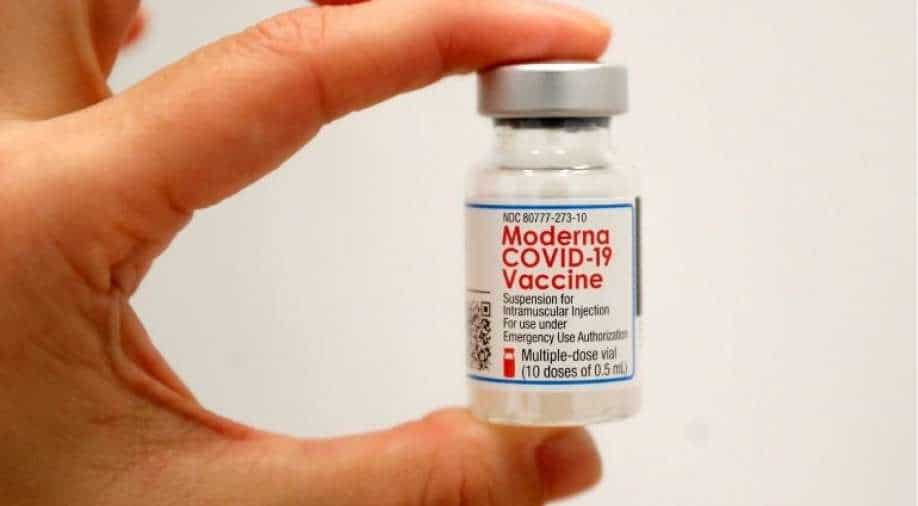 A file photo of a Moderna COVID-19 vaccine. Photograph:( Reuters )

Keeping poor countries waiting and earning billions in profit, Moderna has been supplying its shots almost exclusively to wealthy nations. It's coronavirus vaccine appears to be the world’s best defence against COVID-19

Moderna, whose coronavirus vaccine appears to be the world’s best defense against COVID-19, has been supplying its shots almost exclusively to wealthy nations, keeping poorer countries waiting and earning billions in profit.

After developing a breakthrough vaccine with the financial and scientific support of the U.S. government, Moderna has shipped a greater share of its doses to wealthy countries than any other vaccine manufacturer, according to Airfinity, a data firm that tracks vaccine shipments.

About 1 million doses of Moderna’s vaccine have gone to countries that the World Bank classifies as low income. By contrast, 8.4 million Pfizer doses and about 25 million single-shot Johnson &amp; Johnson doses have gone to those countries.

Of the handful of middle-income countries that have reached deals to buy Moderna’s shots, most have not yet received any doses, and at least three have had to pay more than the United States or European Union did, according to government officials in those countries.

Thailand and Colombia are paying a premium. Botswana’s doses are late. Tunisia could not get in touch with Moderna.

Unlike Pfizer, Johnson &amp; Johnson and AstraZeneca, which have diverse rosters of drugs and other products, Moderna sells only the COVID vaccine. The Massachusetts company’s future hinges on the commercial success of its vaccine.

“They are behaving as if they have absolutely no responsibility beyond maximizing the return on investment,” said Dr. Tom Frieden, a former head of the Centers for Disease Control and Prevention.

Moderna executives have said that they are doing all they can to make as many doses as possible as quickly as possible but that their production capacity remains limited. All of the doses they produce this year are filling existing orders from governments such as the EU.

Even so, the Biden administration has grown increasingly frustrated with Moderna for not making its vaccine more available to poorer countries, two senior administration officials said. The administration has been pressing Moderna executives to increase production at U.S. plants and to license the company’s technology to overseas manufacturers that could make doses for foreign markets.

Moderna is now scrambling to defend itself against accusations that it is putting a priority on the rich.

On Friday, after The New York Times sent detailed questions about how few poor countries had been given access to Moderna’s vaccine, the company announced it was “currently investing” to increase its output so it could deliver 1 billion doses to low-income countries in 2022. The company also said this past week that it would open a factory in Africa, without specifying when.

Moderna executives have been talking with the Biden administration about selling low-cost doses to the federal government, which would donate them to poorer countries, as Pfizer has agreed to do, the two senior officials said. The negotiations are continuing.

In an interview Friday, Moderna CEO Stéphane Bancel said that “it is sad” that his company’s vaccine had not reached more people in poorer countries but that the situation was out of his control.

He said that Moderna tried and failed last year to get governments to kick in money to expand the company’s scant production capacity and that the company decides how much to charge based on factors including how many doses are ordered and how wealthy a country is. (A Moderna spokesperson disputed Airfinity’s calculation that the company had provided 900,000 doses to low-income countries, but she did not provide an alternate figure.)

Nearly a year after Western countries began sprinting to vaccinate their populations, the focus in recent months has shifted to the severe vaccine shortages in many parts of the world. Dozens of poorer countries, mostly in Africa and the Middle East, had vaccinated less than 10% of their populations as of Sept. 30.

In August, for example, Johnson &amp; Johnson faced rebukes from the director-general of the World Health Organization and public health activists after the Times reported that doses of that shot produced in South Africa were being exported to wealthier countries.

Biden administration officials are especially frustrated with what they see as Moderna’s lack of cooperation, because the U.S. government has provided the company with critical assistance.

Scientists at the National Institutes of Health worked with the company to develop the vaccine. The United States kicked in $1.3 billion for clinical trials and other research. And in August 2020, the government agreed to preorder $1.5 billion of the vaccine, guaranteeing that Moderna would have a market for what was an unproven product.

Although clinical trials last year found that the Moderna and Pfizer vaccines were similarly effective, more-recent studies suggest that Moderna’s shot is superior. It offers longer-lasting protection and is easier to transport and store.

Moderna’s shot is “essentially the premium vaccine,” said Karen Andersen, an industry analyst at Morningstar. “They’re in a position where they probably don’t need to sacrifice too much on pricing in a lot of these deals.”

There is limited public information about the deals that Moderna has struck with individual governments. Of the 22 countries, plus the EU, to which Moderna and its distributors have reported selling the shots, none are low income, and only the Philippines is classified as lower-middle income. (Six are upper-middle income.)

Pfizer, by comparison, said it had agreed to sell its vaccine at discounted prices to 12 upper-middle-income countries, five lower-middle-income governments and one poor country, Rwanda. (Tunisia, for example, is paying about $7 per dose.)

Only a handful of governments have disclosed how much they are paying for Moderna doses. The United States paid $15-$16.50 for each shot, on top of the $1.3 billion the government gave Moderna to develop its vaccine. The EU has paid $22.60-$25.50 for its Moderna doses.

Botswana, Thailand and Colombia, which the World Bank classifies as upper-middle-income countries, have said they are paying $27-$30 per Moderna dose.

The lack of transparency about how much other governments are paying has put relatively poor countries in a weak bargaining position. They are “negotiating totally in the dark,” said Kate Elder, who advises Doctors Without Borders on vaccine policy.

In some cases, Moderna has offered to provide poorer countries the vaccine at relatively low prices, but only after it has fulfilled other countries’ orders.

In May, Moderna offered the African Union doses for about $10 each, according to a bloc official involved in the discussions. But the doses would not be available until next year, causing the talks to fall apart, according to two African Union officials.

Dr. Ayoade Alakija, who helps run the African Union’s vaccine delivery program but was not involved in the procurement discussions, said Moderna’s attitude amounted to, “We’re here to make money. We’ve stumbled upon a good thing, and we’re not even trying to pretend that we’re trying to save the world.”

Moderna’s COVID vaccine has been transformative for the company and its leaders. The company has said it expects its vaccine to generate at least $20 billion in revenue this year, which would make it one of the most lucrative medical products in history. Andersen, the Morningstar analyst, projected that the company’s profits on the vaccine could be as high as $14 billion. In 2019, Moderna reported total revenue of $60 million.

Moderna’s market value has nearly tripled this year to more than $120 billion. Two of its founders, as well as an early investor, this month made Forbes magazine’s list of the 400 richest people in the United States.

As the coronavirus spread in early 2020, Moderna raced to design its vaccine — which uses a new technology known as messenger RNA — and to plan a safety study. To manufacture the doses for that trial, the company received $900,000 from the nonprofit Coalition for Epidemic Preparedness Innovations.

The nonprofit group said Moderna had agreed to its “equitable access principles.” That meant, according to the coalition, that the vaccine would be “first available to populations when and where they are needed and at prices that are affordable to the populations at risk, especially low- and middle-income countries or to public sector entities that procure on their behalf.”

Moderna agreed in May to provide up to 34 million vaccine doses this year as well as up to 466 million doses in 2022 to Covax, the struggling United Nations-backed program to vaccinate the world’s poor. The company has not yet shipped any of those doses, according to a Covax spokesperson, although Covax has distributed tens of millions of Moderna doses donated by the United States.

Bancel said many more doses would have gone to Covax this year had the two parties reached a supply deal in 2020. Aurélia Nguyen, a Covax official, denied that, saying, “It became clear early on that the best we could expect was minimal doses in 2021.”

Late last year, the Tunisian government was hoping to order Moderna doses. Dr. Hechmi Louzir, who led Tunisia’s vaccine procurement efforts, did not know how to contact Moderna to begin talks and asked the U.S. Embassy in Tunisia for help, he said. Officials there contacted Moderna, he said, but nothing came of it.

“We were very interested in Moderna,” Louzir said. “We tried.”

In Thailand, where about 32% of people are fully vaccinated, a government spokesperson said the government was paying Moderna about $28 per dose for 1 million shots that are designated for vulnerable people. Deliveries from that order will start next year.

In Botswana, the health minister told Parliament in July that the government had ordered 500,000 shots from Moderna at nearly $29 per dose — enough to fully vaccinate about 10% of the population. (That would roughly double the number of Botswanans who are fully vaccinated.) A spokesperson for the Health Ministry said that the doses were expected to start arriving in August but that none had yet arrived.

Colombia ordered 10 million shots from Moderna. The government budgeted about $30 per dose, a price that may include the cost of transportation and other logistics, according to Finance Ministry documents. The country's health minister, Dr. Fernando Ruiz, said Moderna’s vaccine was the most expensive among the COVID shots that Colombia had ordered.

There were some initial delays, Ruiz said. The first deliveries, expected in early June, came in August. About 2.3 million had arrived as of Friday.