Iraq's ravaged town of Qaraqosh embodies IS' appetite for destruction 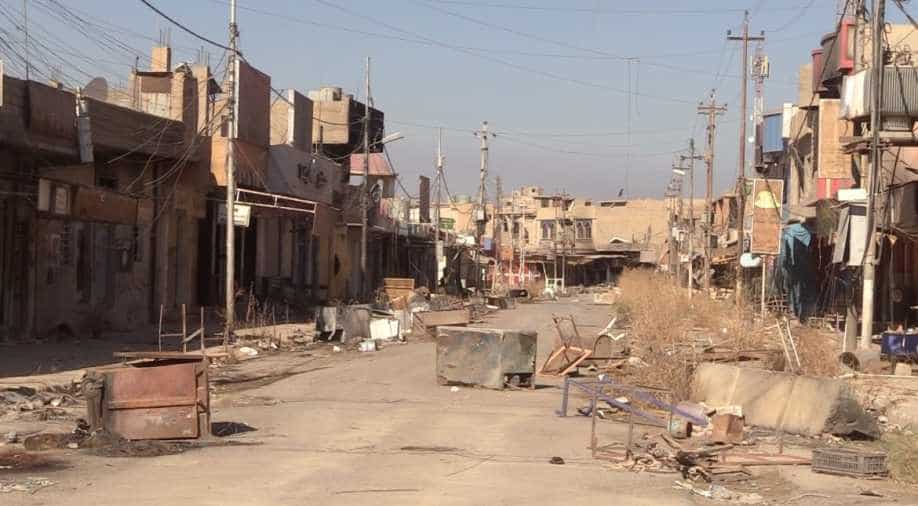 The city is almost completely destroyed, houses have been vandalised, shops have been torched and churches have been used as shooting camps and Improvised Explosive Devices (IED) factories. Photograph:( WION )

“Sir, you have been there…to my town? How is the situation?” asks the barber.

He comes from Qaraqosh, the main Christian city in northern Iraq which the Islamic State (IS) recently lost after two years of occupation.

It is not easy to answer— the city is almost completely destroyed, houses have been vandalised, shops have been torched and churches have been used as shooting camps and Improvised Explosive Devices (IED) factories.

“I am afraid to tell you that the situation is very bad. It will take time for you to go back.”

He smiles, interprets this reporter’s concern and says: “No problem sir, you don’t have to be sad. Houses, streets, we can build everything again. The important thing is that we are alive. Now, come! It is time to shave your beard, I know you journalists never have time.”

The barber, just like many other refugees, lives in Ainkawa, a Christian enclave in the city of Erbil. He requested anonymity, specifying that he would love to be called just “the barber”, the Barber of Qaraqosh.

Before the Islamic State came in August 2014, Qaraqosh was lively. But when IS came, fifty thousand people had to flee. They knew the terrorist organisation would show them no mercy. Except for some elders and those very ill, everyone left. Destinies of those who stuck on remain unknown.

The Barber of Qaraqosh is a talkative man. As he shaves my beard he describes his city, the barber shop he had with his brother and his many memories of the town.

“You know sir, if you go there, where the main street crosses the hospital, my shop is there. You can see my face on the board (of the shop),” he says.

With a glint in his eye, he talks about returning to his hometown. "No problem, we have waited for two years sir, there is no problem in waiting some more months.”

There was no point in extinguishing the slivers of hope he harbours, but it was difficult to imagine the town described to me by the Barber.

Today, Qaraqosh is a ghost town. The abandoned buildings bear the scars of the heavy battles that raged for the last few years. Houses have been destroyed by air strikes, some have been damaged from the inside and some razed to the ground.

Islamic State fighters ensured the town was ravaged. They burned and destroyed everything they could lay their hands on: refrigerators, furnitures, sofas, shops, cars...

All the houses we visited were completely vandalised. Their idea was to leave behind a trail of enduring destruction.

Father Patros, who was a priest in one of the churches in Qaraqosh, showed us the house where he lived. The walls remained intact, but the interior of the house was destroyed. The boundary wall was partially broken too so as to create a passage between the priest's home and the next and allow IS personnel to move quickly when counter-attacking.

The other thing one observes is that many buildings in the town have bordering basements. Islamic State brought down the walls dividing them and connected the basements, to allow them to move around underground without being seen.

IS vestige removed, but fears persist

There are no more IS jihadists in Qaraqosh. The last instance of violence was reported on November 3. The city is now under the control of the Nineveh Protection Units (Assyrian Christian militia) whose soldiers are mainly from this area. But tensions continue to run high.

During our visit, we were at one point asked to hide behind a wall, for the soldier heard a suspicious noise. It is not unusual for snipers to remain hidden for days and then carry out surprise attacks.

It will take months before civilians are allowed to return to their homes.

IS scattered the city with IEDs and it will take a while before they are removed. Every single object could be an active bomb. The objects could explode by simply moving them.

We spotted a phone placed on a wall, in a very conspicuous position, too perfectly placed with its receiver on and an IS propaganda pamphlet embedded underneath it. It is impossible to know if it is an IED, but the anomalous place and the pamphlet seem like an invitation to raise the receiver, thereby triggering a bomb.

It is impossible to know if it is an IED, but the anomalous place and the pamphlet seem like an invitation to raise the receiver, thereby triggering a bomb. (WION)

Many devices have already been detonated, but many could still be placed inside the houses. The danger of random explosions could persist for months; Qaraqosh is not a small village and it is virtually impossible to check every single corner. Driving back to the NPU base in the town, we come across a rudimentary armoured vehicle which IS meant to launch against the troops entering the city. The car was gunned down by light artillery, but it still contains all the explosives and could blast at anytime.

We come across a rudimentary armoured vehicle which IS meant to launch against the troops entering the city. The car was gunned down by light artillery, but it still contains all the explosives and could blast at anytime. (WION)

Buildings and infrastructure are not the only things that got destroyed in these two years under Islamic State control. “Father Patros do you think it will ever be possible to rebuild the social fabric of the city, to live together with the muslim population in peace?”

“I don’t know. I am a Christian priest and I must be tolerant, I must put all my effort. Many of us though know that people from the nearby villages helped the Islamic State, and it will be very difficult to go back to normality.”

This is one of the many situations the invasion of the Islamic State worsened in an already divided and potentially sectarian society. It brought suspicion among the people, and mistrust toward whoever did not flee, who are believed to have supported the terrorist organisation. Suspicion is an enemy of coexistence, and rebuilding a peaceful society where the many souls of Iraq will live together will probably be the most difficult problem to solve after IS' defeat.