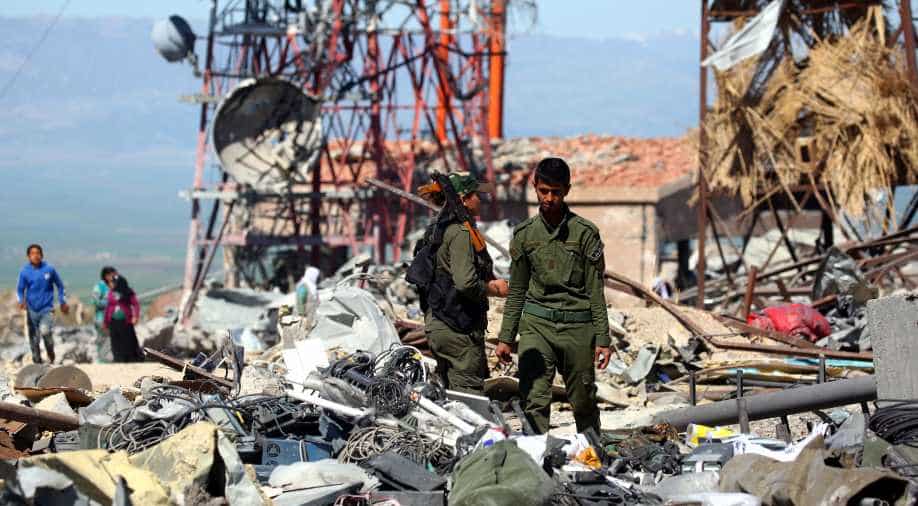 Fighters from the Kurdish People's Protection Units (YPG) and Kurdish police, known as the Asayish, visit the site of Turkish airstrikes on Tuesday (April 25). Photograph:( AFP )

Germany, along with many of its allies, has condemned the offensive that Ankara says is targeting the Kurdish People's Protection Units (YPG) militia -- a force that has played a key role against the Islamic State group in Syria.

Germany said Saturday it is halting sales of weapons to Turkey over its widely criticised operation against Kurdish militias in northern Syria.

Germany, along with many of its allies, has condemned the offensive that Ankara says is targeting the Kurdish People's Protection Units (YPG) militia -- a force that has played a key role against the Islamic State group in Syria.

It joins the fellow NATO members the Netherlands and Norway, along with Finland, in suspending arms sales to Turkey.

"In the context of the Turkish military offensive in northeastern Syria, the government will not issue any new permits for any military equipment that could be used in Syria by Turkey," German Foreign Minister Heiko Maas was quoted as telling the Sunday edition of Bild.

And in the first four months of this year, sales to Turkey -- its biggest customer in the transatlantic military alliance -- reached 184 million euros.

"(The offensive) is a vital issue for us and a question of national security, a matter of survival. No matter what anyone is doing, whether it is an arms embargo or something else, it only strengthens us," he told Deutsche Welle.

Ankara considers the YPG a "terrorist" offshoot of Kurdish rebels who have been fighting an insurgency against the Turkish state for three decades.

Germany is one of the world's biggest arms exporters along with the United States, Russia, China, Britain and France.

Last year it imposed an embargo on weapons sales to Saudi Arabia after the killing of the journalist Jamal Khashoggi in Riyadh's consulate in Istanbul.

Maas this week warned that Turkey's operation risked the resurgence of IS in the region and that it could trigger a humanitarian disaster.