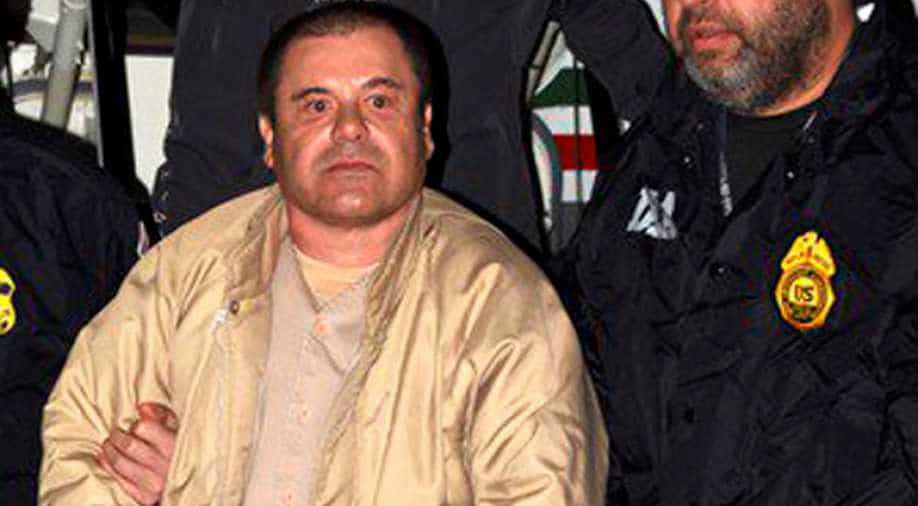 Mexican drug lord Joaquin "El Chapo" Guzman was captured in 2016, for a third time, leading to his conviction by a US court over trafficking hundreds of tons of drugs.

Here is a recap of the dramatic captures and escapes of the notorious crime boss as he was sentenced in New York on Wednesday:

Head of the powerful Sinaloa drugs cartel, Guzman was in his mid-30s when he was arrested for the first time in June 1993 just across the border in Guatemala.

He had fled Mexico following the high-profile assassination of a Roman Catholic cardinal who had apparently been mistaken for Guzman.

Cardinal Juan Jesus Posadas Ocampo died in a hail of bullets in May 1993 as he was leaving an airport in a car identical to the one used by Guzman.

The hit was blamed on the rival Tijuana cartel.

Guzman was sentenced to 20 years in prison for murder and drug trafficking but continued to be active from behind bars.

In January 2001 he was secreted out of his maximum-security prison in a cart of dirty laundry with the help of bribed accomplices, including the prison director and guards.

He was a fugitive for 13 years during which his drug empire grew to control a full quarter of the traffic of illicit narcotics headed to the United States.

In 2013, the city of Chicago - a popular destination for Sinaloa drugs - named him its Public Enemy No. 1, the first since the gangster Al Capone in the 1920s.

In February 2014, Mexican authorities tracked Guzman down to a condo in the beach town of Mazatlan, in his native state of Sinaloa, where he was with his wife and their twin daughters.

Arrested in a pre-dawn raid, he was publicly hauled away in handcuffs by masked marines and bundled into a police helicopter, and later paraded in front of television cameras.

Seventeen months later, the drug baron was free again, fleeing his cell in Mexico's high-security Altiplano prison in June 2015 via a 1.5-kilometre (one-mile) tunnel dug out by his henchmen.

From a hole under the shower in his cell, the tunnel opened in an under-construction building. Lit and ventilated, it contained a modified bike mounted on rails on which Guzman zoomed to freedom.

His cell had been under 24-hour video surveillance but he disappeared in a blind spot at the shower intended to protect inmate privacy.

After just six months, Mexican President Enrique Pena Nieto was able to announce in January 2016, "Mission accomplished: We got him."

Authorities had located Guzman in a house in Los Mochis, a seaside city in Sinaloa. When security forces swooped in Guzman fled through the city's drainage system.

He came out of a manhole and stole a car, but was captured by marines who had anticipated the move.

Authorities said Guzman was betrayed by his desire to have a biographical film made, for which he made contact with a leading Mexican actress and producers.

The previous October he had held a clandestine jungle meeting with US actor Sean Penn.

Guzman was returned to the Altiplano prison, this time forced to regularly change rooms and with metal rods installed to prevent more digging.

The fallen kingpin was extradited to the United States in January 2017 and held in a windowless cell at a maximum-security prison in New York.

His trial opened in November 2018 with Guzman accused of co-directing the Sinaloa cartel for over 25 years and smuggling hundreds of tons of cocaine, heroin, methamphetamines and marijuana into the United States.

He was found guilty in February 2019. Now 62 years old, prosecutors are calling for Guzman to spend life plus 30 years in jail.