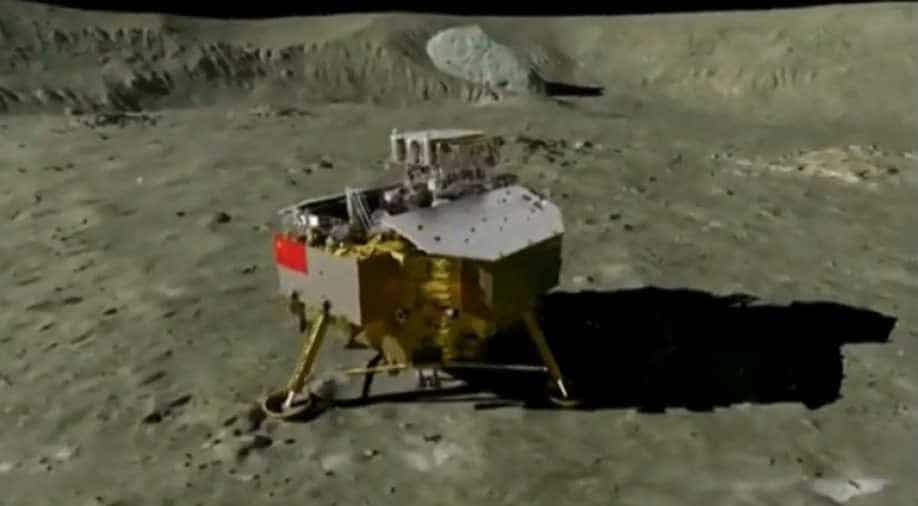 The Chinese spacecraft became the first misson to land on the lunar far side also known as the dark side of the moon in January. The rover Yutu-2 then rolled off the lander to explore its surroundings.

China's Chang'e-4 mission, the first to perform a soft landing on the far side of the Moon, has shed light on the chemical and mineralogical composition of the lunar mantle, an advance that could unravel the mystery of the evolution of Earth and its natural satellite.

The Chinese spacecraft became the first misson to land on the lunar far side also known as the dark side of the moon in January. The rover Yutu-2 then rolled off the lander to explore its surroundings.

Using data obtained by the visible and near infrared spectrometer installed on Yutu-2, a research team led by Li Chunlai, with the National Astronomical Observatories of China under the Chinese Academy of Sciences, found that the lunar soil in the landing area of the Chang'e-4 probe contains olivine and pyroxene which came from the lunar mantle deep inside the Moon.

The first important scientific discovery of the Chang'e-4 probe was published online in the latest issue of the academic journal Nature.

The Moon comprises a core, mantle and crust, like the Earth. With the evolution of lunar magma, the light plagioclase rose to the upper layer to form the lunar crust, while the heavier olivine and pyroxene sank to form the lunar mantle, Li said.

"But since the lunar crust is very thick, and there has been no volcanic activity and plate movement on the Moon for billions of years, it's hard to find materials from the lunar mantle on the surface," Li told state-run Xinhua news agency.

As a result of the tidal locking effect, the Moon's revolution cycle is the same as its rotation cycle, and the same side of the Moon always faces the Earth.

The lunar far side, which is turned away from Earth, is more rugged than the familiar near side and has fewer "maria" - dark plains formed by ancient volcanic eruptions.

But that smaller crater lies within the 2,300 kilometer wide South Pole Aitken (SPA) Basin, which covers nearly a quarter of the Moon's circumference.

It is not known exactly how old the SPA Basin is, but is thought to be at least 3.9 billion years old. The asteroid that carved it out is thought to have been about 170-kilometer wide, BBC reported.

The rover has now identified rocks with a very different chemical make-up to those found elsewhere on the moon, the report said.

Early results from the rover's Visible and Near Infrared Spectrometer (VNIS) suggest the rocks contain minerals known as low-calcium (ortho)pyroxene and olivine.

They fit the profile of rocks from the lunar mantle and suggest that the ancient impact that created the SPA drove right through the 50-kilometer deep crust into the mantle.

Observational data taken by the Moon-orbiting spacecraft have been inconclusive as to the presence of mantle rocks on the surface.

The authors of the paper want to continue their examination of these rocks and find others.

They have also raised the possibility of sending another mission to deliver some of them to Earth for study in laboratories.

The results could now help scientists understand the chemical and mineralogical composition of the mantle, which could shed light on the origins and evolution of the moon itself, it said.

The team members also want to find out more about what happened after the asteroid collided with the Moon and formed the SPA Basin.

Scientists predict that the hole in the surface may have been filled by molten rock - forming a "melt sheet" within the impact bowl, which complicates the picture of this region's geology.

Patrick Pinet, from the Research Institute in Astrophysics and Planetology (IRAP) in Toulouse, France, called the results "thrilling" and said they "could have considerable implications for characterising the composition of the Moon's upper mantle".

"It is of the utmost importance to make progress towards unpacking the geology of the lunar far side, expanding our fundamental knowledge of the Moon's formation and the origin of the crustal asymmetry that exists between its near and far sides, and preparing future sample-return missions," he said.