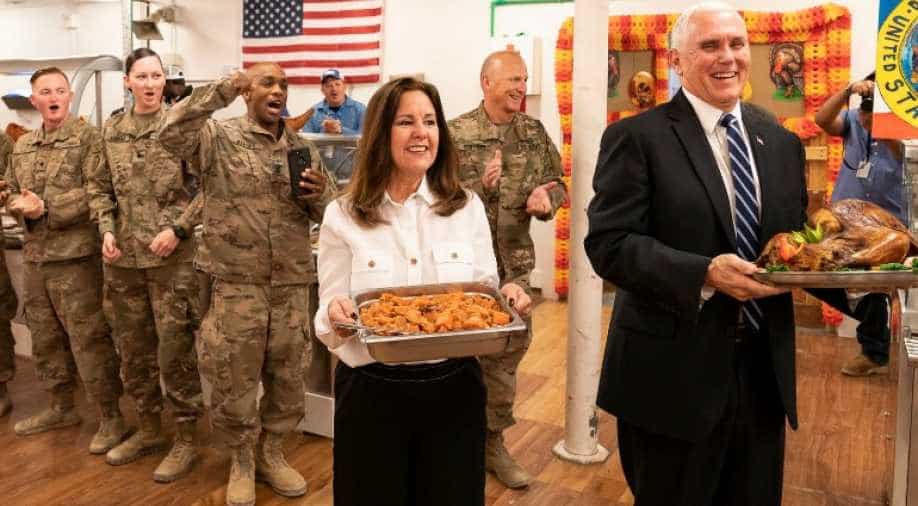 In his first visit as vice president, Pence visited American troops at Ain al-Asad base in western Iraq's Anbar province, but was not expected to travel to the capital.

In his first visit as vice president, Pence visited American troops at Ain al-Asad base in western Iraq's Anbar province, but was not expected to travel to the capital.

His trip came after weeks of anti-government rallies across Baghdad and the south.

"There won't be a meeting as they had a phone call. The prime minister isn't going to Anbar" to meet Pence, one source said.

President Barham Saleh's office told AFP it was not aware Pence was coming to Iraq and had no meeting planned. The US embassy said it had no details to share.

Pence tweeted images of himself and his wife speaking to US forces and carrying a roast turkey, traditionally served during the American Thanksgiving holiday celebrated next week.

"Happy Thanksgiving from Iraq. @SecondLady and I are so honoured to be with our Soldiers, Sailors, Airmen, and Marines here in Iraq!" he tweeted.

Happy Thanksgiving from Iraq. @SecondLady and I are so honored to be with our Soldiers, Sailors, Airmen, and Marines here in Iraq! We are so proud of you and thankful for you all! pic.twitter.com/bzcM1fGgiG

The visit echoed President Donald Trump's own surprise trip to Ain al-Asad a year ago, where he briefly met troops just after Christmas but controversially did not see officials in Baghdad.

Trump's visit was veiled in such secrecy that there was speculation most Iraqi authorities had not been told he president was coming.

Pence's trip came as the death toll from weeks of anti-government rallies across Iraq's capital and the south rose even further.

One protester was killed and 17 were wounded in clashes with security forces Saturday on the Al-Ahrar bridge in Baghdad, a medical source said.

Demonstrators have massed on three main bridges leading from their protest camp in Tahrir (Liberation) Square to the western bank of the river Tigris, where government offices and foreign embassies are based.

Since Thursday, nine protesters have been killed in skirmishes with security forces there.

Around 350 people have been killed and 15,000 wounded since demonstrations erupted on October 1 amid outrage over rampant government corruption and lack of jobs.

Protesters are demanding a total overhaul of the ruling system in place since the US-led invasion of 2003 that toppled then-dictator Saddam Hussein.

The US then dismantled Iraq's security forces and tried to rebuild the country's institutions by working closely with a newfound political class.

But ties are now at their "coldest" since 2003, American and Iraqi officials have told AFP.

Abdel Mahdi, in office for the past year, has yet to visit Washington amid frustrations in the White House that his office was "too close" to Tehran.

Tensions between the US and Iran have spiralled since Washington unilaterally pulled out of the 2015 deal over the latter's nuclear programme and began imposing a series of crushing sanctions.

Baghdad, which has close ties with both countries, has feared being caught in the middle.

'Not welcome in Iraq'

In July, the US singled out the leaders of two paramilitary groups in Iraq that Pence accused of being tied to Iran.

Rayan al-Kildani and Waad Qado -- the former a Christian and the latter a member of the Shabak minority -- were both sanctioned over "serious human rights abuse" by them or their organisations.

Kildani reacted to Pence's visit on Saturday, tweeting: "To the American vice president who came to Iraq stealthily... You are not welcome on Iraqi territory."

Kildani and Qado's factions belong to the Hashed al-Shaabi, a powerful Shiite-majority paramilitary network that includes many groups with close ties to Tehran.

Hashed leaders and Iran have been widely criticised in the recent protests, accused of defending the very government the demonstrators want to bring down.

Many of their offices have been burned in Iraq's restive south, the scene of new protests on Saturday.