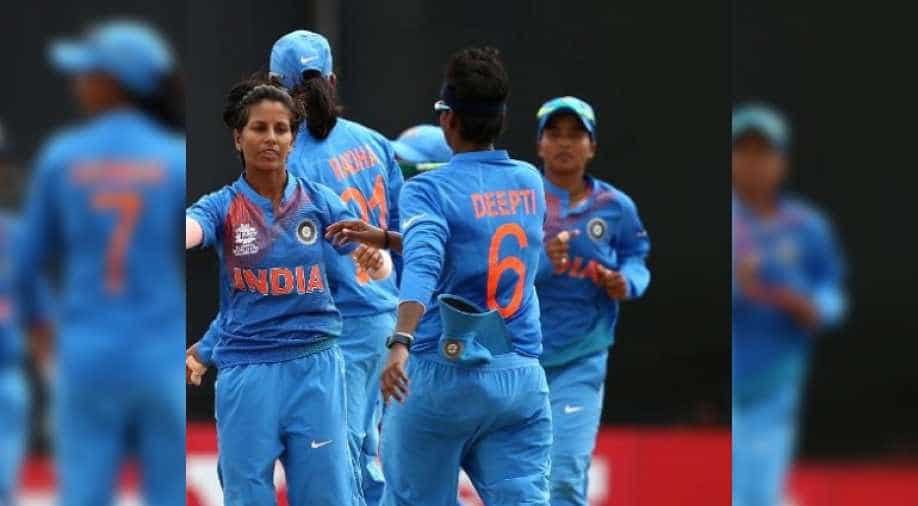 India thus notched up their fourth victory in as many matches to top group B.

Opener Smriti Mandhana smashed a career-best 83 before Indian slow bowlers spun their web against Australia to continue their invincible run with a 48-run win in a group B match of the ICC Women's World Cup here on Saturday.

Mandhana blasted 9 fours and 3 sixes in her 55-ball innings and shared a 68-run third wicket partnership with skipper Harmanpreet Kaur (43 runs off 27) to power India to a competitive 167 for 8 at the Providence Stadium here.

Alyssa Healy was absent hurt following a collision with Megan Schutt in the Indian innings.

India thus notched up their fourth victory in as many matches to top group B. They will now take on either England or West Indies in the second semifinals. Both India and Australia were already in the semifinals after winning the first three matches in group B.

Chasing 168 to win, Beth Mooney (19) and Elyse Villani (6) opened the innings after in-form Healy didn't come out to bat following a collision during the Indian innings which left the wicket-keeper batsman with mild concussion.

A big worry for Australia with Alyssa Healy taking a nasty blow in a collision with Megan Schutt. Fingers crossed she's going to be ok - she hasn't opened the batting in the chase.

However, Deepti Sharma struck twice in successive balls, removing both the openers as Australia slipped to 27 for 2 in 4.2 overs.

Poonam Yadav then got rid off Ashleigh Gardner (20) with Veda Krishnamurthy taking another catch at long-off when the batsman tried to play another big shot.

India continued to put pressure on the Australians before Perry blasted three boundaries in the 15th over off Harmanpreet to ease the pressure.
Poonam then returned to pick up another wicket when she deceived RL Haynes with her flight and wicket-keeper Taniya Bhatia did the rest.

The Australia innings crumbled after that even as EA Perry scored an unbeaten fighting 28-ball 39 laced with three fours and a six.

Earlier, Mandhana became the second fastest Indian to compete 1000 runs in T20 internationals after Mithali Raj as she anchored the innings with a superb fifty.

Mandhana gave India a good start after her fellow opening batswoman Taniya Bhatia (2) was dismissed in the second over, being caught by Lanning at midwicket off Gardner's ball.

Australia picked up a second Indian wicket in the 7th over when Delissa Kimmince dismissed Jemimah Rodrigues (6).

Skipper Harmanpreet then joined Mandhana in the middle as the duo dominated the bowlers.

Harmanpreet smashed Molineux over midwicket for her first six, while a beautiful-looking sweep shot helped Mandhana to complete her fifty in 31 balls.

Harmanpreet then hoisted one over extra cover off Gardner to pick up her second six as India reached 83 for 2 in 10 overs.

In the 14th over, Harmanpreet slapped one over extra cover before depositing a full toss by Kimmince over short fine leg.

However an attempt to go for another big shot proved fatal as she was caught by Haynes to leave India at 117 for 3 in 13.3 overs.

In the next over, Mandhana too was on her way back to the hut when she was adjudged LBW by the on-field umpire but she survived after a video referral showed the ball pitched outside leg.

India however lost a bit of ground in the end following the quick wickets of Veda Krishnamurthy and Dayalan Hemalatha within a space of four balls.

In the 18th over, Mandhana hit a six and a four off Kimmince as India amassed 17 runs but Schutt removed the opener in the next over.

There was also an unfortunate collision in the 19th over between Megan Schutt and wicket-keeper Alyssa Healy as both went for a catch, following a miscued hit by A Reddy.