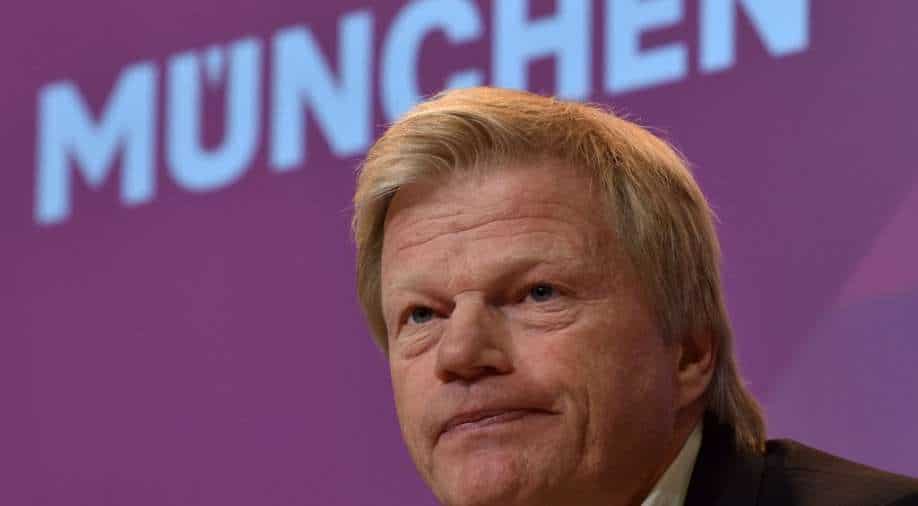 On the pitch, legendary Germany goalkeeper Oliver Kahn had a reputation for a fiery temper, but he has since mellowed enough to become the next chairman of Bundesliga giants Bayern Munich.

On the pitch, legendary Germany goalkeeper Oliver Kahn had a reputation for a fiery temper, but he has since mellowed enough to become the next chairman of Bundesliga giants Bayern Munich.

The 51-year-old will replace outgoing chairman Karl-Heinz Rummenigge, who will step down at the end of June after 30 years in the club's administration.

As a player, Kahn earned nicknames 'King Kahn' and 'Vol-Kahn-o' for his fierce competitive nature.

He won eight Bundesliga titles and lifted the German Cup on six occasions with Bayern before retiring in 2008 after 14 years with the club.

Since hanging up his gloves, Kahn has been steadily integrated into Bayern's management, joining the club's board in January 2020 and groomed to replace Rummenigge, 65.

Kahn has toned down his temper since once famously demanding "balls, we need balls!" during a post-match interview as Bayern captain.

He is remembered in Germany not only for his stunning saves which helped Bayern win the 2001 Champions League final on penalties, but also for a biting incident in 1999.

During a Bundesliga match, he nuzzled his teeth into the neck of bemused Dortmund forward Heiko Herrlich.

In a 2010 interview, Kahn admitted the incident forced him to curb his temper.

"That was the zenith of my aggression and it erupted inside of me," he told Munich-based Sueddeutsche Zeitung.

"That was some kind of internal force inside me signalling: I can't go on like this."

Three-times voted the world's best goalkeeper during his career, Kahn has kept busy since retiring.

He earned his coaching licence in 2010, worked as a TV pundit and completed an MBA in 2012, writing his thesis on "Strategic management in Germany's professional football".

After an 18-month apprenticeship, he will take the reins of Bayern next month.

The 2021-22 season will herald a new era for the Bundesliga giants with Julian Nagelsmann, 33, also replacing Hansi Flick as head coach.

Kahn certainly has the pedigree, having kept 247 clean sheets in 632 appearances for Bayern.

Bayern are expecting a seemless transition of power from Rummenigge to Kahn.

"After his extremely successful professional career and his time as an entrepreneur, he has now been intensively involved in the board of directors of FC Bayern Munich," said club president Herbert Hainer in a statement Tuesday.

"We are all convinced that Oliver Kahn is the right man to successfully shape the future of FC Bayern Munchen AG."

However, he will have to develop his diplomatic skills in the spotlight at Bayern Munich.

His no-nonsense approach has polarised opinions of Kahn in Germany and as chairman, he will demand success at Bayern just as much as he did as a player.

The sight of Kahn charging out of his goal terrified opposing strikers, but he was just as difficult with team-mates.

He famously fell out with Bayern colleagues Luca Toni and Franck Ribery just before retiring at the end of 2007-08.

It took the arrival of future Bayern and German captain Manuel Neuer in 2011 to finally fill Kahn's impressive shoes after a string of hopefuls failed to hold down the number one shirt in Munich.

In his autobiography, soberly titled "Number One", Kahn describes himself as "determined and possessed like no other".

With 'King Kahn' as their driving force at the helm, Bayern are now showing no sign of loosening their iron grip on the Bundesliga.

No sooner had Bayern secured a ninth straight title last month, than Kahn challenged the team to make it a decade of German league titles.