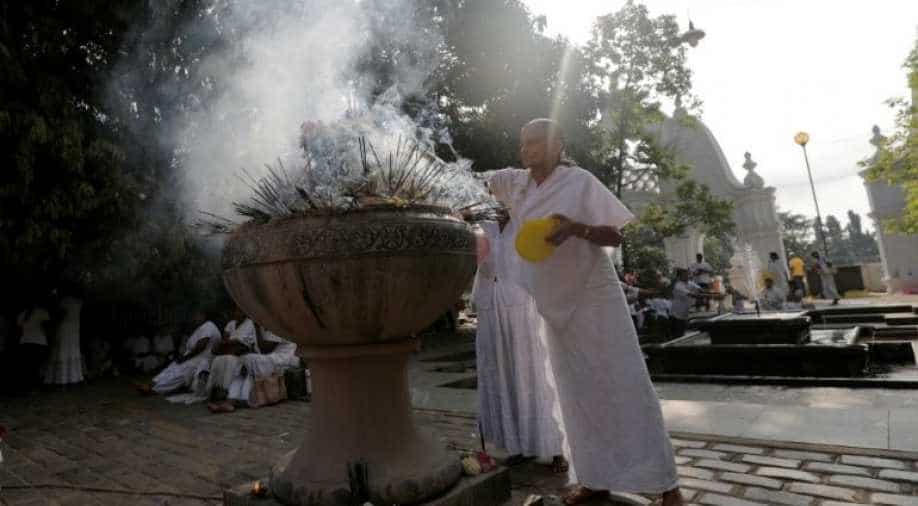 Vesak, a festival that commemorates the birth, enlightenment and death of the Lord Buddha, is celebrated on a full moon day in May, with the festivities extending for at least a week.

Vesak, a festival that commemorates the birth, enlightenment and death of the Lord Buddha, is celebrated on a full moon day in May, with the festivities extending for at least a week.

But the typical colourful lanterns and brightly-lit shelters with descriptions of the life of the Buddha were largely missing, as was the tradition of giving out food to passers-by.

The festival comes a week after mob attacks on Muslim-owned homes, mosques and shops in the island nation's northwest, in which one person was killed. Authorities said the rioters included Sinhala Buddhist extremists.

The attacks on minority Muslims follow the April 21 bombings by Islamist militants which killed more than 250 people in churches and hotels in and around the capital Colombo.

The number of Buddhist worshippers at the popular Keleni Raja Maha Viharaya temple on the outskirts of Colombo seemed to have halved from last year amid stepped-up security, a Reuters witness said.

A "checked" sticker was pasted on every visitor after they and their belongings were searched outside the temple.

"We can't only depend on the military, we have to be mindful and do our best to protect ourselves," said Anette Perera, 64, who was on her way to a temple in the Colombo suburb Kaduwela.

"I still feel unsafe and will make a floral offering at the temple and return (home) as soon as I can."

Some Sri Lankans tried to preach a message of peaceful co-existence.

At the Gunawardhanaramaya temple in Colombo, Tamil Hindus and Catholics hosted an "iftar" meal for Muslims breaking their holy month of Ramzan fast in the evening. Some Muslims helped decorate Buddhist temples with flags and Vesak lanterns.