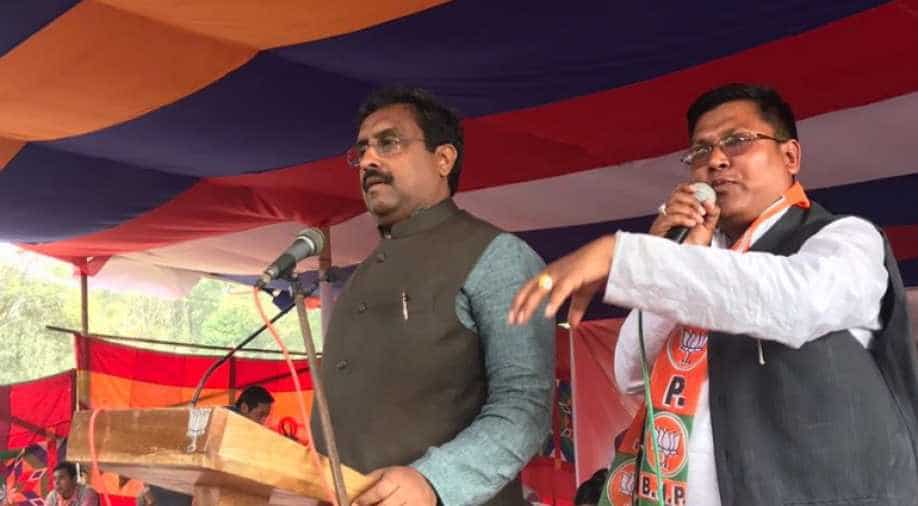 Madhav alleged that the double bedroom housing scheme announced by the TRS government had become an unfulfilled promise. Photograph:( Twitter )

Dubbing TRS as a 'family outfit,' BJP General Secretary Ram Madhav on Wednesday said the K Chandrasekhar led-party was apprehensive of losing the assembly elections, had it been held along with the general elections in 2019.

Addressing BJP booth level workers at Armoor in Nizamabad district, he said people had given a five year mandate to the Chief Minister. But he 'gave up' in just four years.

"Now what is the guarantee that you (KCR) will not run away (if you come to power) after four years?" he asked.

"Why are we going for elections in four years? Because KCR is apprehensive that he will not win if the assembly elections are held along with Lok Sabha elections in 2019," he said.

Madhav alleged that the double bedroom housing scheme announced by the TRS government had become an unfulfilled promise.

He said the Modi government had taken the initiative of providing a house to every poor family in the country by 2022.

"The BJP government had promised five crore houses to the poor by 2022. This year we sanctioned one crore houses," he said.

Madhav said that on the health care front, the BJP government had launched the Ayushman Bharat scheme to provide quality and specialised health care facilities worth up to Rs five lakh to the poor.

"Telangana has achieved a record in corruption during the past four years. It occupies second position among the corrupt states in the country," he alleged

"Modi does not have a family, so there is no question of family rule.

But in Telangana, it is not only family rule, it is Beta (son), beti (daughter) and mai (me)," he charged.

Ram Madhav said TRS could get only a narrow margin of 63 seats (of 119 seats) during the 2014 elections despite bragging about achieving statehood.

But KCR lured members of other paties into TRS, he alleged.

Hitting out at Andhra Pradesh Chief Minister N Chandrababu Naidu, Ram Madhav alleged that both he and his Telangana counterpart provide corrupt governance.