Princess Diana's Travolta dress that didn't find takers in auction, gets sold for more than $280,000 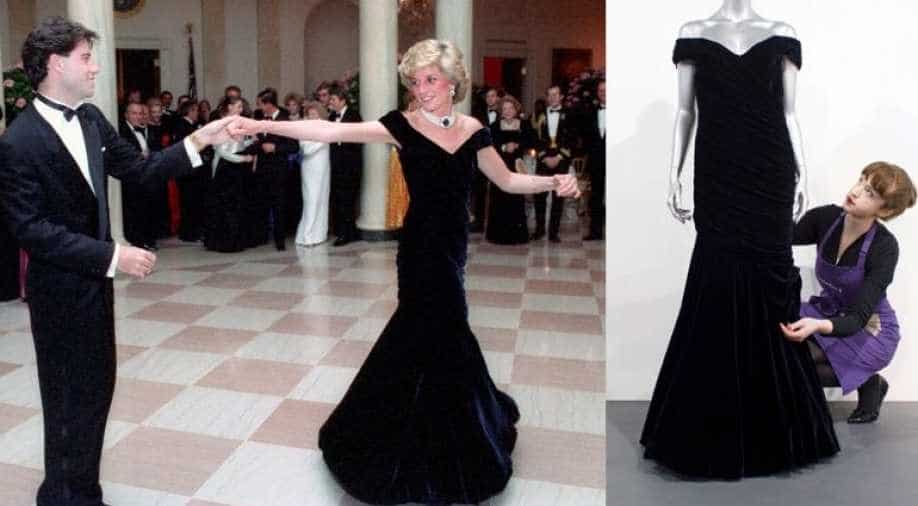 Dress Diana wore as she danced with Travolta Photograph:( Twitter )

Auctioneer Kerry Taylor said the gown had previously been bought in 2013 for 200,000 pounds "by a romantic gentleman who wanted basically to cheer up his wife".

A sweeping gown Princess Diana wore when she danced with John Travolta at the White House has been bought for more than $280,000 by the charity that looks after her former palace.

It failed to reach those figures during live bidding, but the charity moved in afterwards.

"It was sold post-auction ... for a hammer price of 220,000 pounds. The seller was delighted as he hoped it would stay in the UK," the auction house said in a statement.

The charity Historic Royal Palaces - which looks after Hampton Court Palace and the Tower of London as well as the public parts of Diana's former home, Kensington Palace - said on Wednesday it had bought a piece of history.

"Not only is the ‘Travolta’ dress a fantastic example of couture tailoring designed to dazzle on a state occasion, it represents a key moment in the story of twentieth-century royal fashion," Eleri Lynn, curator at Historic Royal Palaces, said in a statement.

"We’re delighted to have acquired this iconic evening gown for the Royal Ceremonial Dress Collection - a designated collection of national and international importance - over twenty years since it first left Kensington Palace," she added.

Diana wore the dress in 1985 at a White House state dinner, where she danced with the "Grease" actor.

Auctioneer Kerry Taylor said the gown had previously been bought in 2013 for 200,000 pounds "by a romantic gentleman who wanted basically to cheer up his wife".

"But since then it’s spent most of its time locked away in a wardrobe and now as a couple, they feel they really want this to go out into the public domain.”