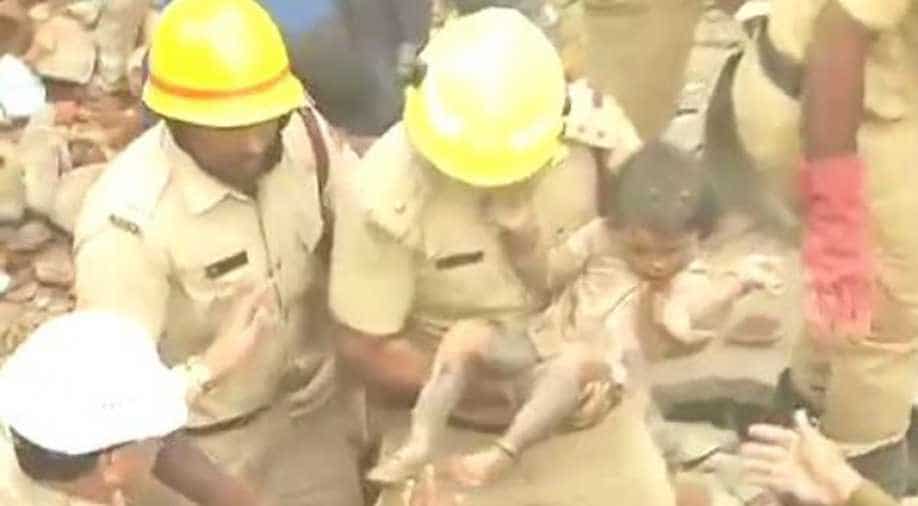 Portions of four buildings had collapsed in the city Ejipura's area on Monday.? Photograph:( ANI )

The Karnataka government will adopt the girl child rescued from the Bengaluru building collapse on Monday.

The girl's parents had died in the collapse.

Watch video of the rescue below:

#WATCH: Girl child rescued from Ejipura building collapse site in Bengaluru. Her parents died in the incident,govt has decided to adopt her. pic.twitter.com/jZcI1VHAf5

Bengaluru Development Minister KJ George said the government would adopt the girl, and take care of all her expenses.

Government will adopt the girl (whose parents died) who was rescued and will take care of all her expenses: Bengaluru Development Minister pic.twitter.com/CkV6qd9Ue7

He had earlier announced compensation of Rs 5 lakh for the next of kin of each of the deceased and Rs 50,000 each for the injured.

A total of seven people have died so far.

Rescue operations are on with a number of people feared trapped in the rubble.

Portions of four buildings had collapsed in the city Ejipura's area on Monday.

It was first thought a cylinder blast had caused the collapse but the Karnataka home minister Ramalinga Reddy seemed to refute the theory.

Cylinders on both ground & first floor had no gas in them so it is unlikely that the buildings collapsed due to blast: K'taka Home Minister pic.twitter.com/X5wTZfutQQ