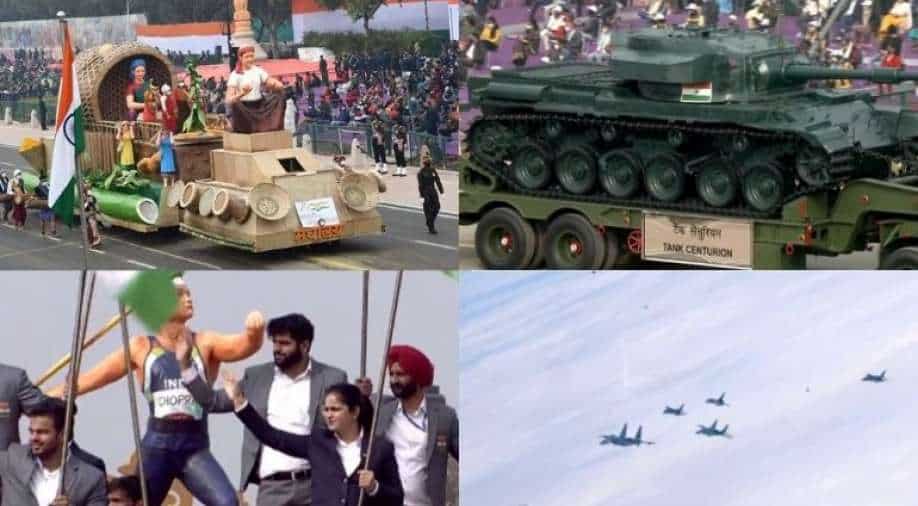 India will celebrate its 73rd Republic Day today. The celebrations will kick off at Rajpat with colourful tableaus and march past by the Indian defence forces followed by a flypast in the end by the Indian Air Force. India's President Ram Nath Kovind and Prime Minister Narendra Modi will be present at the ceremony as India's showcases its technological, cultural and economic strength.

On the eve of India's Republic Day, the Indian government announced the Padma Bhushan awards to be given to  Google CEO Sundar Pichai and Microsoft CEO Satya Nadella including several other people. The awards were also given to India's first Chief of Defence Staff, General Bipin Rawat who died in a helicopter accident last month and the former Uttar Pradesh chief minister late Kalyan Singh.

The Parachute Regiment of the Indian Army donned the new combat uniform during the Republic Day 2022 parade on Wednesday.

During the parade, the Parachute Regiment which is an airborne and special forces regiment was carrying the latest Tavor assault rifles. 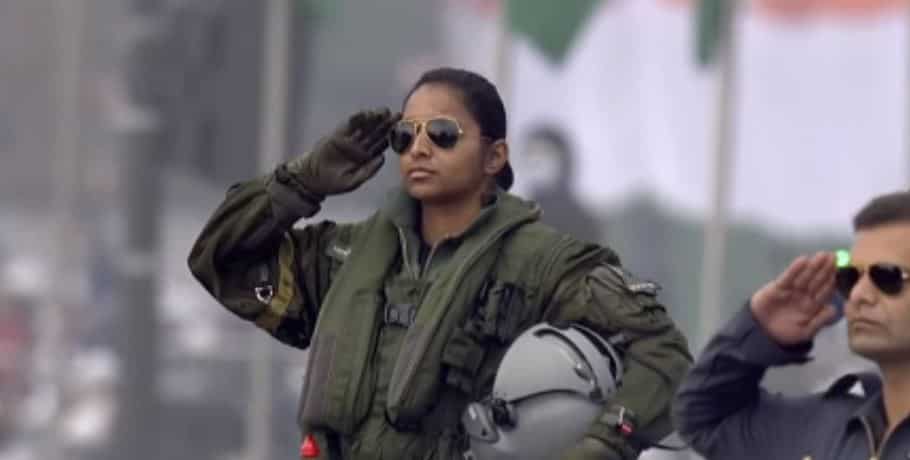 Flight Lieutenant Shivangi Singh is from Varanasi city in Uttar Pradesh state and joined the IAF in 2017. She flew the MiG-21 Bison fighter aircraft before flying the Rafale.

Rafale jets in the air during India's Republic Day celebrations at Rajpath. 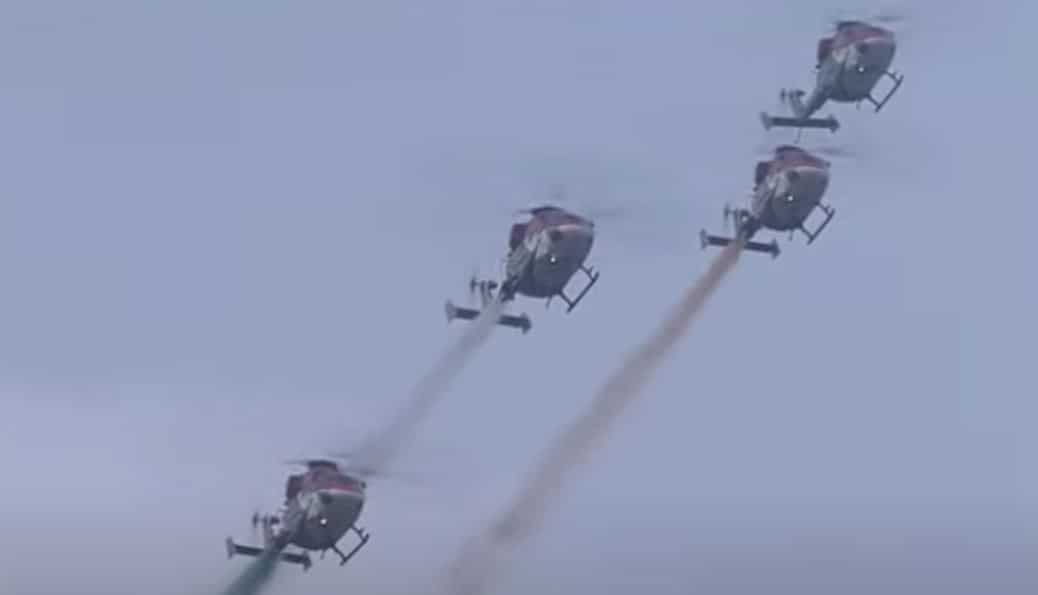 Tableau of Haryana at Republic Day 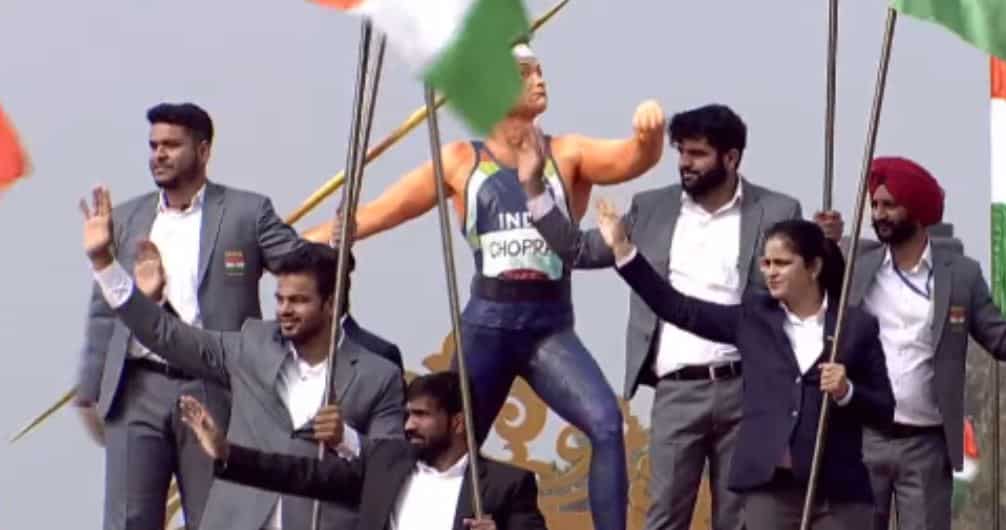 The tableau of Haryana participates in the  Republic Day parade under the theme : "number one in sports".

Goa tableau participates in the Republic Day parade at the Rajpath.

The tableau is based on the theme "symbols of Goan heritage". 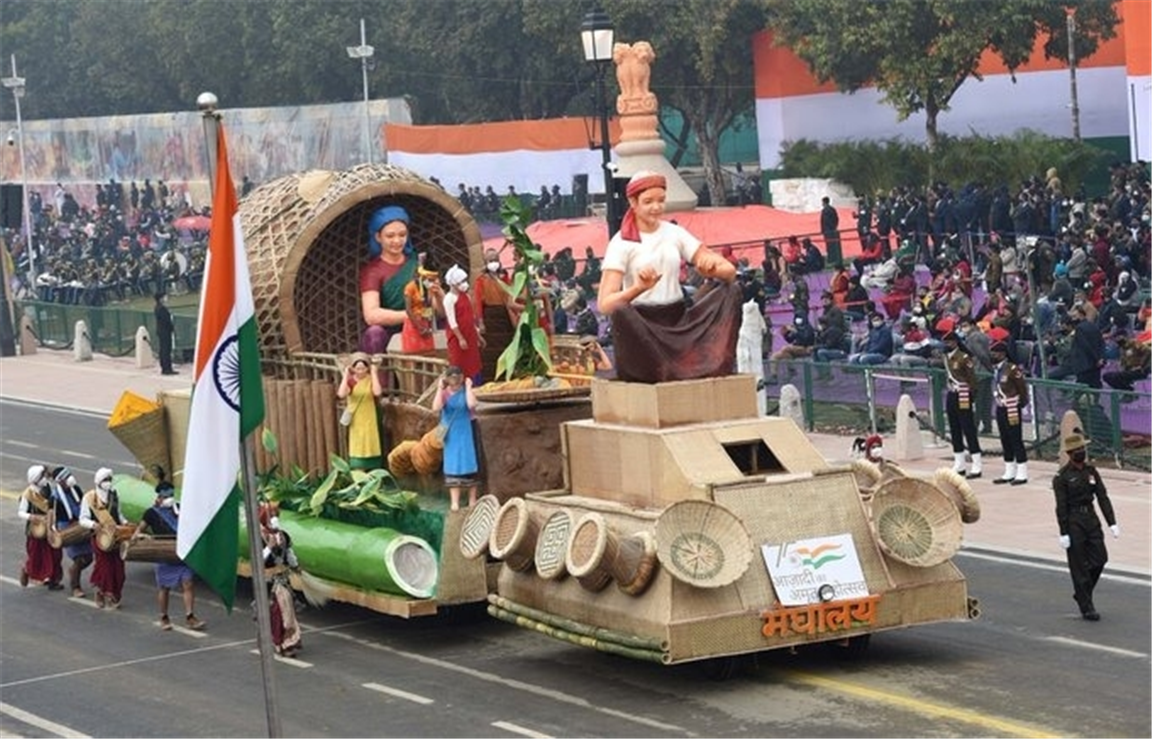 Meghalaya's tableau shows a woman weaving a bamboo basket and the many bamboo and cane products of the state. 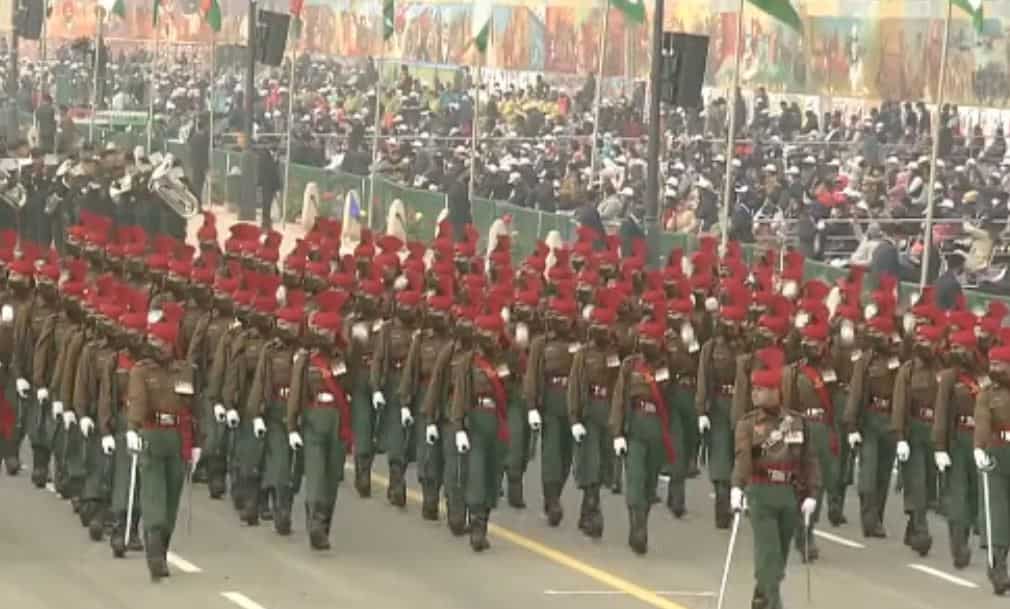 The contingent of J&K Light Infantry led by Maj Ritesh Tiwari of 5th Battalion of JAK LI marched down the Rajpath during Republic Day celebrations.

The contingent was attired in the Indian Army uniform of 1970s and carrying 7.62mm SLR weapons.

The Assam Regiment joined the march at the Rajpath on Republic Day. 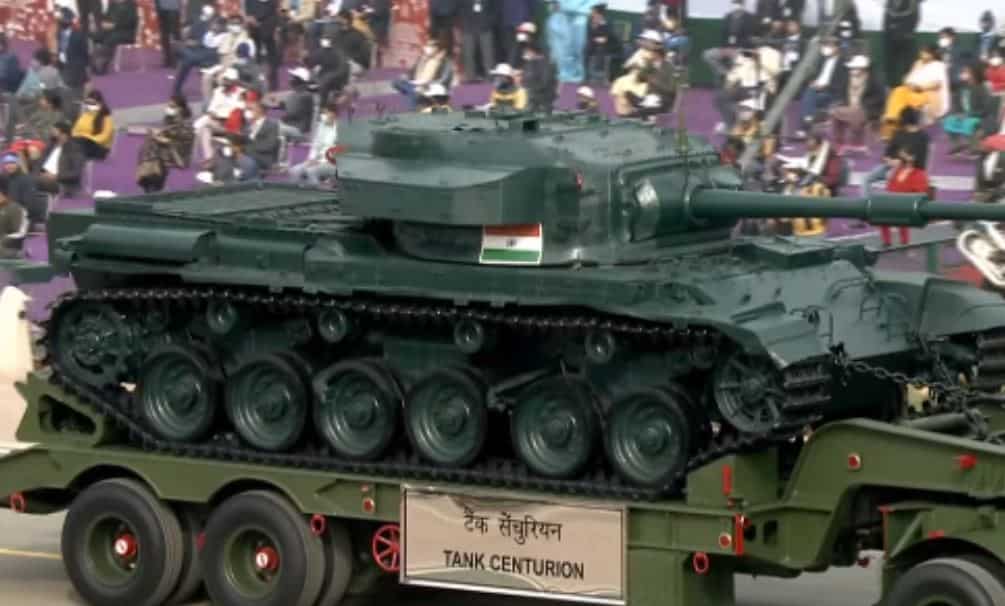 The Indian Army showcased the Pack Howitzer MK-I indigenously developed gun system during the Republic Day parade at the Rajpath. 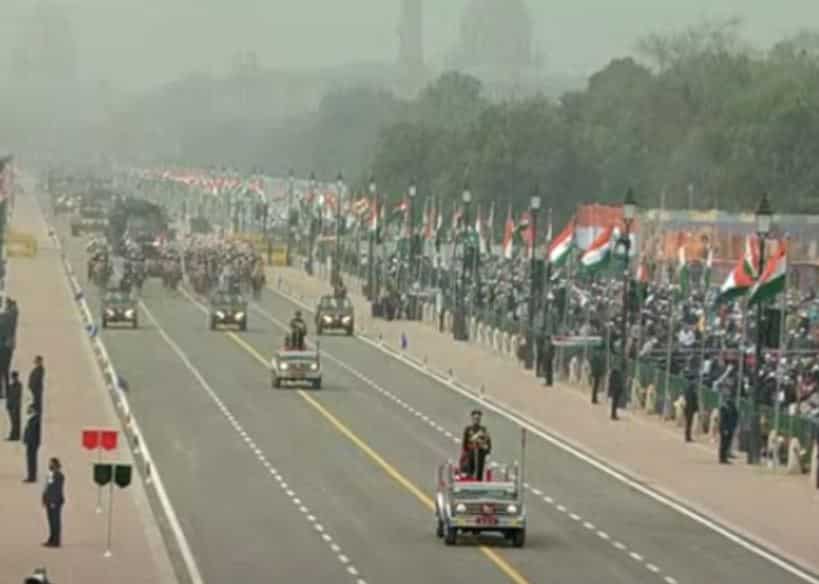 Before reaching Rajpath, Prime Minister Narendra Modi paid homage at the National War Memorial, a monument to the soldiers who have made supreme sacrifice for the country on Republic Day.

PM Modi was joined by defence minister Rajnath Singh and the three service chiefs as he paid tributes at a solemn ceremony.

Republic Day events commence with the homage ceremony at the war memorial.

India's President Ram Nath Kovind has arrived at the Rajpath with the parade set to start at 10:30am.

India's PM Narendra Modi has also arrived at the venue.

Ahead of India's Republic Day parade at the Rajpath on Wednesday, the White House greeted the people of India.

"As President (Joe) Biden said when India's Prime Minister (Narendra) Modi visited the White House last September, the relationship between India and the United States is destined to be stronger, closer and tighter, and it can benefit the whole world," Psaki added.

Happy 73rd Republic Day India! As millions of Indians celebrate their vibrant Constitution today, we are reminded of our nations' shared democratic values and the strength of the U.S.-India strategic partnership. 🇺🇸🇮🇳

In a tweet, the US State Department's South and Central Asia Bureau said: "Happy 73rd Republic Day India! As millions of Indians celebrate their vibrant Constitution today, we are reminded of our nations' shared democratic values and the strength of the US-India strategic partnership."

India will be showing its latest weapons including IAF jets and helicopters as Indian armed forces members take part in the Republic Day celebrations today.

There will be six marching contingents of the Indian Army on display including the Rajput Regiment and Assam Regiment and 17 military bands during the Republic Day parade.

There will also be two motorcycle formations including a woman's team.

On the eve of Republic Day, Indian President Ram Nath Kovind addressed the nation as he said, "In this 75th year of Independence, let us re-discover the values that animated our glorious national movement."

India's capital New Delhi has been brought under heavy security cover as the city police have intensified patrolling and sealed the borders. They have made coordination with its counterparts from the neighbouring states amid a terror alert by intelligence agencies.

Over 27,000 police personnel have been deployed on Republic Day security duties in Delhi and anti-terror measures have been intensified.

The Indo-Tibetan Border Police have played a pivotal role in guarding India's border along the LAC amid tensions with China since May 2020.

#RepublicDay | India is all set to witness its largest flypast by its airforce during the #RepublicDayParade. 75 aircraft from the Indian Airforce, Army and the Navy will take part showcasing India's military might.@SehgalRahesha tells you more pic.twitter.com/DRmlCZck4Y

India's Prime Minister Narendra Modi on Wednesday greeted the people on the occasion of Republic Day.

India is observing its 73rd Republic Day, the day its constitution came into force.

PM Modi in a tweet said: "Wishing you all a happy Republic Day. Jai Hind!"

Wishing you all a happy Republic Day. Jai Hind! #RepublicDay

The parade at Rajpath will start at 10:3am(IST) today

The parade at Rajpath will start at 10:30am (IST) today. The will be 25 tableaus of various states at the parade.

The Indian Army will be showcasing its PT-76 tank including Dhanush howitzers and electronic warfare system.

75 IAF jets will take part in the flypast at the end of the Republic Day celebrations.

Indian security forces have been put on high alert amid Republic Day celebrations in New Delhi on Wednesday.

Ahead of India's 73rd Republic Day celebrations, the country's Border Security Force IG DK Boora said that the forces have received some input, adding that they are on high alert. He further assured the nation that there is nothing to fear.

For the first time, on January 26, a National Legal Services Authority (NALSA) tableau depicting Lok Adalat will take part in the Republic Day procession on Rajpath.

The topic of the Law Ministry's float is "Ek Mutthi Aasman (Inclusive Legal System): Lok Adalat," according to officials.

According to them, the front half of the tableau features 'Nyay Sbke Liye,' a hand gesture representing bravery, assurance, and protection.

India's golden hero Neeraj Chopra will be honoured with the Padma Shri after his heroic performance at the biggest stage of them all last year.

Chopra had become the first athlete from the country to win a gold medal in track and field after finishing on top of the podium in the final of men's javelin throw at the Tokyo Olympics 2020.

He will be among the six sportspersons who will be conferred with the Padma Shri Award, India's fourth-highest civilian honour.

People attending the Republic Day parade must be fully vaccinated against COVID-19 and children below 15 years of age will not be allowed to attend the function, a set of guidelines issued by the Delhi Police stated.

There will be six marching contingents of the Indian Army on display including the Rajput Regiment and Assam Regiment and 17 military bands during the Republic Day parade.

There will also be two motorcycle formations including a woman's team.

India announced Padma Bhushan, its third-highest civilian award for Google CEO Sundar Pichai and Microsoft CEO Satya Nadella. Both tech bosses are of Indian origin. The announcement was made on the eve of India's Republic Day.