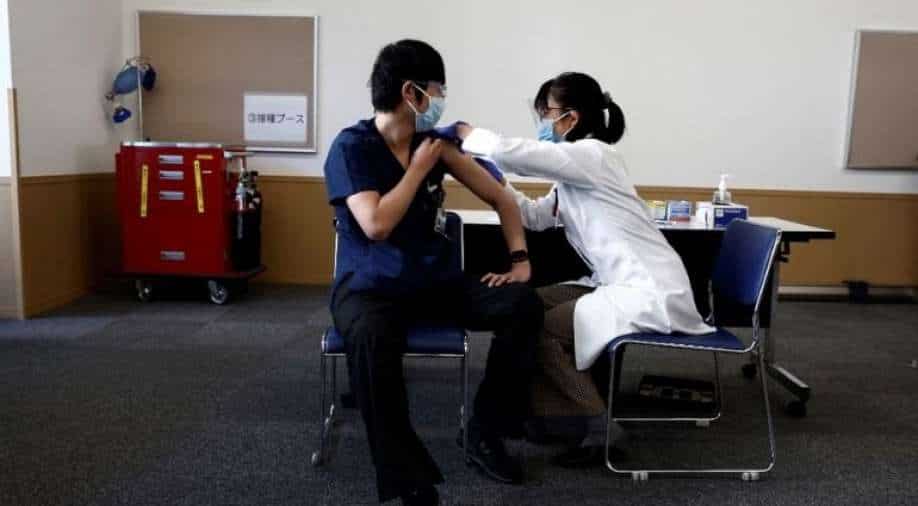 Japan kicked off its inoculation drive at a Tokyo hospital, with a plan to initially give Pfizer-BioNTech shots to 40,000 healthcare workers

Japan launched its coronavirus vaccination programme on Wednesday, five months ahead of the Tokyo Olympics, as the World Health Organization reported a fall in new cases around the world.

The same day, Australia and New Zealand ended snap lockdowns after they successfully brought small outbreaks under control in just days -- suggesting that despite their unpopularity, movement restrictions remain vital tools against the pandemic.

Japan kicked off its inoculation drive at a Tokyo hospital, with a plan to initially give Pfizer-BioNTech shots to 40,000 healthcare workers.

"Hopefully vaccinations... can change the situation here," nurse Rino Yoshida told national broadcaster NHK after she got one of the first shots.

Japan is battling a much more limited outbreak compared with hard-hit countries such as the United States and Britain, but its response is being closely watched around the world as doubts swirl over the postponed Tokyo Olympics, due to start July 23.

Organisers have outlined measures they say will keep the Games safe even without requiring participants to be vaccinated or quarantined on arrival.

But there are fears among the Japanese public and experts that the precautions may not be enough for a global event, even as the WHO on Tuesday reported a slowing of the pandemic.

New infections worldwide fell by 16 per cent last week, while the number of new deaths also dropped 10 per cent week-on-week, based on figures up to Sunday.

"The fire is not out, but we have reduced its size," WHO director-general Tedros Adhanom Ghebreyesus said Monday.

With infections topping 109 million and more than 2.4 million deaths, the pandemic has devastated the global economy, and populations are growing increasingly frustrated with financially painful restrictions that authorities and experts say are necessary to fight the virus.

Among the countries that have successfully deployed such measures is Australia, where stay-at-home measures for six million people in Victoria state were to be lifted late Wednesday after a snap five-day lockdown brought an outbreak under control.

"If we had been open throughout this outbreak... total case numbers would be much, much higher and it is a certainty that I would not be reporting zero cases today," said Victoria Premier Daniel Andrews.

Neighbouring New Zealand, widely praised for its Covid-19 strategy, also ended a snap lockdown it had imposed from Monday in its largest city Auckland after three community cases emerged.

These measures sharply contrast with Europe, where restrictions have been less rigorous through the pandemic, and tightening them has often been politically difficult.

The Dutch government's nationwide curfew survived a bitter legal challenge on Tuesday, from an anti-restrictions group that promotes baseless conspiracy theories about the pandemic.

'Not safe until everyone is safe'

Frustration and rancour have not been limited to restrictions though, with poorer nations and the WHO warning against wealthy countries dominating vaccine supplies.

President Joe Biden told a CNN town hall Tuesday that the United States -- the worst-hit nation in the world -- would have "600 million doses, enough to vaccinate every American".

Mexico's Foreign Minister Marcelo Ebrard had earlier said his government would complain to the United Nations about hoarding and inequality in the global inoculation drive.

And Nigeria's Ngozi Okonjo-Iweala, the new head of the World Trade Organization, said the body can help ensure universal access to the jabs.

"It's really in the self-interest of every country to see everyone vaccinated because you're not safe until everyone is safe," she told AFP in an interview.

Mass inoculation projects have been made more complicated with the emergence of new coronavirus variants, raising concerns about the efficacy of vaccines against them.

India confirmed Tuesday it had detected four cases of the more contagious variant first detected in South Africa, which has spread to many countries.

"The virus has evolved and will continue to evolve," she said.

"It is important we prepare for mutations."