With 7 T20Is in June, SRH fast bowler Umran Malik will be in India selection committee's radar 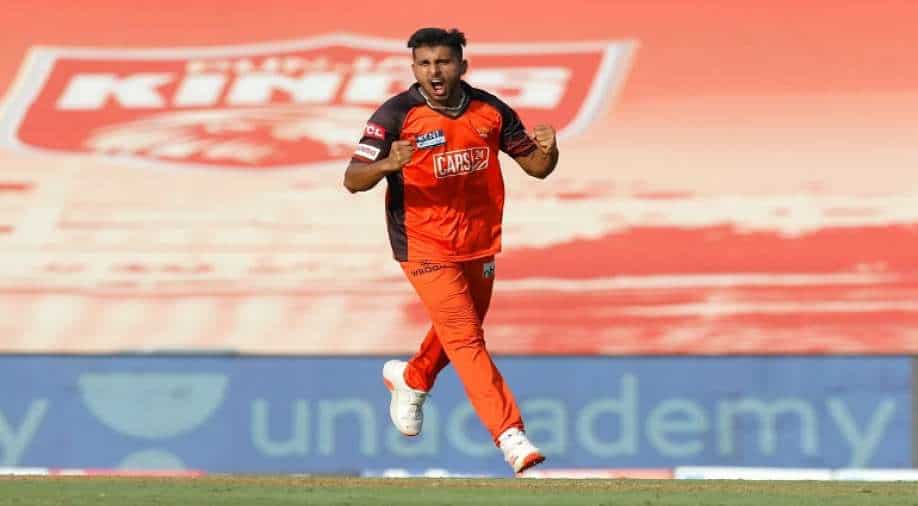 Umran, with his scorching pace, has a high probability of making it to the squad if all goes well and he remains fit over the next two months.

Pace bowling sensation Umran Malik could be fast-tracked into the Indian team as early as June when it will play seven T20 Internationals against South Africa and Ireland respectively.

India will play South Africa in a five-match T20 International series at home (June 9, 12, 14, 17, 20) and two matches in Ireland's Malahide (June 26, 28) where a second-string team comprising white-ball specialists will be plying their trade as the big guns prepare for the series-deciding fifth Test against England, starting early July.

Umran was a net bowler during India's last World T20 campaign in the UAE.

Umran, with his scorching pace, has a high probability of making it to the squad if all goes well and he remains fit over the next two months.

The three bowlers from the fringe pack, who might get a go in some of the 20 plus T20I matches in the run-up to the World Cup are Umran and left-armers T Natarajan and Arshdeep Singh, all of whom have been impressive in the IPL.

"My job with Umran is to ensure he runs fast and make players play differently. My job is to try and make him forward-thinking as to what the batters are planning on doing.

"It's exciting for us to sit back and watch what a genius he is. I don't want to turn him into what I was, all I want is his geniuses to come out," Steyn said on 'Star Sports' 'Cricket Live' programme.

It is understood that chairman of selectors Chetan Sharma and his committee will be keeping a close eye on Umran, who is now India's fastest bowler by a distance, regularly clocking 152 plus (approx 95 miles/hr).

He has nine wickets from six games for SRH this season and the manner in which he intimidated an established international batter like KKR's Shreyas Iyer was an exhilarating sight.

Sunil Gavaskar, commentating for the IPL broadcasters, said that Malik will become more lethal once he is able to stop spraying deliveries on leg-stump and wide off it.

"A lot of guys who bowl at that speed tend to spray the ball around but Umran bowls very few wide deliveries. If he can control the wides down the leg side, he will be a tremendous bowler because that will mean he'll be attacking the stumps all the time, and with his pace, it's not easy to hit straight.

"If he bowls wicket-to-wicket, he's going to be pretty much an unplayable bowler. He's going to play for India," Gavaskar said.

Former opener WV Raman, one of the most respected voices in Indian cricket, feels that time is ripe for Umran to be drafted into the Team India set-up straightaway.

"He is a special talent. He has pace and now he is slowly picking up the ropes of fast bowling. When a young bowler has pace, don't wait for three seasons before you blood him.

"If he is young and as quick as Umran is, you should seriously look at him," Raman, who has been a former NCA batting coach, apart from working with KKR and the Indian women's team, told PTI.

"When Umran is bowling, you could hear that the ball is hitting the bat. But also when you have a bowler like that bowling at 150 consistently, then you also need good slip catchers as the ball will travel at quite a speed," Raman added.

Raman also analysed that when it comes to express pace bowlers, they have a better chance of making their international debut much earlier compared to batters, who are doing well in IPL.

"If you look at our batting unit, we have a lot of experience and if you are an uncapped player making a mark as a specialist batter within No. 4, it is a bit difficult to get a look-in. After that you have multi-dimensional cricketers coming in.

"Also you will produce more quality batters than bowlers. Therefore when a special bowler comes in the horizon, he is bound to create a certain degree of interest," Raman explained.

Former selector Devang Gandhi, however, feels that raw pace can be counter-productive as batters at international level can score quick runs.

"I believe that India will bank on experience going into the World Cup considering that Australian pitches for the ICC tourney will be great for batting.

"But having said that, in the run-up to the World T20 you can check out on various options and there is no harm if they decide to try out Umran and see what he can bring to the table," Gandhi, a member of the last selection committee, said.