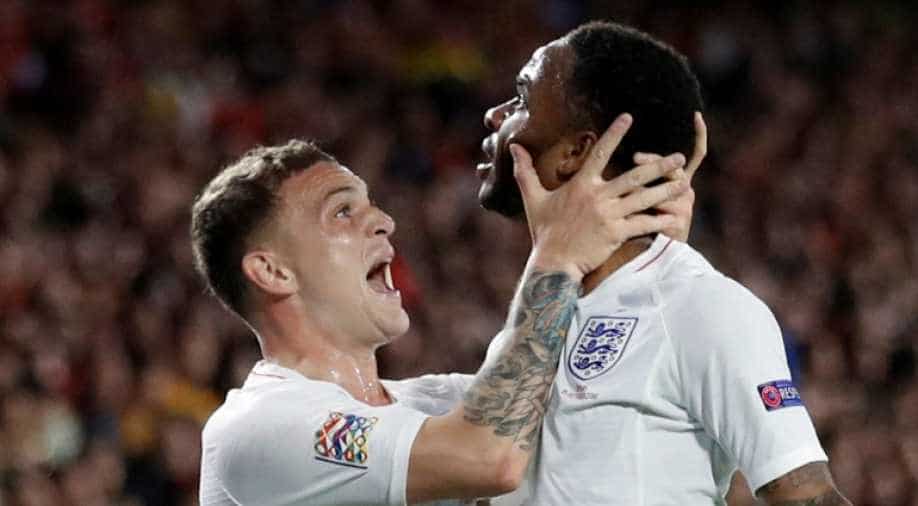 Raheem Sterling struck twice as England defeated Spain 3-2 in the UEFA Nations League on Monday. It was England's first victory on Spanish soil in the last 31 years.

Roughly 2,500 England supporters were among the more than 50,000 people in the stands at Seville's Benito Villamarin stadium to see the Three Lions deliver their best performance so far in the inaugural edition of the tournament.

While the players couldn't wait to revel on social media after their terrific win, here is how they reacted:

Captain Harry Kane posted a picture of himself on Instagram celebrating with teammates above the caption: "Big performance from the boys. Good pressing, clinical in front of goal and dug in."

Big performance from the boys. Good pressing, clinical in front of goal and dug in. 👌 #ThreeLions #England 🦁🦁🦁

Kane's Tottenham Hotspur team-mate Kieran Trippier, who also played, opted for a photograph of himself with man of the match Raheem Sterling, scorer of two of England's goals.

"That was a huge performance and a memorable night @England," Trippier wrote along with three lion emojis.

That was a huge performance and a memorable night @England 🦁🦁🦁

Manchester City forward Sterling, whose opening goal was his first for England in three years, posted pictures of himself celebrating his two strikes which came either side of a goal from Marcus Rashford.

"What an away team performance, against a very good Spain team... +3points !!," the 23-year-old wrote, which was quickly liked by Kane, Trippier and fellow starter Harry Winks.

What an away team performance, against a very good Spain team 🦁🦁🦁 +3points !!

Rashford, who was set up for his goal by his captain, wrote underneath a picture of the frontline pair: "Link up like we've been working on in training @harrykane, great assist #threelions."

Link up we’ve been working on in training @harrykane, great assist 🙌🏾 #ThreeLions

Liverpool defender Joe Gomez, after just his second start for the national team, paid tribute to the fans who made the trip to the Estadio Benito Villamarin and endured a nervy climax as Spain laid siege to England's goal in the dying minutes.

Great win tonight away against a top team... thanks for all the support kept us going till the very end 🦁🦁🦁

"Great win tonight away against a top team... thanks for all the support kept us going till the very end," he wrote with a picture of the team lined up before the match.

Aside from being a milestone win against one of the world's top teams, the victory also turns around England's fortunes in Group 4 of League A and gives them a chance of reaching the Nations League Finals next year.

Spain still lead the group with six points after three games, while Gareth Southgate's side are second on four, leaving Croatia bottom with one point although the World Cup runners-up have a game in hand.