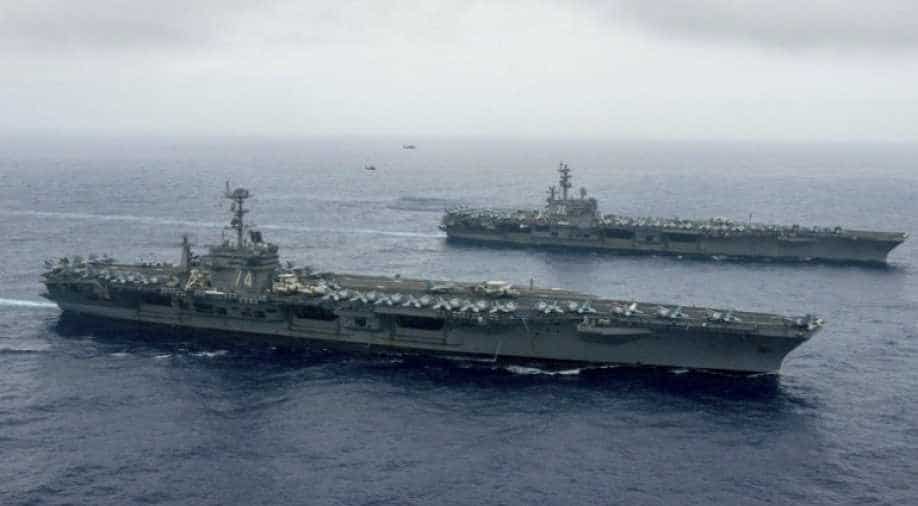 US carriers in East Asia for war drills Photograph:( Reuters )

USS Ronald Reagan and the USS John C Stennis deployed from the US West coast, are carrying out air, surface and anti-submarine warfare operations.

Two US aircraft carriers with around 150 fighter jets are conducting "complex" warfare drills in the Philippine Sea, the US Navy said on Thursday, in a show of force in waters south of China and within striking distance of North Korea.

The two carriers, the Japan-based USS Ronald Reagan and the USS John C Stennis deployed from the US West coast, are carrying out air, surface and anti-submarine warfare operations, the US Seventh Fleet said in a news release.

The US Navy has conducted such operations before, including drills by three carriers last year as tensions with North Korea escalated.

The latest, which coincides with US vice president Mike Pence's visit to the region, comes as denuclearisation talks with North Korea show little sign of progress and amid a tit-for-tat trade spat with China.

The USS Reagan also took part in the biggest war games ever staged in and around Japan this month, involving dozens of US and Japanese ships, hundreds of aircraft and thousands of military personnel.