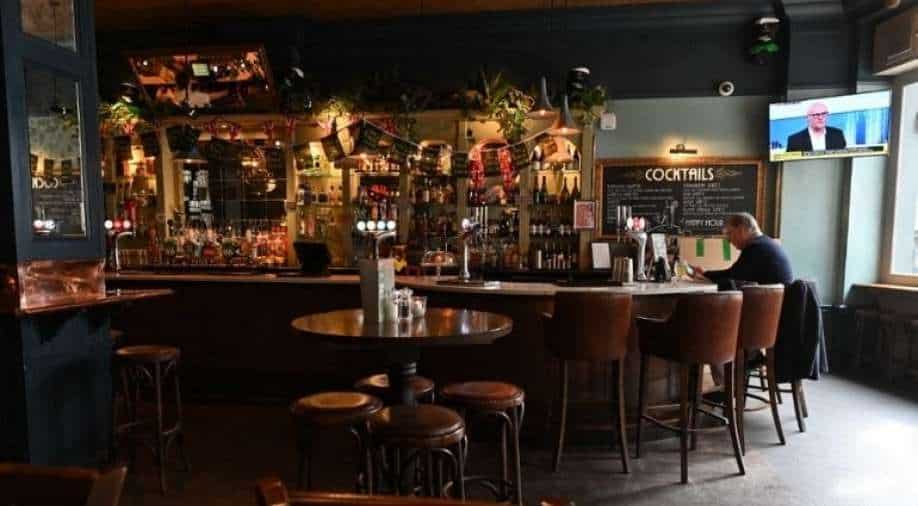 A single customer sits at the bar in a near-empty pub in central London on March 17, 2020 Photograph:(AFP)
Follow Us

For the last month, they have only been allowed to serve food and drinks outside, making indoors an attractive option for punters who have shivered during an exceptionally cold spring

Pub and restaurant owners across England will breathe a sigh of relief on Monday, as months of coronavirus restrictions are lifted, allowing them to serve groups of six or two households inside.

For the last month, they have only been allowed to serve food and drinks outside, making indoors an attractive option for punters who have shivered during an exceptionally cold spring.

"I can't wait," said James Berridge, a television director. "When restaurants and pubs and clubs will really open, we're going to be there, indoors.

"On a beautiful day... it's fine outdoors. We're in the UK. As soon as it rains, we need to be inside, by the fire, having a pint."

But just days before the long-expected reopening, Polina Minkova, the manager of The Guildford Arms in southeast London, has been struggling with a major problem.

"It has been very difficult to get staff," she told AFP. Qualified, experienced workers, in particular, are in short supply, including for senior positions in the kitchens.

Monday is a major step in the reopening of the badly hit hospitality and leisure sectors, with museums, hotels and sports stadiums all expected to welcome back visitors.

A marked decline in Covid cases, driven by months of strict measures to curb the spread of the coronavirus, and a successful vaccination campaign, has allowed the move.

The situation at The Guildford Arms, in upmarket Greenwich, is being played out across the sector, according to the British Beer and Pub Association, an industry body.

Chief executive Emma McClarkin, whose organisation represents 20,000 pubs, said it was a "challenge" to make sure staff have "the right skill sets that we need to reopen fully".

The pool of available staff has been reduced by ongoing coronavirus furlough schemes and by hospitality workers who have left the sector for jobs considered more stable.

Pubs, restaurants and cafes have also been hit by the departure of EU nationals from Britain, a phenomenon that started during Brexit and accelerated during the pandemic.

European nationals accounted for 12.3 per cent to 23.7 per cent of the workforce in 2017, before the UK's departure from the bloc, according to consultancy firm KPMG.

Britain's Office for Statistics has said the hotel and restaurant sector has been the hardest hit by the pandemic: 355,000 salaried jobs have been lost in one year since March 2020.

"What employers in the sector are telling us is that between 10 and 20 per cent on average of their people who've been on furlough are deciding not to return," Kathy Dyball, director of the specialist recruitment site Caterer.com told AFP.

Her site had seen a steep rise in adverts seeking new employees, a sign of a worsening situation for the hospitality sector which she said had suffered from understaffing for "decades".

'A lot of competition'

Chefs have been among those in the highest demand, pushing up salaries.

Carol Cairnes, head of human resources at D&D London which owns some 40 high-end restaurants in the UK, said there had been "a lot of competition out there to get the best candidates".

As she looks for between 250 to 300 additional staff in addition to the 1,400 positions across the business, Cairnes said she had seen an increase in British candidates and applicants with less experience looking for positions after Brexit.

"We've a lot of enquiries from overseas from people," Cairnes said. "We're not able to bring them over," she added, citing post-Brexit immigration rules.

The problem for hospitality has become all the more pressing as the sector looks to meet demand from customers who are keen to return to indoor dining.

By July, the McMullen pub chain plans to open new locations and hire 400 people in addition to the roughly 1,600 staff it currently employs.

The chain's joint managing director, Heydon Mizon, said while staffing would not be an obstacle to reopening next week, it could be a problem as the restaurants get busier.

"We expect it to be quite busy in June and July," he said, explaining at current staffing levels his teams would "have to work more hours and we don't want that".