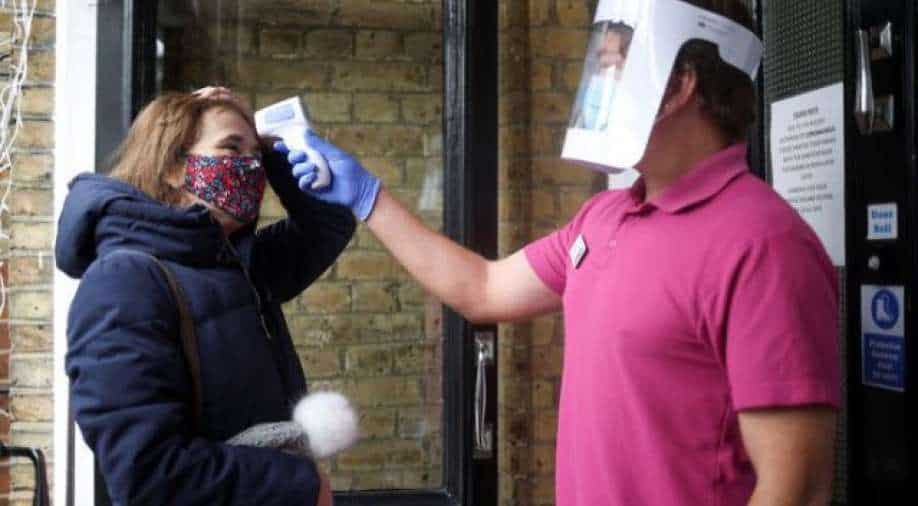 Britain said late Monday it had hit a target to offer a coronavirus vaccine first dose to all over-50s by mid-April, as England's lockdown-weary population toasted a significant easing of restrictions with pints and much-needed haircuts.

Prime Minister Boris Johnson said the UK had passed "another hugely significant milestone" after confirming a jab had been offered to all over-50s, the clinically vulnerable and health and social care workers, ahead of a self-imposed April 15 deadline.

"That means more than 32 million people have been given the precious protection vaccines provide against Covid 19," he said in a statement, adding efforts would now focus on delivering second doses and offering all adults an initial shot by August.

The British leader had earlier hailed the latest lifting of rules as "a major step forward in our roadmap to freedom", after pubs were allowed to reopen to serve drinkers outside and non-essential retailers and hairdressers restarted.

Some pubs, many shuttered for large chunks of the last year, wasted no time and opened on the stroke of midnight, while others opened just in time for breakfast.

"I work the night shifts in the hospital," said Richard Newman, a 32-year-old doctor at the Royal London Hospital, as he waited with friends outside the Half Moon pub in east London at nine am (0700 GMT).

"Hopefully, it's the end of lockdown but who knows? What does it represent? Hopefully a nice summer. It should be fun, bringing back a bit of life to London."

Bundled up in coats and hats, customers sat chatting and laughing at outside tables, ordering beers, wine and full English breakfasts of eggs, bacon and sausages.

"For the past few months we've never been able to go out together, celebrate and get through it," said 28-year-old Laura Bennett.

Zoos, gyms and swimmers
On London's Oxford Street, some shoppers braved the chilly temperatures to start queueing at 5.30 a.m., two hours before the first non-essential shops such as fast-fashion chain Primark opened.

Hairdressers were also able to open for business, with demand for much-needed trims high more than three months after the latest stay-at-home order began.

In east London, Adam Yours waited outside Jimmy Slicks barber's, desperate to lose his long hair.

"The first thing on the list is to get a haircut so you can go to the pub and look respectable," said the 22-year-old.

Johnson had his unruly mop of blond hair cut, his spokesman told reporters.

As sports and leisure facilities reopened in England, people plunged into pools and lifted weights.

Self-catering domestic holidays are also allowed and bookings have soared.

Mosques are meanwhile preparing for the start of Ramadan this week, a year after the Muslim holy month was observed without traditional community gatherings.

Watchword: caution
The UK nations all have different strategies for leaving lockdown, and Monday's pub reopenings applied only to England, while non-essential shops also reopened in Wales.

Government ministers, scientists and health officials are warning against complacency, despite the successful vaccine drive which is seen as the main way to prevent more serious cases of Covid-19 that require hospital treatment.

In London, authorities are boosting testing in the southern districts of Wandsworth and Lambeth after at least 44 confirmed cases of the highly transmissible South African Covid variant were detected.

Although Britain recorded just 3,568 new infections Monday, it has seen more than 4.3 million cases since the pandemic began and over 127,000 deaths -- one of the worst tolls in the world.

Its economy has also been devastated by a year of repeated enforced closures and restrictions, prompting consideration of new measures to ensure businesses stay open in the future.

One possibility is so-called "vaccine passports" but that has triggered debate about whether they would be effective or enforced -- and implications for civil liberties.

There is also increasing pressure for a decision on resuming non-essential international travel, with many eager to book foreign holidays.

Johnson has said the reopening plan will be driven by data, not dates, but has set the next anticipated easing for May 17.

Almost all remaining social restrictions are scheduled to be lifted on June 21.