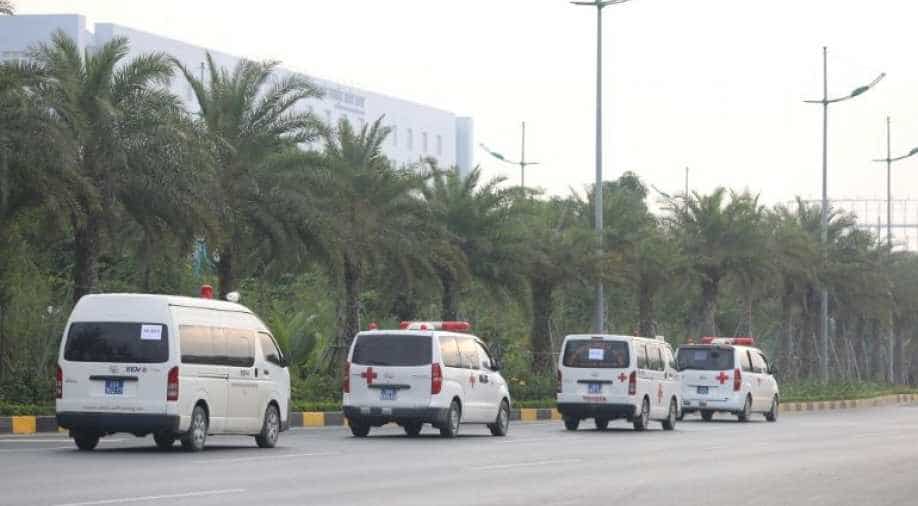 The first remains of the 39 people found dead in a truck in Britain last month arrived in Vietnam early Wednesday, an airport security source said.

The bodies arrived on a commercial Vietnam Airlines flight from London to Hanoi, where ambulances and security personnel waited at the airport.

"The plane landed with 16 bodies on board... we are waiting to transfer the bodies to local authorities," the source told AFP, speaking on condition of anonymity.

An official letter seen by AFP confirmed that 16 bodies would arrive in Vietnam Wednesday. The 16 victims came from three provinces in central Vietnam.

The other remains are expected to arrive in the coming days, though officials have not confirmed the date publicly.

Families have been frozen in grief for weeks waiting for their relatives' return, and many have taken out hefty loans from the government to cover the cost of repatriation.

The remains were expected to be delivered later Wednesday to relatives in three central provinces, Nghe An, Ha Tinh and Quang Binh, so families could hold funerals and burial ceremonies.

The bodies of 31 men and eight women were discovered in a refrigerated lorry in an industrial state in Essex east of London on October 23.

Police initially identified the victims as Chinese but families in Vietnam later came forward with fears their relatives were on the truck.

The United Kingdom is a top destination for Vietnamese illegal migrants.

Many arrange trips through brokers who promise them well-paid jobs and end up working in nail bars or on cannabis farms, deep in debt for their dangerous trips over.

Several families of the 39 victims told AFP they borrowed thousands of dollars to pay for their relatives' trips to Europe.

They are now further in debt having taken loans from the government to bring their relatives back.

Families were given two options for repatriation: $1,774 to bring back ashes, or $2,858 for the cost of a coffin carrying the body.

Though relatives were encouraged by authorities to opt for ashes "to ensure speed, low cost and sanitation safety", many paid more for the bodies to carry out traditional burials.

Cremation is rare in the Vietnam countryside, where many of the victims were from.

Most hailed from just a handful of central Vietnam provinces, which are among the poorest in the country and where well-entrenched networks of illegal brokers can easily facilitate risky trips abroad.

Ten of the victims were teenagers, including two 15-year-old boys, and 30 of the group came from Nghe An and Ha Tinh provinces.

They paid thousands of dollars to brokers who promised the truck was the safer option, billed as the 'VIP route', their families told AFP.

On Monday, the Northern Irish driver of the truck, 25-year-old Maurice Robinson, pleaded guilty to conspiring to assist illegal immigration.

He also admitted to acquiring the cash that came from criminal conduct but did not plead guilty to 41 other charges levelled against him.

Several other people have been arrested in the UK over the incident while Vietnam has held at least 10 people, though none have been formally charged.