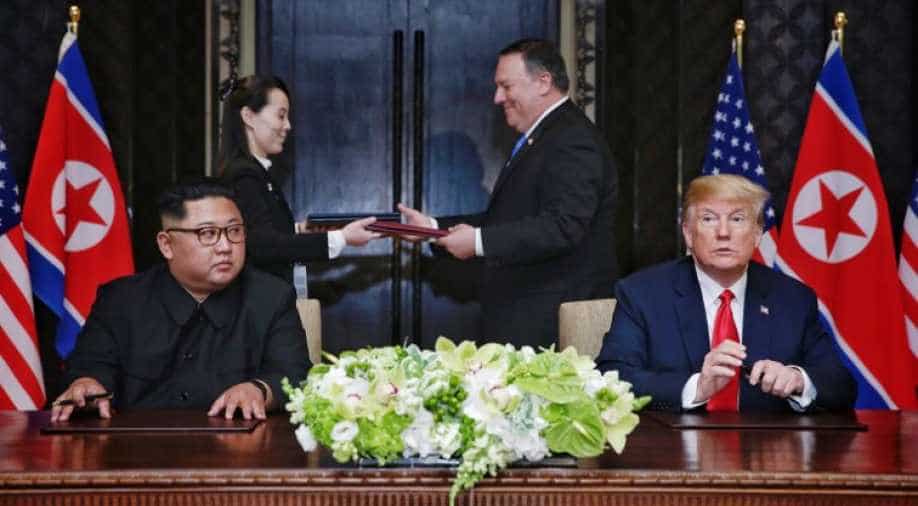 The North Koreans had arrived in Beijing and were expected to board a plane bound for the Vietnamese capital Hanoi, Yonhap said, with the high-stakes meeting now less than two weeks away.

The North Koreans had arrived in Beijing and were expected to board a plane bound for the Vietnamese capital Hanoi, Yonhap said, with the high-stakes meeting now less than two weeks away.

"A group of 12 North Koreans, including Kim Chang Son, were on the boarding list," Yonhap said, citing a source in the capital.

Kim Chang Son was part of the team overseeing protocol in the run-up to the first Trump-Kim summit and Yonhap said the delegation was expected to have discussions with US officials on the logistical preparations for the Hanoi meeting.

The identities of the 11 other officials were not reported.

Pyongyang has yet to provide any official confirmation of the Feb 27-28 summit, which will be the second time the two leaders come together following their June 12 Singapore meeting.

That produced a vaguely-worded document in which Kim pledged to work towards denuclearisation -- with no hard timeline agreed.

In preparation for Hanoi, US envoy for North Korea Stephen Biegun was last week in Pyongyang for three days of talks with officials.

Biegun said they had been productive, but more dialogue was needed.

"We have some hard work to do with the DPRK between now and then," Biegun said, adding that he was "confident that if both sides stay committed we can make real progress here".

The US State Department said talks during Biegun's trip explored Trump and Kim's "commitments of complete denuclearization, transforming US-DPRK relations and building a lasting peace on the Korean Peninsula".

Specifically, discussions on declaring an end to the 1950-53 Korean War could have been on the table, with Biegun last month saying Trump was "ready to end this war".

Earlier this week Vietnam's foreign minister Pham Binh Minh visited Pyongyang but no details on their discussions have been announced.

The commander of US forces in South Korea said earlier this week that he had seen "little to no verifiable change" in North Korea's military capabilities.

General Robert Abrams, the new head of US Forces Korea, said although the Singapore summit had helped dial down tensions on the Korean peninsula, it had not led to substantive changes.

North Korea, which holds most of the peninsula's mineral resources, was once wealthier than the South, but decades of mismanagement and the demise of its former paymaster, the Soviet Union, have left it deeply impoverished.

In 2017 the UN Security Council banned the North's main exports -- coal and other mineral resources, fisheries and textile products -- to cut off its access to hard currency in response to Pyongyang's pursuit of nuclear weapons and ballistic missiles.

Trump has said that North Korea will become a "great Economic Powerhouse" under Kim.