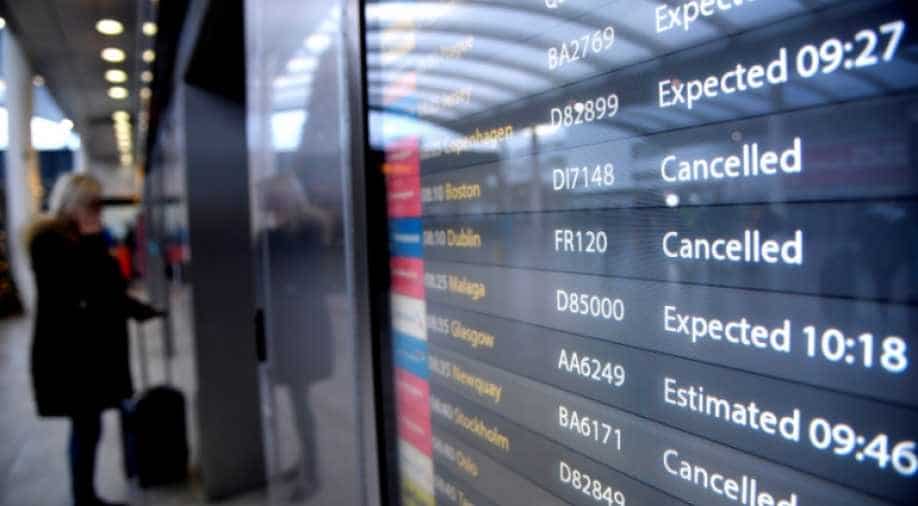 The airport briefly closed again on Friday to investigate a new drone sighting but was soon operating as normal.

London's Gatwick Airport reopened on Friday after a mystery saboteur wrought 36 hours of travel chaos for more than 100,000 Christmas travellers by using drones to play cat-and-mouse with police snipers and the army.

After the biggest disruption at Gatwick, Britain's second busiest airport, since a volcanic ash cloud in 2010, Gatwick said around 700 planes were due to take off on Friday, although there would still be delays and cancellations.

The airport briefly closed again on Friday to investigate a new drone sighting but was soon operating as normal.

"Flights have resumed," a spokeswoman said. "The military measures we have in place at the airport have provided us with reassurance necessary to re-open our airfield."

Britain deployed unidentified military technology to guard the airport against what transport minister Chris Grayling said were thought to be several drones. "This kind of incident is unprecedented anywhere in the world," he said.

The motivation of the drone operator, or operators, was unclear. Police said there was nothing to suggest the crippling of one of Europe's busiest airports was a terrorist attack.

Gatwick's drone nightmare is thought to be the most disruptive yet at a major airport and indicates a new vulnerability that will be scrutinised by security forces and airport operators across the world.

The army and police snipers were called in to hunt down the drones, thought to be an industrial-style craft, which flew near the airport every time authorities tried to reopen it on Thursday.

The perpetrator has not yet been detained but the police said they had a number of possible suspects. No group has claimed responsibility publicly and police said there was no evidence another state was involved.

Sussex Police Assistant Chief Constable Steve Barry said they were keeping an open mind about who was responsible.

"In terms of the motivation, there's a whole spectrum of possibilities, from the really high-end criminal behaviour that we've seen, all the way down to potentially, just individuals trying to be malicious, trying to disrupt the airport," he said.

After a boom in sales, unmanned aerial vehicles have become a growing menace at airports across the world. In Britain, the number of near misses between private drones and aircraft more than tripled between 2015 and 2017, with 92 incidents recorded last year.

The British Airline Pilots' Association (BALPA) said it understood "detection and tracking equipment" had been installed around Gatwick's perimeter.

BALPA said that it was extremely concerned at the risk of a drone collision. Flying drones within 1 km (0.6 mile) of a British airport boundary is punishable by five years in prison.

The defence ministry refused to comment on what technology was deployed but drone experts said airports needed to deploy specialist radar reinforced by thermal imaging technology to detect such unmanned flying vehicles.

Other ways to tackle them is typically by frequency jamming that can disable or disrupt control signals and the GPS signals that allow the drones to navigate.

The drone sightings caused misery for travellers, many sleeping on the airport floor as they searched for alternative routes to holidays and Christmas family gatherings.

Flights were halted at 2103 GMT on Wednesday after two drones were spotted near the airport. The disruption affected at least 120,000 people on Wednesday and Thursday but flights were restarted at 0614 GMT on Friday.

At 1740 GMT flights were suspended again but restarted in less than an hour.

It was not immediately clear what the financial impact would be on the main airlines operating from Gatwick including easyJet, British Airways and Norwegian.

Britain's Civil Aviation Authority said it considered the event to be an "extraordinary circumstance" meaning airlines are not obliged to pay compensation to affected passengers.

Airlines will have to refund customers who no longer wish to travel, however, and try to reschedule flights to get passengers to their destinations.

Some airport staff handed out chocolate and Christmas elf toys to stranded passengers.

Some, like Sarah Garghan-Watson, chose to stick it out at the airport overnight, having arrived at 8 a.m. on Thursday.

"It's now 2 o'clock in the morning at Gatwick, and it's very bright and very noisy. It's now also very cold," she said in a video shown on Sky.

"All I can see tonight ... is a sign that says 'no more sleeps until the beach'. And here we are, sleeping, in the stairs at Gatwick, because there's no flights."