All eyes on Venezuela military after protests, vote 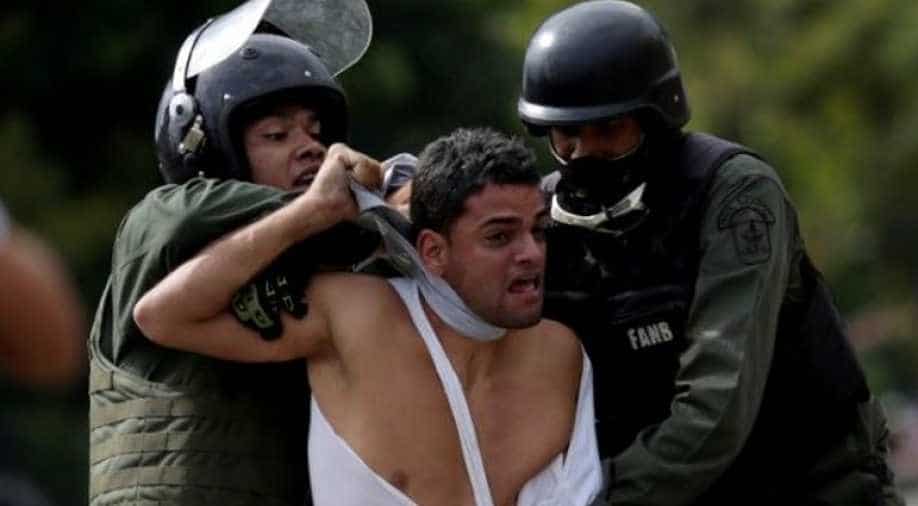 A demonstrator is detained at a rally during a strike called to protest against Venezuelan President Nicolas Maduro's government in Caracas, Venezuela Photograph:( Reuters )

The opposition is now looking towards the military to see if it will turn against the government and pressure Maduro to enact its demands||||There are signs of fatigue and division among troops who face constant street confrontations that frequently include volleys of rocks, Molotov cocktails, and even human excrement

Venezuelan soldiers are increasingly weary of the popular backlash against their role in quelling anti-government protests and all eyes are on the military to see if it will remain loyal to President Nicolas Maduro.

Nearly five months of demonstrations failed to stop Maduro carrying out a weekend vote for a Constitutional Assembly that opponents say will cement his dictatorship in the OPEC nation.

The opposition is now looking towards the military to see if it will turn against the government and pressure Maduro to enact its demands, which include presidential elections.

More than 120 people have been killed in the protests, drawing international condemnation of the security forces' heavy-handed tactics.

In an unofficial referendum last month, the opposition asked Venezuelans whether the military should defend the current Constitution and the National Assembly, which is expected to be dissolved by the Constitutional Assembly, in an apparent attempt to exert public pressure on the armed forces.

There are signs of fatigue and division among troops who face constant street confrontations that frequently include volleys of rocks, Molotov cocktails, and even human excrement. Soldiers chafe under the negative public opinion of the security forces caused by the crackdown.

"If we do not defend the regime, we are traitors and our careers are ruined. If we defend the government, we become enemies of the people," said a 40-year-old army sergeant major in the border city of San Cristobal with 18 years of service under his belt, asking not to be identified for fear of reprisal.

Protests appear poised to intensify after 10 people were killed in the weekend vote for the new legislative super body expected to give the ruling Socialist Party sweeping powers.

'Contempt of the population'

Like many others in the once prosperous South American country, members of the security forces struggle to eat properly because they earn just a few dollars a month, which is barely enough for a week's food.

Splits within the armed forces have been made evident since protests began with the detention of 123 members, including high-ranking officers, on charges ranging from treason and rebellion to theft and desertion.

"In the past, a soldier was respected but now, after this period of degeneration, a soldier gets the contempt of the whole population," said a 33-year-old Air Force major, also asking his name not be revealed for fear of reprisal.

At least publicly, military leaders such as Defense Minister Vladimir Padrino remain firmly behind Maduro, appearing alongside him at near-daily political events and military parades.

The military has played a key role in government since former socialist leader Hugo Chavez, himself a former military officer, swept to power in 1999 promising to bring greater equality to the economy of the oil rich nation.

Top government posts ranging from ministerial positions to directors of state oil company PDVSA are held by former military officers, many of whom participated in a failed 1992 coup that made Chavez famous and fuelled his meteoric rise to power.

Chavez purged the armed forces of dissidents following a 2002 coup that briefly toppled him.

But it is nonetheless difficult to measure military loyalty to Maduro, and predictions of military rebellions or imminent coups have repeatedly turned out to be false.

The Defense Ministry did not immediately respond to an email seeking comment.

Maduro critics say the government's count in the constituent assembly vote was rigged and the final turnout exaggerated three fold.

Soldiers were in charge of voting stations and the election raised doubts among them about their role defending Maduro, according to Herbert Garcia, a former senior army general, and minister.

"There is more division after Sunday. They saw it all," said Garcia, who broke away from Maduro's government in 2015 though maintains contact with some former colleagues.