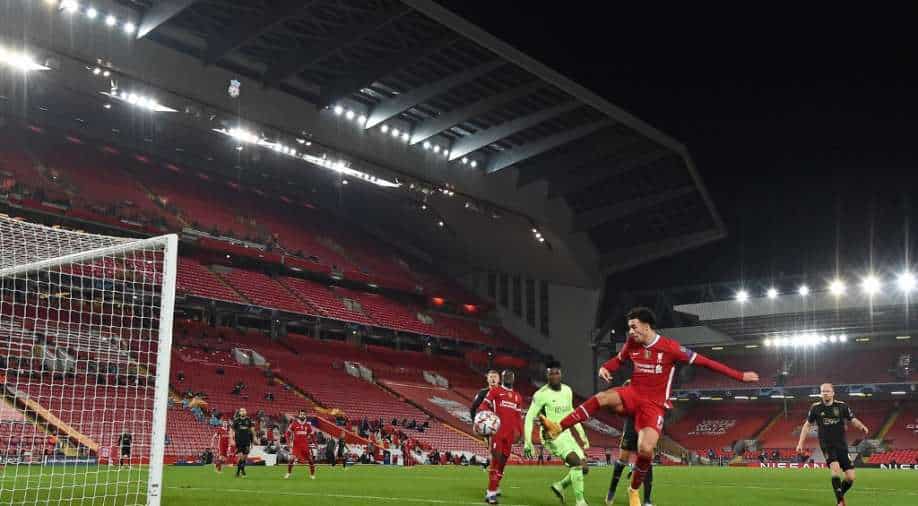 Curtis Jones sent a depleted Liverpool through to the Champions League last 16 on Tuesday, while Zinedine Zidane dismissed suggestions he might walk away from Real Madrid after another defeat by Shakhtar Donetsk left their European hopes in the balance.

Curtis Jones sent a depleted Liverpool through to the Champions League last 16 on Tuesday, while Zinedine Zidane dismissed suggestions he might walk away from Real Madrid after another defeat by Shakhtar Donetsk left their European hopes in the balance.

Liverpool were without a host of key players for the visit of Ajax to Anfield in Group D, with 22-year-old Irishman Caoimhin Kelleher starting in goal in the absence of Alisson.

Teenager Jones scored the only goal just before the hour, tucking the ball in after Ajax 'keeper Andre Onana thought he could afford to let a Neco Williams cross sail over his head.

The result was vital for the Premier League champions after their home loss to Atalanta a week ago, and it allowed them to secure a spot in the knockout phase.

"Honestly since I was at Liverpool that feels like one of the biggest Champions League nights. Without supporters in, it was the most important, most difficult, most exceptional," Liverpool manager Jurgen Klopp told BT Sport.

They will go through as group winners after Atalanta had to come from behind to draw 1-1 at home to Midtjylland, Cristian Romero heading in a late equaliser in response to Alexander Scholz's thumping opener for the Danes.

Atalanta are a point clear in second from Ajax, with the sides meeting in Amsterdam in their last game next week.

Two-time former European champions Porto also sealed a last-16 spot after drawing 0-0 at home to Manchester City, who were already through and are now guaranteed to top Group C.

Porto would have qualified regardless, because Olympiakos lost 2-1 to Marseille in France, with Dimitri Payet scoring two penalties in the second half to turn the game around after Mohamed Mady Camara fired the Greeks in front.

The result ends Marseille's Champions League record run of 13 straight defeats and means they could yet pip Olympiakos to third place and the consolation of a Europa League berth.

Real Madrid could yet be consigned to a similar fate after they went down 2-0 to Shakhtar in Kiev, their second defeat this season by the Ukrainians.

Shakhtar had lost their last two Group B matches against Borussia Moenchengladbach by an aggregate score of 10-0, but now move above Real into second place with one game remaining.

Gladbach are top by a point, while Shakhtar have the upper hand on Real thanks to their superior head-to-head record.

However, the damage was limited for Real after Inter Milan won 3-2 away to Gladbach to keep their own hopes alive.

Matteo Darmian put Inter ahead and Romelu Lukaku scored twice for Antonio Conte's side. Alassane Plea netted a brace for Gladbach but was denied a hat-trick, and a late equaliser, because of an offside call.

It means Inter are bottom of the group but could still qualify, while Real will definitely qualify as long as they win at home to Gladbach.

Madrid have made it out of their group in every year since 1997 and so failure to qualify would be seen as a disaster, but Zidane is not considering stepping down.

"I am not going to resign, not at all. We are always going to have difficult moments, and we are on a bad run, but we need to keep going," said the Frenchman.

Real's city rivals Atletico Madrid will also still have it all to do in their final group game after being held to a 1-1 draw at home by a weakened Bayern Munich.

Joao Felix gave Atletico the lead against a Bayern side who had already won Group A. Thomas Mueller won and then converted a late penalty to earn the defending champions a draw.

Salzburg can snatch a last-16 place if they beat Atletico at home next week, after the Austrians won 3-1 away to Lokomotiv Moscow.

Mergim Berisha scored twice in the first half for Salzburg, and Karim Adeyemi got their third goal after Anton Miranchuk converted a penalty for the railway-backed side.