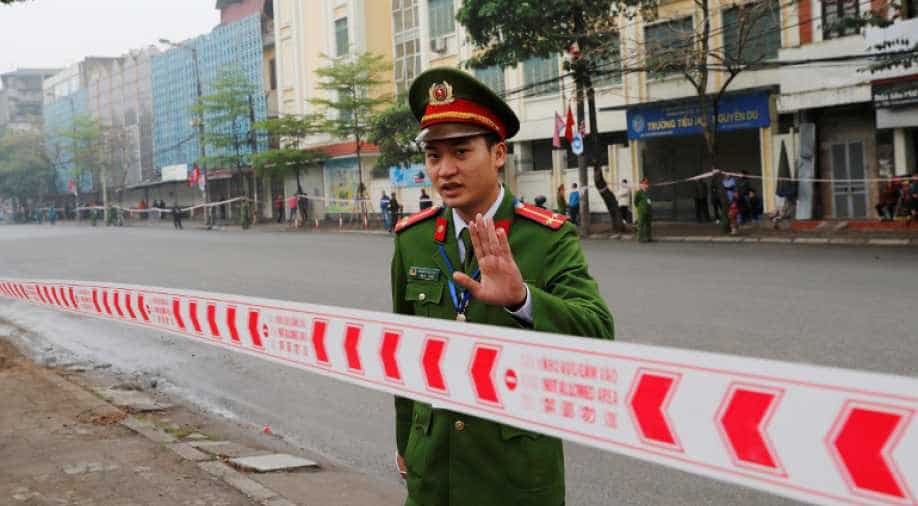 A policeman gestures behind a police line at a road block ahead of the North Korea-US summit in Hanoi, Vietnam. Photograph:( Reuters )

Despite sweeping economic and social reforms in Vietnam, the ruling Communist Party retains tight controls on media and does not tolerate criticism.

More than a dozen prominent Vietnamese political activists say police have stepped up surveillance and prevented them from leaving their homes in Hanoi as the Vietnamese capital hosts a summit between the leaders of the United States and North Korea.

Despite sweeping economic and social reforms in Vietnam, the ruling Communist Party retains tight controls on media and does not tolerate criticism.

Hosting the second summit between US President Donald Trump and North Korean leader Kim Jong Un has been seen as a public relations coup for Vietnam and Prime Minister Nguyen Xuan Phuc has said security should be a top priority.

Hanoi has branded itself a "city for peace" for hosting the summit.

Nguyen Chi Tuyen, an activist known as Anh Chi, said security officials had been stationed outside his house for two days.

"They follow me everywhere I go and warn me that I may be detained if I cross the river into the (city) centre," he told Reuters on Wednesday.

Police told him they will guard his house until March 1 and not to take photos of them, he added.

Vietnam`s foreign ministry did not immediately respond to a request for comment.

Trump and Kim meet on Wednesday evening at Hanoi`s French-colonial-era Metropole Hotel for the start their second summit in less than a year, seeking to break a stalemate over the North`s nuclear weapons.

Dao Thu Hue, a Chinese teacher at a university in Hanoi known for her anti-communist protests, said police started restricting her movements on Tuesday evening. Her house is often sealed off during major events.

"This time they are tighter and very determined. They don`t say why they are blocking my house, only say `we are following orders`," Hue said.

Bui Hang, an activist based in the southern city of Vung Tau, told Reuters someone had padlocked her door from the outside and glued it in place.

Some other activists said they managed to strike compromises with security officers.

"I have been under guard for several days but there is still room to negotiate," said activist La Dung, speaking as he was riding on the back a local security officer`s motorbike on his way to play a game of tennis.

"They said tennis is OK, but other things is a no," Dung laughed.

Activist Mai Phuong Thao, known as Thao Teresa, said she has been prevented from leaving her house since Monday.

Police looked into her house several times a day to see if she was there or to hear her voice, but she said she has her own way to leave the house when she needs to.

Singer and activist Mai Khoi posted a video of herself on Twitter sticking her middle finger up as Trump`s motorcade was passed on Tuesday night with a caption "Peace on you, Trump!".

Last time Trump was in Vietnam in 2017, she held a poster that said "Piss on you Trump".

She was locked inside her house for several hours after that protest.