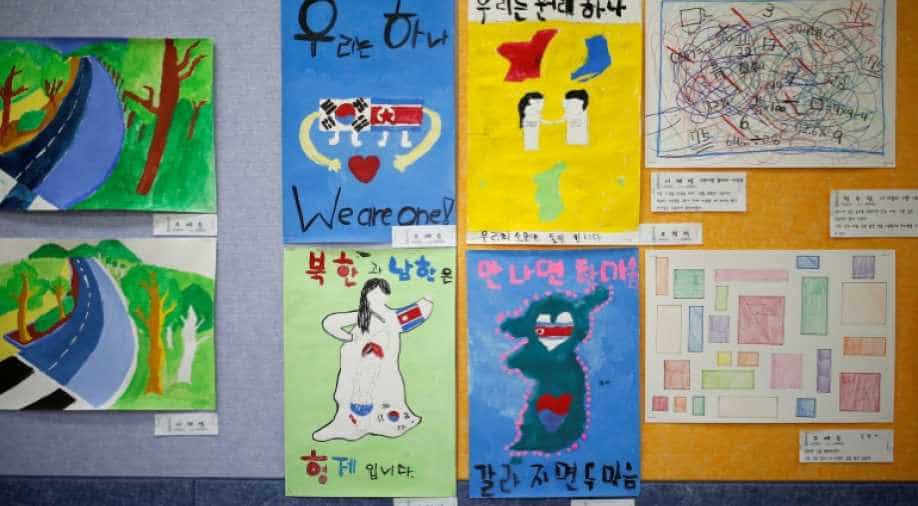 Posters bearing messages, wishing unification between the two Koreas, hang on a wall at the Daesungdong Elementary School, a school inside the demilitarised zone separating the two Koreas, in Paju, South Korea. Photograph:( Reuters )

A year of warming relations between North and South Korea has raised the prospects of closer ties, if not some form of unification for the still-warring neighbours far in the future. But it might not be obvious in a typical South Korean classroom.

"I really don't know anything," 17-year-old student Roh Ha-na said. "It`s like only twice a year that the school teaches about unification and national security, and about North Korean life... but I just let most of it go in one ear and out the other."This year`s inter-Korean détente has highlighted what many observers see as a lack of knowledge among South Koreans about their northern neighbour, prompting government efforts to revamp the way South Koreans learn about North Korea and unification.

"If we don't approach the issue in a rational manner or show how the issue affects (students') personal lives in middle school or high school, it will be difficult to keep their attention," Baek told Reuters in an interview.

The education shortcomings are contributing to a shortage of North Korea experts across public and private institutions at a time when increased cultural and governmental exchanges between the two Koreas make them all the more important, analysts say.

"Every regional government has rolled out plans for inter-Korean exchange, but they don`t have any experts, no knowledge, no networks," said Hong Min, a research fellow at the Korea Institute for National Unification. "When the heads of South Korean conglomerates went along to the September Pyongyang summit, most of them didn`t have an in-house North Korea expert to brief the chief."

After facing criticism at a parliamentary hearing earlier this month over funding cuts to education programmes, Unification Minister Cho Myoung-gyon told lawmakers creating a new curriculum on unification was "crucial and urgent".

Cut off from the North for 70 years and still technically at war after their 1950-53 conflict ended in a truce not a peace treaty, many South Koreans have come to see unification as an increasingly distant and unrealistic goal.

Surveys show younger generations of South Koreans are particularly ignorant or apathetic about their northern neighbours, seeing them as a troublesome distraction from the more pressing concerns of work or school.

Interviews with 17 high school students revealed most had never heard of the `parallel progress` policy key to North Korean affairs this decade. Most didn`t know about the growth of private markets that has transformed many areas of North Korea`s economy.

"I've never heard about these North Korean issues in school, aside from learning about the Korean War in history class," said Moon So-in, a 17-year-old student at Sunil Girls` High School.
"My friends don`t seem very interested since we are so used to being a divided country."

Education in South Korea is focused on competing for college entrance, culminating in high-pressure nationwide exams in the last year of high school, on which students stake their futures.

North Korea is "not on the test," students and teachers said, and is therefore seen as a "waste of precious time," said high school teacher Choi Ki-bok.

Generally, North Korea is addressed in a single chapter once a year in 4th and 6th grade, briefly in middle school and once in high school, two teachers said.

In higher education, meanwhile, five out of six North Korean studies departments at South Korean universities have been shut down or changed into other programmes in recent years, in part because of a lack of applicants.

In North Korea, the South appears to be discussed more often in schools. As well as propaganda, North Korean defectors say they were taught minute details about the South.

"I was taught South Korean geography down to what minerals and grains are produced in each region, history that happened on South Korean soil," said Park Na-ri, a North Korean defector educator who taught Korean and literature in Pyongyang and now teaches defector children in Seoul.

"I was shocked to find South Koreans know much less about where anything in North Korea is," she said, noting that ignorance can lead to a lack of empathy for North Koreans.

Five South Korean educators interviewed by Reuters said teachers don`t feel equipped to navigate the thorny issue of North Korea, which in the words of one high school teacher is "an enemy, a long-lost brother, and a separate country sharing a border, depending on who you ask".

The Institute for Unification Education, which oversees all lower education on North Korea, says it is setting up the first-ever year-long training programmes for teachers to learn how to teach North Korea.

That will include a shift away from rote teaching on unification as a given to a more flexible approach focused more on the goal of peace and designed to spark discussions among students.

This year, the 91-page "Unification Education Guidelines" was cut down to 48 pages and renamed "Unification and Peace Education, Directions and Viewpoints", mirroring President Moon Jae-in`s argument that reaching peace with North Korea is a more pressing and realistic goal than full unification.