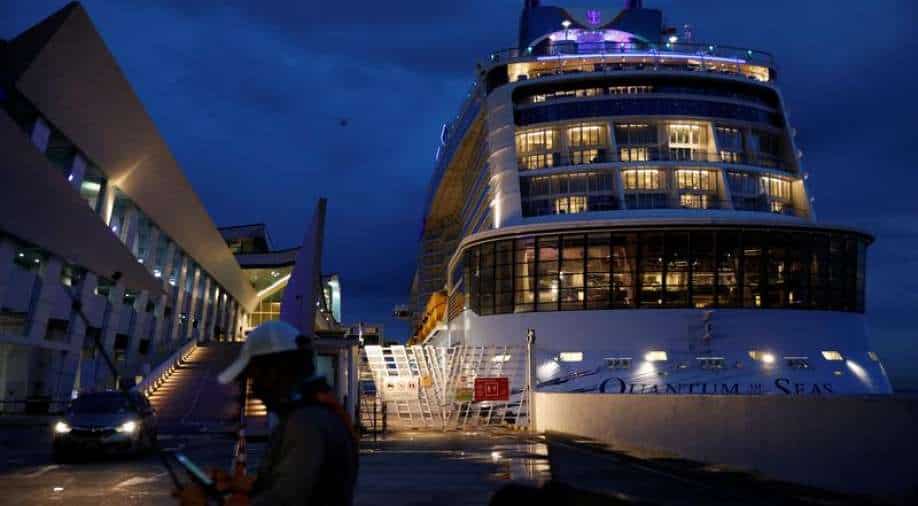 Passengers on Royal Caribbean`s Quantum of the Seas vessel were held in their cabins for more than 16 hours on Wednesday after an 83-year old man, who sought medical help on the ship for diarrhoea, tested positive for COVID-19.

A passenger who tested positive for COVID-19 aboard a `cruise-to-nowhere` from Singapore, forcing the ship to return to dock and nearly 1,700 guests to isolate, has been found not to have the virus, Singapore`s health ministry said on Thursday.

Passengers on Royal Caribbean`s Quantum of the Seas vessel were held in their cabins for more than 16 hours on Wednesday after an 83-year old man, who sought medical help on the ship for diarrhoea, tested positive for COVID-19.

When the ship returned to port on Wednesday, the passenger was taken to hospital where he took two further tests which did not reveal infection. A third negative test on Thursday led authorities to declare him virus free.

"A final confirmatory test ... has confirmed that the 83 year-old male Singaporean...does not have COVID-19 infection," the health ministry said in a statement, adding it would help review testing processes aboard the ship.

All guests and crew that had come into close contact with the patient would no longer have to quarantine as previously instructed, the ministry said.

Royal Caribbean said in a statement it welcomed the news and that it would continue to work with the government to "refine" its protocols.

Royal Caribbean had cancelled a cruise leaving on Thursday, but the city-state`s tourism board said the pilot schemes, which offer round trips from Singapore and make no stops, could continue as planned.

Genting Cruise Lines is also offering the trips which are only open to Singapore residents and are part of the country`s effort to revive a tourism industry which has been battered by the pandemic.

The resumption of Royal Caribbean`s cruises in Singapore last week were the Miami-based company`s first sailings globally since it halted global operations in March due to the pandemic.

Authorities said the incident was a learning experience and validation of the safety protocols in place.

"Yesterday`s incident has given us valuable learnings for future sailings...It has also given assurance that our established response to any future COVID-19 case is swift and effective," said tourism board chief Keith Tan.